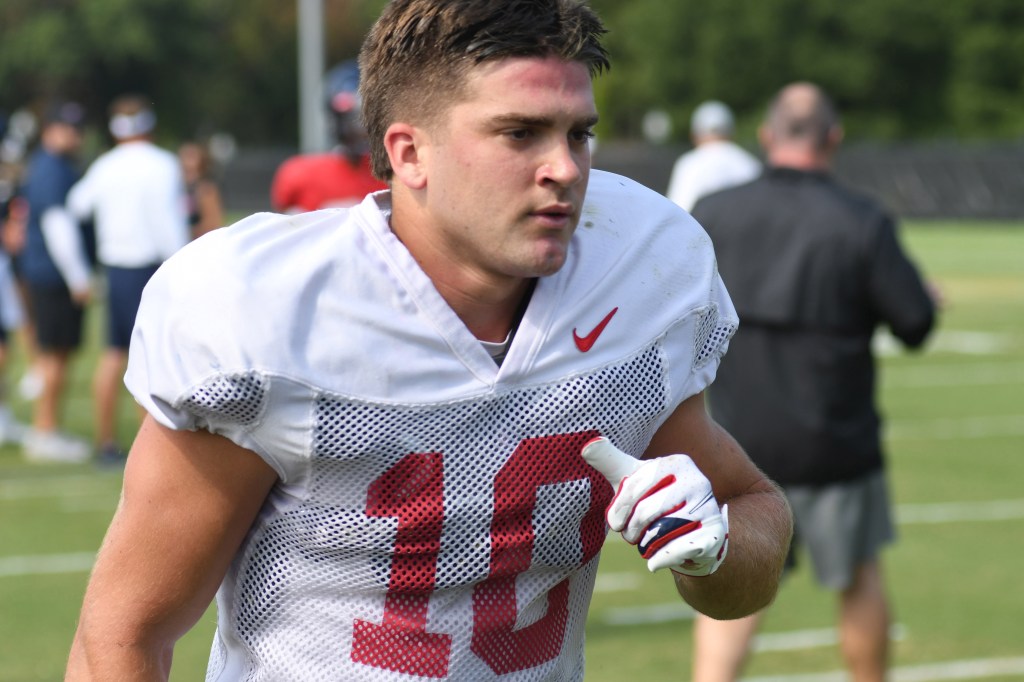 One of the highlighted question marks throughout all of the Ole Miss fall camp is John Rhys Plumlee and his transition from quarterback to full-time wide receiver.

The move was one that was anticipated over the course of the offseason after Plumlee spent time in the slot in the Rebels game against Indiana in the Outback Bowl last January. Not much was revealed in the following months due to Plumlee being with the baseball team during the Rebels spring practices, but over the past month he has ramped up learning process.

“The transition has been pretty smooth, other than coming from baseball,” Plumlee said. “You miss a lot of the spring and the running aspect of it. Got to get in shape really, really quick. I think the Indiana week really helped me out, just having a week of it under my belt. I’ve done a lot of learning about little things that I didn’t necessarily know about the receiver position.”

Plumlee was not on the practice for all off fall camp, battling an injury that sidelined him for some time, but with the season opener against Louisville less than a week away, he feels ready to contribute.

Matt Corral, who won the starting job over Plumlee throughout the course of the 2020 season, stated the former quarterback still has a “quarterback brain” and still processes plays and routes with a quarterback mentality at times. For Plumlee, that comes as an advantage when sitting in the receivers room.

“My first love playing the game of football was playing quarterback,” Plumlee said. “I love to do it. It’s probably still where my heart’s going to be. I love playing quarterback, I love doing that. But the transition over is pretty smooth, just because of the aspect of last year, the year before, having to know everybody’s assignments and all that.”

With the possibility of losing the starting spot to Corral being high, thoughts of exploring his options outside of Oxford and potentially becoming another member transfer portal club entered Plumlee’s mind. Though once baseball season ended in June he sat down with head coach Lane Kiffin and the two discussed Plumlee’s future.

The conversation proved constructive with Plumlee making the decision to stick with the Rebels.

“To say it didn’t cross my mind (to leave), I’d be lying to you,” Plumlee said. “But I love Ole Miss. I think I’ve started something pretty good here with my friends and my family that love Ole Miss. The people here, the atmosphere here at Ole Miss, the baseball aspect of it, a lot went into (the decision). I feel really blessed to be at Ole Miss. I’m happy I stayed.”