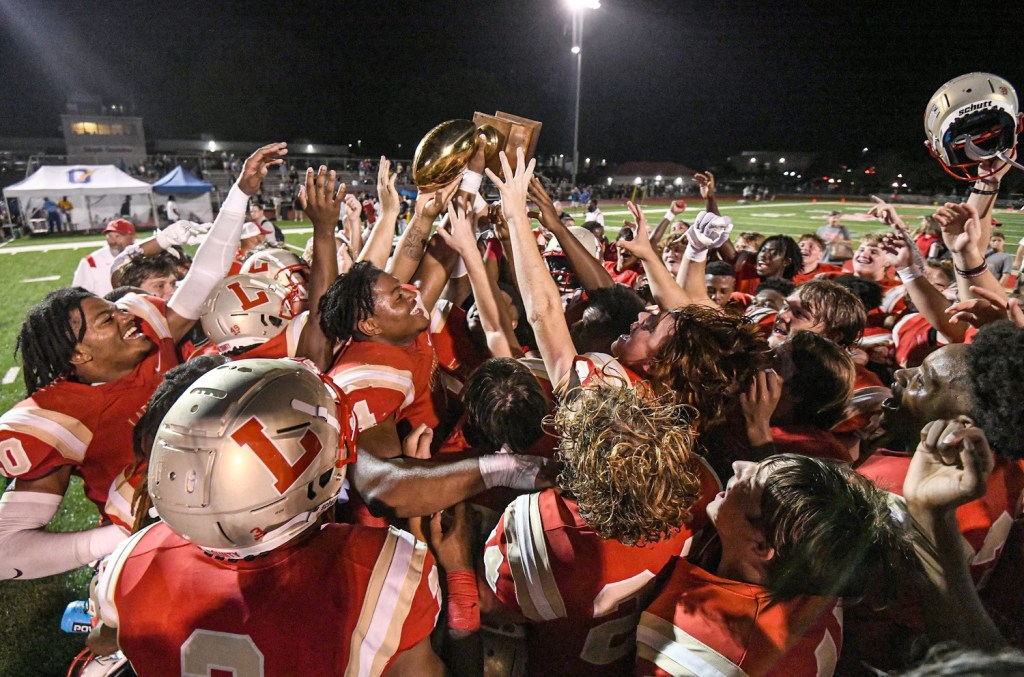 Lafayette players celebrate with the Crosstown Classic Trophy after the Commodores defeated Oxford 34-23 at William L. Buford Stadium on Friday. It was the first win in the series for Lafayette since 2016. (Bruce Newman)

The 50th edition of the Crosstown Classic did not disappoint as No. 5 Oxford and Lafayette battled it out to decide who gets bragging rights for another year.

The Commodores (3-1) scored 27 unanswered points to defeat the Chargers 34-23 at William L. Buford Stadium on Friday. It was the first win for Lafayette in the rivalry since 2016.

“For the first time all year we looked like a football team,” said Lafayette head coach Michael Fair. “We kind of executed in all three phases. … it’s fun to watch a team come together like that.”

The question entering Friday’s matchup was which strength of both teams would emerge over the other — Oxford’s offense or Lafayette’s stout defense that has allowed only 25 the first three games of the season.

The answer was not an easy one to figure out the firs two quarters with the Chargers and Commodores lighting up the scoreboard.

Oxford (2-2) jumped out to a quick 9-0 lead after an opening field goal and touchdown catch by tight end Jack Harper in the first five-plus minutes into the game.

Lafayette responded on the first play of the second quarter when running back Jay Reed scored off a three-yard run to cut the deficit to two points at the time.

The Chargers answered with scoring drive of their own, capped by a three-yard touchdown run by Roman Gregory.

Decisions on fourth down for both the Commodores and the Chargers in the first half changed the complexion of the game each time. Lafayette chose to punt it near midfield on fourth and short and did not convert, leading to a Charger touchdown by Tracey Harris off a 13-yard run.

“A lot of credit to (Lafayette). They did a great job,” said Oxford head coach Chris Cutcliffe. “We’ve got to be a better prepared team. We made mistakes in the kicking game, which we take personally. We’ve got to do a better job getting our team ready to play.”

Late in the second quarter, Oxford opted to go for it on four down and did not convert. The next play, Kylan Vaughn scored on a 55-yard touchdown catch to make it a 23-21 Charger lead at halftime.

Lafayette put the exclamation mark on the game with a 25-yard touchdown run by Reed in the final minutes of the game. Reed finished with three touchdowns on the night.

“I thought we were playing really tight (early),” Fair said. “We missed tackles, which was a little unorthodox for this group, defensively. It was almost like we were playing not to screw up and once we got over that and started playing ball, I think this is what we’re capable of.”

All the prep work is over as both Oxford and Lafayette enter region play next week. The Chargers host Murrah for Homecoming to kick off their first season in Region 2-6A while Lafayette travels to its old rival West Point to begin their 1-5A slate.