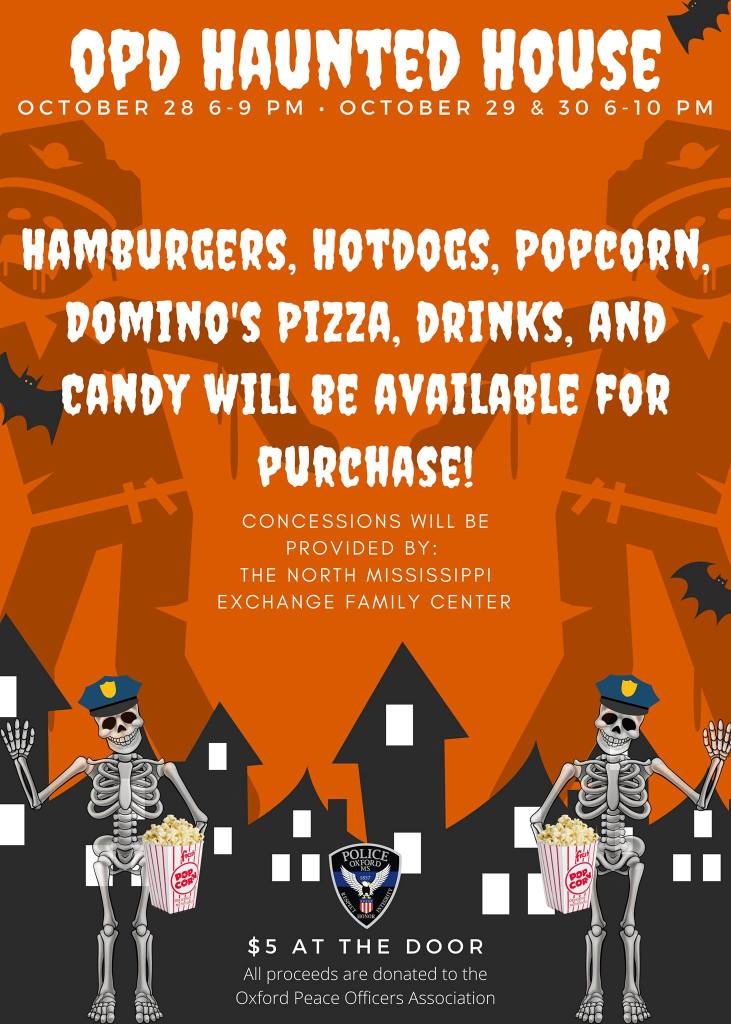 The Oxford Police Department is preparing the shocks and the scares for the community for their three-night Haunted House event at the OPD’s training building on Oct. 28 from 6-9 p.m. and Oct. 29-30 from 6-10 p.m.

According to OPD’s Captain Alan Ivy, the spooky event started 15 years ago to entertain the children living at Riverside Place. As the years went by attention for the haunted house grew even as the police department changed locations nine years ago.

“It’s a fun thing for us to do and it’s a way to reach the community in a different way than we normally do,” said IV.

The public has the opportunity to take blood-chilling adventure with the OPD that will cost $5 per person at the door.

Scares will be served with an assortment of food and treats for purchase at the concession stand run by The North Mississippi Exchange Club. Guests can enjoy hamburgers, hotdogs, popcorn, Domino’s pizza, drinks and candy.

OPD will  donate all the proceeds to the event to the Oxford Peace Officers Association. OPOA is a non-profit organization that assists officers and their families with medical and financial needs and other groups of the community that the OPD chooses.

“Two years ago we raised enough money to buy the trauma kits to go in every classroom at Oxford and Lafayette schools,” said Ivy. “We’re always looking for a cause and it varies each year.”

This year, funds will go to helping two babies a part of the OPD family who are receiving care at St. Jude’s Children’s Research Hospital. Additionally, the OPD has adopted one classroom at ICS Mary Cathey Head Start for Christmas.

“It’s become where people expect it and they come and get scared,” said Ivy. “When they come and form a long line outside, officers take that opportunity to mix and mingle. It gives us a chance to talk to the public and assists in other places.”

Organizations and businesses have provided their assistance like the Oxford Fire Department, Communicare, Ross Family Dental Clinic and Family Crisis Services of North Mississippi and Ivy said all the help they have provided with previous events.

“It’s a time for us to come together as a police department,” he said.