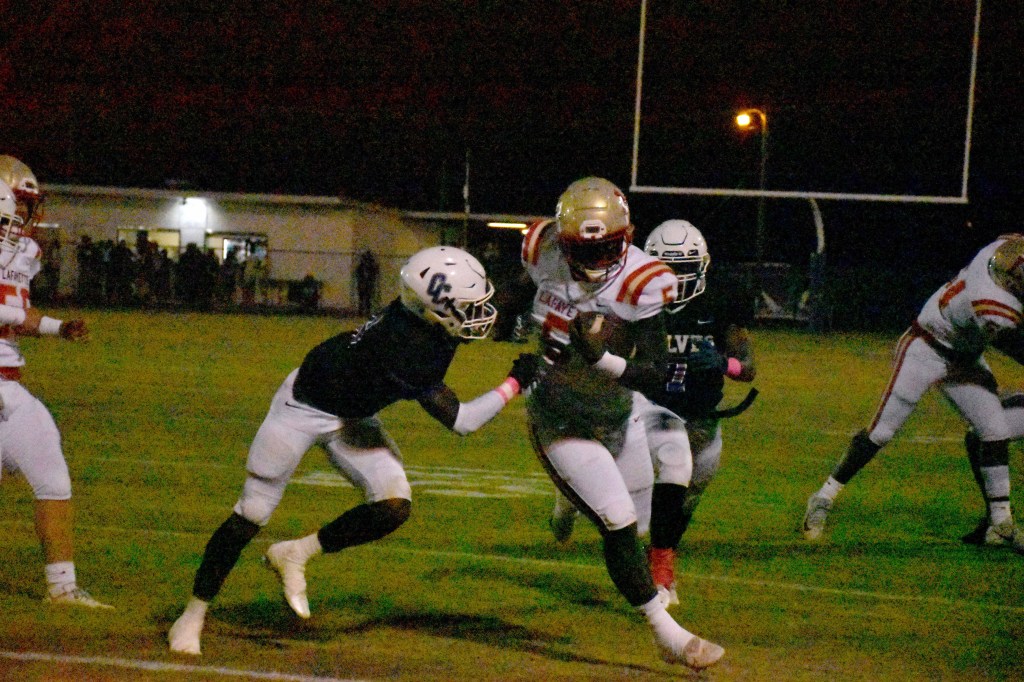 CLEVELAND — The banged up Lafayette Commodores went into the locker room after failing to stop a large Cleveland Central offense on each drive. Despite that, head coach Michael Fair told his team that the Wolves won’t score again. It turns out he was correct when it was all said and done.

The Commodores (7-2, 4-1 Region 1-5A) erased an early 11-point deficit and scored 21 unanswered points to leave Cleveland with a 28-18 region win over the Wolves. Throughout the night, Lafayette used a running game by committee while the defense found a way to come up with stops and ultimately the win.

“That’s what good teams do,” Fair said. “We played hard and our guys never wavered, coaches never panicked. I took so much joy out of watching our coaches coach tonight because they are the best coaching staff in the state. They proved it tonight.”

Starting off, the Commodores made things look easy, capping off a 10 play opening drive with a three-yard touchdown run by D.J. Burnett. Lafayette had a 7-0 lead with 8:28 left in the opening quarter. Then, things went south for them immediately.

The Wolves responded with a pair of good runs by Jamarion White that later resulted in a two-yard score by Myles Griffin. After Reed coughed up the ball on his team’s own 38-yard line, Cleveland Central scored again with Jaryn Kelly connecting with Myles Griffin from 18 yards out, giving the Wolves their first lead of the night.

Lafayette reached the Cleveland Central red zone early in the second quarter, but would turn the ball over again. Fair threw an end zone pick to Jaylen McRoy and the Wolves moved straight down field again. Kelly found Griffin again for a 31-yard touchdown strike and suddenly, Lafayette found itself down two scores, 18-7 with 3:58 left in the first half. The Wolves failed to convert all three two-point conversions in the process.

“They have a really good back and have three of the largest high school football players I’ve ever seen,” Fair said. “When you go out there and see a guy that’s 6’8 and the second half rolls around, you think ‘that guy is just like I am.’ We needed to get back to our technique and we did that.”

However, the Commodores would gain a little life going into the locker room as Makyi Reed-Jones scored a 25-yard rushing score to trail only four points.

The Commodores finally recorded a stop to begin the third quarter, forcing a punt and soon retaking the lead. Burnett scored his second rushing TD of the night and Lafayette had a 21-18 lead with 6:06 left in the third quarter. Early in the fourth quarter, Will Dabney’s punt pinned Cleveland Central down near their own goal post.

A big run by White put the Wolves near Lafayette’s red zone, but the defense held and forced a turnover on downs. The Commodores ran out the remaining clock to win their fourth straight game.

“I love this team,” Fair said. “They never blinked. They brought the same effort regardless. They are a joy to coach.”

The Commodores return to William L. Buford Stadium next Friday to continue Region 1-5A play against the Greenville Hornets. Kickoff is set for 7 p.m.