Jellema makes miniatures and memories that endure with 3D Miniz 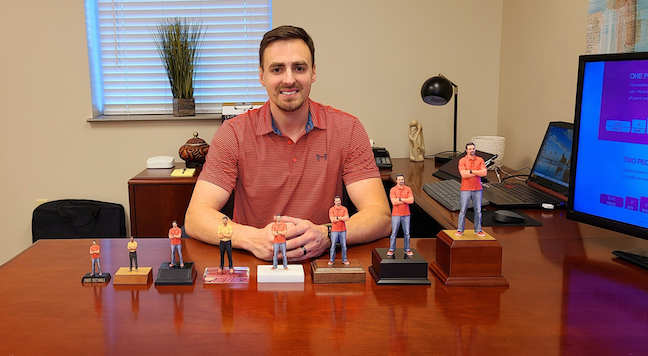 Chris Jellema is changing how people make memories and how long those memories can last through 3D Miniz, a miniature model business that can create replicas of anyone.

The shelf in his office in the Oxford Enterprise Center features miniature versions of the man himself in sizes ranging from three to eight inches. Jellema disclosed that when he presents the models to customers he tries to wear the same orange and denim or yellow and black ensemble for fun.

Jellema took photography to the next level by offering this novel alternative to the two-dimensional photograph.

“Everybody can take photos and they end up on your phone but what happens when you lose those photos?” said Jellema.

It can be uncanny but the three-dimensional models capture the likeness and feel of it’s subject and make moments even more real than what you can see with a regular photo.

During his college years, Jellema participated in business training simulations and even sold car tires and rims at a time where it was a huge market at the time. Through his experiences, he became more and more interested in the industry.

“As a broke college student I was buying and selling whatever I could,’” said Jellema. “I always thought ‘I’d love to get into management or maybe running a business one day.’”

Jellema currently works as a patient care technician in hospice but Jellema pushed forward on making his dream a reality. His goal was set aside for a time as he worked different jobs and eventually, but after moving to Oxford in 2015 with his wife, he picked back up where he left off and fell into research on 3D printing just as the industry was taking off.

“I thought it was the coolest thing,” said Jellema. “What some were trying to do with 3D printing was people. People were taking a sensor, plugging it into a computer and using this custom software to walk around you and make a 3D model. It wasn’t very good and only in one color, but I thought it was possible to make a model of a person.”

Jellema was even more motivated to find a better way to capture loved ones by the death of his grandparents, who he had a strong relationship with. He regrets never being able to have 3D models of them but he offers the opportunity to everyone interested to have physical representations of their loved ones in full color.

“I was really close to them and really wanted to have a photo of them and I wished that I had a physical representation of them then I remembered [3D models],” said Jellema. “It would’ve been so nice to have been sitting out, just to see.”

Through his job in hospice, Jellema witnessed the grief of patient’s families and how they would cherish different things about the person.

“They’ll do shirts and memorials, but there is no physical representation,” he said.

Through the help of the Small Business Development Center and the Oxford-Lafayette County Chamber of Commerce, Jellema was able to find resources and draw up plans to officially start his business.

Typical 3D color printing machines can cost up to $60,000 but Jellema was able to recreate the identity of an individual or the connection of a tight knit family through partnership with a company based in the United States for a full color printer and talented 3D artists that help on more extensive jobs.

These life-like replicas aren’t just for those who want to keep memories of loved ones or special occasions like weddings or graduations. They can be for people who want to see themselves in their professions or interests. From football players to firefighters, 3D Miniz are perfect for any person who wants to commemorate a special part of their life.

Interest around 3D Miniz is spreading fast. Athletic departments, Greek organizations and even commissions in the LOU community see the value and novelty in Jellema’s business and are eager to get models made for their athletes and community members.

With business taking off, Jellema hopes to expand his business and get more people interested in the future of making memories. The enthusiasm people show when they encounter these replicas, whether it’s their own or someone else’s, is one of the reasons he loves this business, said Jellema.

“It’s fun for me to offer something completely unique,” said Jellema. “Everybody’s unique in their own way and this is something special to them.”