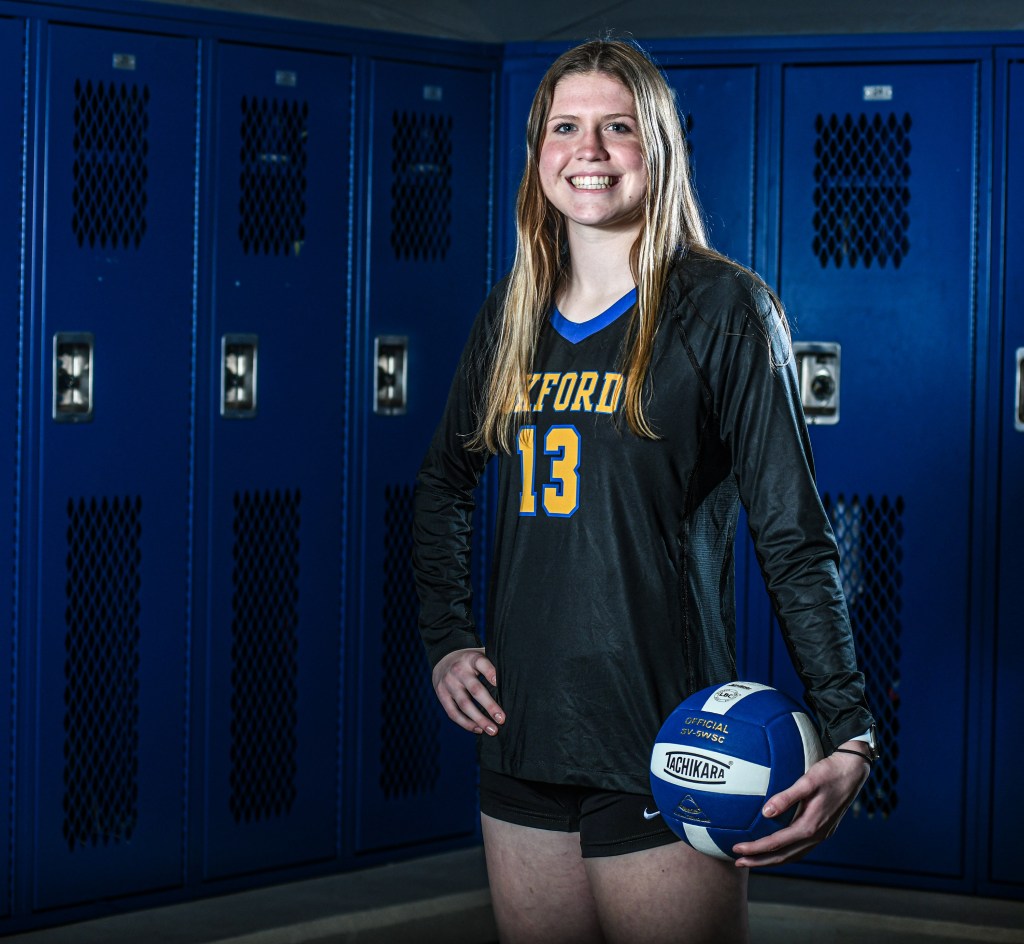 Oxford's Ainsley Tacke is the Oxford Eagle’s Player of the Year in volleyball for 2021. (©Bruce Newman)

Ainsley Tacke knew the Oxford volleyball team was going to have a special season this year and she wanted to make sure she did everything she could to do her part.

The offseason training and desire to become more of an “all-around” player paid off as Tacke had a career 2021 season, paving the way to her being named the EAGLE Player of the Year.

Despite suffering an injury midway through the season, Tacke returned and managed to be one of the Chargers top producers at the net. She recorded a team-high 306 kills and tied for a team-high in aces with 55. The rest of Tacke’s stat line included 166 digs, 39 blocks and 23 assists.

“I really worked on becoming more of an all-around player (in the offseason),” Tacke said. “In years past I just played front row and I knew that I wanted to stay on the court and help my team as much as possible. So, I really worked on my back row and my passing and digging and serving as well.”

With the help of her club team coach, Tacke worked hard in her private sessions and when she returned to preseason workouts in the summer the increased improvement in her game was noticed. She also took advantage of all the summer camps she could participate in.

“I noticed that I was passing better than I used to be and I was digging balls that I didn’t use to dig,” Tacke said. “I was able to make plays out of what I was doing.”

Once the season concluded for Oxford in late October, who ended the season as the Class 6A state runner-up,  Tacke finished with one of the best individual stat lines in program history. Tacke leaves Oxford with 938 career kills, 359 digs 240 blocks and 118 assists. The career kills number for Tacke is second all-time in program history only behind Maggee Hobson’s 966.

Hobson, who was named the 2016 Player of the Year has the record for most kills by a pin hitter, but Tacke’s 938 kills is the most by a right side hitter.

“I thought (Tacke) got a lot better, especially from last season,” said Oxford head coach Ashley Martin. “Going into this season as a six-rotation player and then she was out for four games with an injury and I thought she came back really strong from that. … I thought she did really well coming back from that because you don’t always see that. Sometimes you can see a mental drag or just kind of, ‘Ugh, someone’s playing in my spot,’ all those things that you can sometimes see. But I thought she did a really good job coming back and being a leader.”

While it was a team effort to get back to their first state championship match since 2016, there was a core group of players that provided consistency for Oxford.

If Oxford was scoring a point it was more times than not due to the Bianco setting up her teammates for success. The senior recorded a team-high 722 assists this season, which helped her eclipse the career mark of 2,000 assists as a Charger. Bianco also recorded 187 digs, 98 kills, tied with Tacke with 55 aces and also had 31 blocks.

For Lyons, it was a balance offense and defense night-in-night-out. She finished with 186 kills to compliment 182 digs along with 52 aces, 25 assists and 15 blocks.

After seasons of making late postseason runs, Lafayette finally got over the hump to reach their first state championship game in program history this year.

The result did not go the Commodores way, but it was a season built around the play of three players who helped get them their first Class 5A North Half title. Kailey Gooch, Harmony Jackson and Chloe Carr represent Lafayette on this year’s All-Area team.

In her senior season, Gooch finished with a team-high 258 kills to go with 65 blocks and 54 aces. If Gooch was not put the ball on the court in opponent’s territory, Jackson was doing it in her stead. The sophomore hitter finished the year with 224 kills, 71 digs and 23 blocks.

As a freshman libero, Carr showcased her defensive skills with a team-high 362 digs. Carr also provided some offense with 65 service aces and 32 kills.

The Blue Devils went undefeated in region play but saw their season come to an end in the second round in a loss to Alcorn Central.

The 2021 campaign for Water Valley was a successful one and aided by the play of Chloe Clement and Cora Story, who represent the Blue Devils on this year’s All-Area team.

Clement served up point after point for her Blue Devil teammates, recording a team-high 267 assists. No other player recorded more than 26 assists on the season. She also finished with 38 aces, 15 blocks, 13 kills and five digs.

Leading the defensive effort was Story, who recorded a team-high 31 digs on the season. She also finished with 31 kills and six aces.

For the first time in school history, Regent’s School of Oxford hoisted up a championship in a girls sport as the volleyball team won the MAIS Division III state championship last month.

In only Kacie Hengler’s second season as head coach, the Lions dominated the two-day tournament to secure their first state title.

The play of Myla Muerrier and Lauren Niemeyer helped lead the Lions to success and also earn them a spot on this year’s All-Area team.