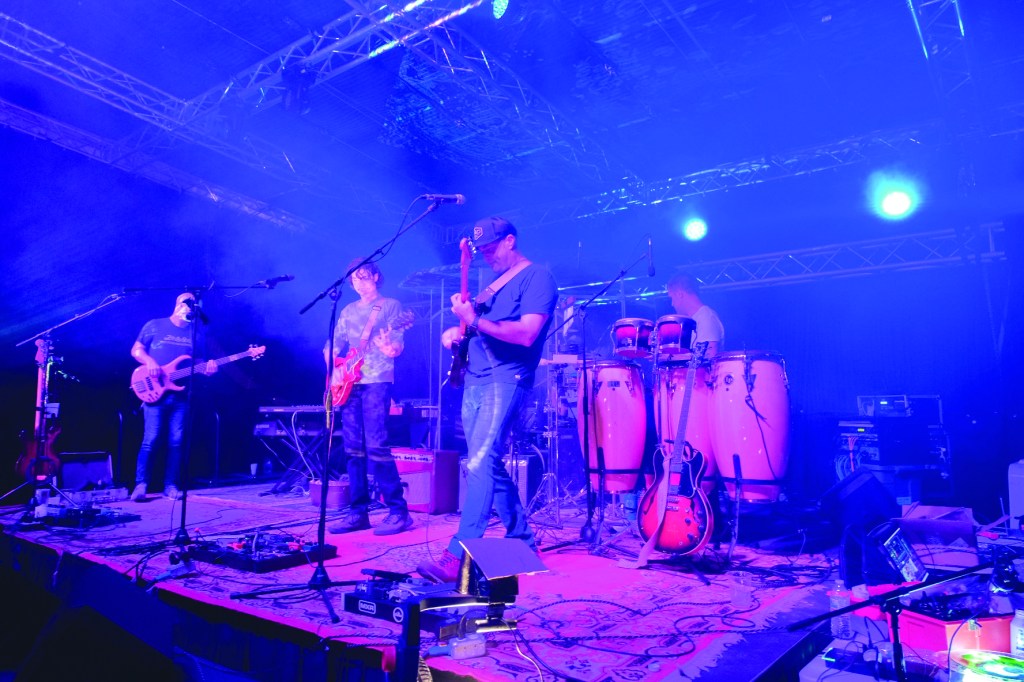 Six-piece progressive rock and soulful funk band Madrik has been a breath of fresh air for Oxford live music fans since arriving on the scene in early-2019.

The local “supergroup” consists of mainly seasoned players who’ve indulged in varieties of musical ventures around town for well over a decade.

The group firmed up the designation of local music venue Proud Larry’s as their home base, with three successful live appearances there spanning from April 2019 to April 2020.

Other appearances of note have included Batesville SpringFest, Wonderbird Distillery in Taylor, Mississippi, and most recently an October show at The Green at Harrison’s, a new outdoor venue on Harrison Avenue in Oxford.

Along with most other things, Madrik got sidelined by COVID-19, and the band was left only to anticipate a fourth show at their home venue for well over a year.  But on the evening of Friday, Nov. 12. The group returns, and a couple of the members recently provided insight into what the audience can expect.

“We try to make every show new and unique,” said bassist Nathan Robbins.  “We switch our setlist around a lot,” he said, adding that bandmates emphasize rehearsal time as a key element to the group’s growth.

Robbins explained that with every rehearsal typically comes a new song – and sometimes multiple songs  Or, a song the group had been working on, but was unable to yet perform live, may come to fruition just in time for an upcoming show.  Robbins said that with more time between shows, there is “more likelihood of new material.”

With regards to what goes into preparation for a six-member music group, Robbins said, “we’re always trying to make it more efficient.”  Robbins, who is also the IT Manager at North East Mississippi Electric Power Association, has a natural savvy for technology, which by default puts him in charge of much of the production aspect of the group.

“I’m always looking at it from a production standpoint in the interest of, ‘what can I do to make everybody able to concentrate on the music, but also use technology and the advanced things we have access to – to make the experience better?’”

Singer/guitarist Austin Smith also weighed in about the significant amount of preparation involved with Madrik. “The group is large and there is a lot to coordinate so we aren’t stepping on each other’s toes, in regard to sound dynamics,” he said. “Thankfully, Nate finds new, interesting ways to make everything a little bit easier for the next rehearsal or show.”

Smith said Robbins, along with drummer/percussionist and founding member Bradley Gordon, will prepare the practice space (typically at Gordon’s studio in Water Valley) so that other members can, for the most part, just arrive and start playing.

“We can set up quickly and run off of ‘in-ear’ monitors, so we don’t waste time checking levels, etcetera. Granted a lot of the technical aspects go over my head, but he (Robbins) certainly understands it.”

As far as the creative process of Madrik, Smith called it, “honestly, one of the more interesting processes of all the bands I’ve played in. No one comes in with a complete idea – just a cool beat, riff or progression, and we just play with it and keep the elements we like,” he said.

“We record our practices so that we can have some time to build off those ideas.”  And correlating with Robbins’ own assessment of the process, he added; “we’ve got a new song by the next time we hit it.”

The band was originally the brainchild of Gordon, who had also performed for years under the name DJ Gordo, and pursued the idea of creating ‘house’-type music but with organic instrumentation. “Sort of electronic but with a live band,” said Robbins, to describe Gordon’s idea of building live music over a ‘four-on-the-floor’ beat, found most commonly in electronic music, or disco.  But then it “evolved and morphed,” he said, of the band’s sound.

“If you listen to some of our earlier tracks you can hear the house beat as the driving component,” Smith added. “Our newer stuff has borrowed elements from other genres, like funk, blues, and soul.  We definitely have molded many genres and display different elements of them through different songs.  We’ve got material that’s very light, ethereal and dance-y – on to harder rock.  All of us have different musical backgrounds, and that helps us create a rather unique sound.”

The product of a musical family, and illustrious sideman for numerous regional musicians, Robbins distinguishes Madrik from other excursions by calling it a “collective creative experience.” He said, “no one person is building these tunes.  They’re alive and flowing through the whole band. And everybody’s touch is on all of these songs.  Not just from a performance perspective, but from their inception – which is a unique experience, especially with a band that size.”

The unusual-sounding band name came about when founder Gordon’s young daughter went through a phase of being excited by magic, and would repeatedly mispronounce the word as maaadrik.

“So, it’s kind of a take on magic, which it really is with all of us together,” said Robbins. “It’s sort of appropriate in that sense.”

Similarly, to Robbins, Smith maintains other endeavors with hopes of sustaining and bringing balance to his music. Aside from managing and bartending at Proud Larry’s, he’s currently doing an MBA program.

Following suit, keyboardist/synthesizer player Eric Carlton has earned the leisure of his musical venture by enduring grueling hours as an RN at Baptist Memorial Hospital. Lead guitarist Chris Steiner works as a manager at Regions Bank, while drummer Johnny Lott, much like Robbins, has indulged in a myriad of local music projects.

Looking beyond the Nov. 12 show at Proud Larry’s, Smith said, “I think just as our sound has changed since 2018 up until now, it will continue to change. Luckily, we all think this project is pretty special, so we focus on keeping the sound unique and interesting. We’re really just trying to create something different, especially for this region.”

Streaming music for Madrik is available at soundcloud.com/madrikmusic, and tickets for the Proud Larry’s show are at eventbrite.com.