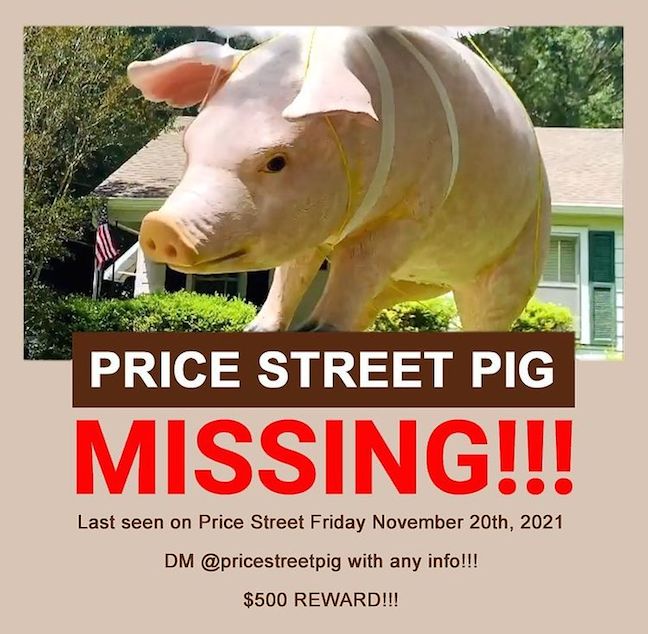 The owners of the Price Street Pig are offering a $500 reward to the person who will return their stolen, life-like pig. (Graphic: Francis D. Bacon - @pricestreetpig/Instagram)

The owners of the Price Street Pig are offering a $500 reward to the person who will return their stolen, life-like pig.

The pig named Francis D. Bacon was stolen late Saturday night by two unknown individuals. In an Instagram video posted by the owners, two people– one in a red jacket, another in a white top– were seen taking the pig off the porch.

Big Bad Breakfast made a statement on the Instagram post urging for the return of the pig to Price Street or for it to be left on the porch of Big Bad Breakfast located on North Lamar Boulevard.

A $500 reward is being offered in return for the pig.

Francis Bacon was a movie set prop in Los Angeles and later came into filmmaker Ryan Byers’ possession after learning of a catering company’s plans to dispose of it.

The prop has gained a following since settling down in Oxford and residents and visitors are known to stop by the Price Street property to take photos with it.

If anyone has any information about the Price Street Pig, contact the owners on Instagram through direct message @pricestreetpig.