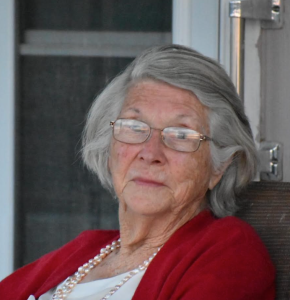 Carolyn Dunn, 94, of Oxford MS, died on November 15, 2021, in Gallup, New Mexico. A Celebration of Life was held in Gallup on November 22, 2021.
Carolyn Holdway Dunn, daughter of Sarah Sallie Pearl Kerlee and Herman H. Holdway, was born in Black Mountain, North Carolina on May 26, 1927. Carolyn is a fifth generation descendant of the original settlers of Black Mountain (originally known as Grey Eagle). Carolyn grew up in Black Mountain and nearby Montreat, where her father was the architect of the stone buildings at Montreat College. She was schooled by the missionary teachers at the Montreat Presbyterian Assembly.
During World War II, after graduating high school, Carolyn was recruited by the Federal Security Agency Office of Community War Services to serve in Washington DC as inventory clerk to the Office of Strategic Services (OSS). (The OSS was the precursor to today’s CIA.) She served our nation during war time issuing and receiving spy equipment. She was promoted to secretary to the CIA Chief of Personnel and the Congressional Liaison Chief-Security Branch. She held top secret clearance.
After the war, Carolyn moved to New York and performed with the team of beauties that supported Magician John Calvert. This famous act played across the U.S. and Carolyn laughingly said her job was to chase the duck when it “disappeared.”
Coming home to North Carolina, Carolyn worked as secretary to the Manager of the Biltmore Forest Country Club, where she met John Edward Dunn, Jr. They married on March 17, 1951, at the historic Biltmore Baptist Church built by George Vanderbilt. Carolyn and Ed traveled extensively with Ed’s career in the U.S. Public Health Service (USPHS) living in North Carolina, South Dakota, New Mexico, Kentucky, and Illinois.
After leaving the USPHS, they lived for four years in Saudi Arabia where Ed worked with the Arabian American Oil Company (ARAMCO). During this time, Carolyn delighted in international travel. Returning stateside, they lived in Massachusetts and Florida. It was in Orlando that Carolyn rejoined the workforce, working with Roy Disney during the development of Disney World Orlando.
Another overseas adventure awaited as the family moved to Tunis, Tunisia, where the expat community was full of missionaries, diplomats, doctors, dentists and others serving with Ed at Project HOPE.
Stateside again, the family moved to Chandler, Arizona, where Carolyn was hired as the secretary to the Mayor in 1975. Carolyn stayed with the City of Chandler as the City Clerk for 27 years. She served with nine Mayors, worked over 1,250 city council meetings, and oversaw every city election. During her tenure, Chandler grew from a population of 25,000 to over 250,000. In November 2000, the city proclaimed Carolyn Dunn Week and in June 2002, Carolyn Dunn Day.
Carolyn was an active member of the International Institute of Municipal Clerks (IIMC) and served on several committees. In 1986 she received the designation of Certified Municipal Clerk (CMC) conferred by the IIMC. Carolyn was also a member of the Arizona Municipal Clerks’ Association (AMCA).
In 1977, Carolyn achieved her college dream at Mesa Community College where she was tapped into the Phi Theta Kappa National Honor Fraternity.
In retirement, Carolyn moved from Chandler to her ranch home in Gallup, New Mexico to be near her daughter Susan Dunn Eddy, and also to her southern retreat in Oxford, Mississippi near her eldest daughter Marion Dunn Tutor. Carolyn enjoyed warm friendships wherever she lived. She cared for all God’s creatures-with an especially soft heart for her pets. Later in life, Carolyn grew closer to her roots and attended family reunions in Black Mountain.
Carolyn had a great faith and lived a life full of prayer and care for others. From Carolyn’s first job as the switchboard operator at Montreat College, where she would walk home in the deep dark shadows of the mountains, she could see the snakes that crossed in front of her…yet none bothered her. As Carolyn wandered cities all over the world with three children, nothing bad happened. She walked with God throughout her life.
Carolyn was preceded in death by her parents, her husband Ed, her siblings: Maxine Holdway, Mary Louisa Holdway Espinoza, Roger (Bud) Holdway, and Cornelius (Neil) Holdway, and Sister-in-law Mrs. Roger (Marie) Holdway, and nephew Ronald (Ron) Lee Holdway.
She is survived by her children Marion Elizabeth Dunn Tutor and Glennray Tutor of Oxford, MS, Susan Ann Dunn Eddy and Walt Eddy of Gallup, New Mexico, and John Edward Dunn, III and Irene Seigrist-Dunn of Geneva, Switzerland; granddaughters Chloe Aliene Marion Dunn Lee and Shawn Lee of Singapore, Audrey Elsa Carolyn Dunn of Geneva; grandsons Elliot Emory Thomas Dunn of Geneva, Philip Gentry Eddy and Reno Eddy of Gallup; great granddaughters Joy Emma Lee and Lydia Grace Lee; sister- in-law Teresa Falco Holdway; nieces Marie Espinoza Supthin, Patricia Espinosa Williams, Tina Espinosa Justus, and Elizabeth Holdway; nephews John Anthony Holdway, Daniel E. Holdway, Melvin Espinosa, and Roger Eugene (Gene) Holdway-whose father taught her to drive in his jeep.