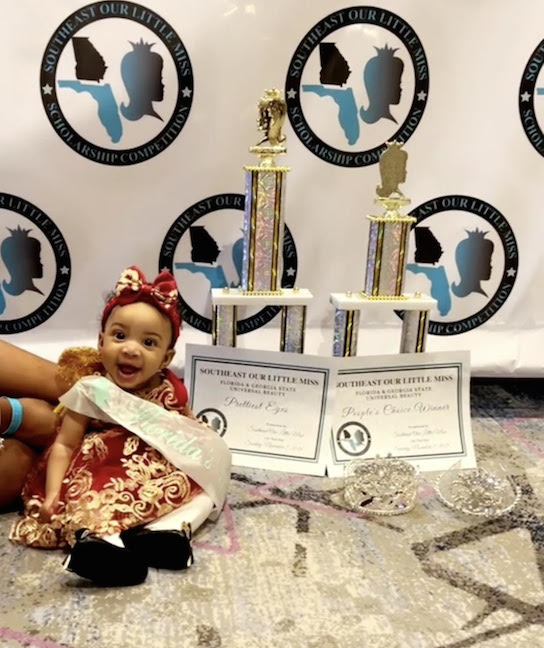 Former Oxford residents Khari and Nico Turner are seeking sponsorships for their daughter to help her compete in an international beauty competition in Texas.

According to Khari, a portion of the competition requires sponsorships from local businesses or friends and family.

Khari and Nico are Faustin, Mississippi natives who later went on to reside in Oxford for a few years. Although the couple now reside in Florida, they still have a connection to the community and are calling on local help from a place they used to call home.

Their daughter Ziili Turner has already competed in the Florida-Georgia Our Little Miss state preliminary where she won each program in her division including People’s Choice, Prettiest eyes, Most Photogenic, and Best Fashion. She was announced preliminary Queen and was advanced to the state competition.

“I had no idea she would even win the preliminaries,” said Khari. “It was really last minute for us and we really didn’t know what to expect but we didn’t expect her to go this far in the competition.”

In addition, she won the most anticipated award in the competition which was The People’s Choice Award out of competition across all age divisions from infants to 28 year olds in the entire state of Florida and Georgia. Now, Ziili will advance to the World Miss Universal Beauty where she will compete in Texas January 13 to January 17.

“That was a major achievement and we’re super excited about that,” said Khari.

The Turners disclosed that these accomplishments were even more amazing as Ziili was discovered with two holes and an open valve in her heart. Understandably, her parents were going to step down from the competition

“We didn’t want to stress her out and we thought it would be overexerting her heart,” said Khari. “It kind of put a damper on us as far as competing, because she was happy and we thought, ‘Healthy baby.’”

However Ziili’s doctor actually encouraged her to compete in the pageants saying the more active Ziili is, the better off she would be.

“She’s actually done really good and is really good with the crowd,” Khari continued. “Her heart is doing better and she’s seeing a doctor regularly.”

She said Ziili is a strong baby and is ready to take on even more with her parents at her side.

To those who would like to donate or sponsor Ziili Turner, contact Khari and Nico Turner at 904-947-4358 or at kharikitchen@gmail.com.

US faces a double coronavirus surge as omicron advances