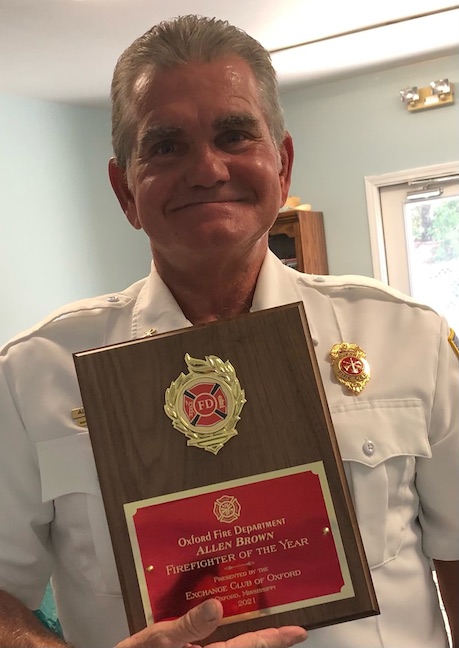 Oxford Fire Battalion Chief Allen Brown was awarded 2021 Firefighter of the Year by fellow co-workers to honor his 24 years of service and role as a leader in the organization. (Photo: Allen Brown/Oxford Fire Department)

“It was really an honor to get the award,” said Brown.

Each year, OFD employees nominate whoever they feel suits the honor best and this year Brown was chosen by his co-workers in recognition of his 24 years of dedicated service and role as a leader, mentor and friend.

According to Brown, this career was not what he had in mind as an University of Mississippi undergraduate business student. He dreamed of starting his own business, but after turning that dream into reality, Brown quickly realized it was tough to find reliable help.

“Good help will make or break you,” he said. “I was sort of beating my head against the wall to try to keep things going.”

He continued to operate his own business, work as plant manager at a nearby corporation and service the community as a volunteer firefighter.

When the corporation was sold and Brown was looking for other career opportunities, he took a suggestion from a friend and signed up to be a career firefighter. It took convincing for him to apply initially, but once Brown committed, he was determined to do his best and rise through the ranks.

“I kind of always had a good work ethic,” he said. “I’ve always set a goal for myself from the beginning no matter what I was doing. When I came into the fire service, I had a goal: I wanted to be promoted to lieutenant in five years, I want to be captain in ten years and I wanted to be a battalion chief in 15 years. That’s basically what happened.”

The battalion chief worked hard for many things, but he truly did not expect to win Firefighter of the Year. When asked why he thought he was nominated, Brown said it was his constant support for his fellow firefighters from the bottom ranks on up and remaining as fair to everyone as possible that granted him the nominations and his eventual win.

“I’ve always lended them a hand, helped them with promotions and tried to teach them as much as I can,” he said. “I’ve been very fair and I think that goes a long way, especially in management.”

Every shift day, there are 21 people who have to answer to and take instruction from Brown, which motivates him to be the best leader possible and do his best by his subordinates.

“One thing that makes a good leader is being able to lend ear, to listen to people and to understand where they’re coming from,” said Brown. “Not just to have one view and bark out orders, but to understand and accommodate them.”

When a community relies on you, especially during their darkest moments, firefighters have the responsibility to give their best, said Brown.

“My motivation is to help the public and try to make sure everything runs smoothly for the public,” he said. “We’re there for the public, so we always need to be ready to go and excited about what we do.”

Firefighting is an intense profession, but OFD is able to create a familial bond by overcoming challenges, personal and professional, and trying to understand one another. More than any other job, teamwork and trust is key to their success.

“I’ve always been able to listen to my guys and ask their opinions on things, use their opinions and put it into play because this is their department,” Brown said. “It’s not my department so I try to get their input on every decision.”

Brown is reaching 25 years of service to the OFD and that would be a nice capper to a great career, but he’s not looking to stop just yet.

“It’s been a really good profession,” said Brown. “I could retire next year, but I’m not going to. I feel like as long as I’m healthy and I got the job that I always wanted, why would I retire?”

Looking back on the many years he’s served, Brown can confidently say he’s given his very best to OFD and to the community.

“I’ve just really enjoyed it,” he said. “I think I’ve given 110% to my career. Not everyone makes it to battalion chief and this is as far as I want to go.”