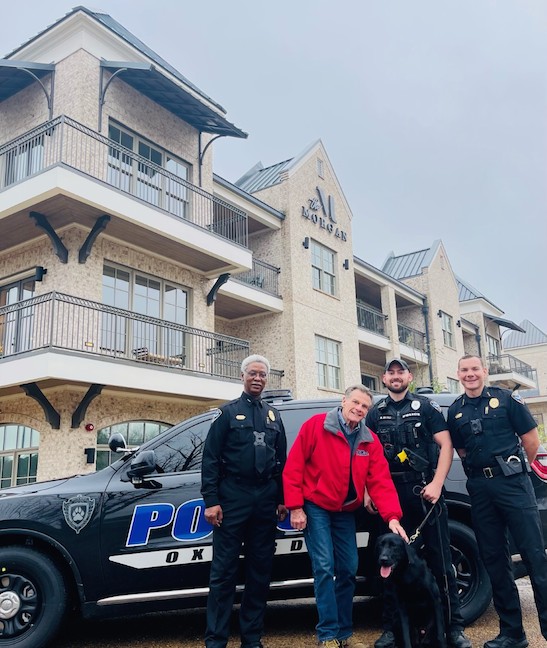 According to OPD Lieutenant Hildon Sessums, Jocko comes at no cost to the taxpayers of Oxford.

Oxford businessman, Johnny Morgan, donated the money to the Oxford Police Department to be used towards a special project and OPD Chief Jeff McCutchen ultimately went with a new K-9 for the department.

“Mr. Morgan went above and beyond for the Oxford Police Department,” said McCutchen. “His generosity will help with the mission of OPD for years to come. We thank Mr. Morgan for his support of  law enforcement and commitment to help us keep Oxford safe.”

The chief also requested that officers Will Hollowell, Canaan Pearson and Byrd be considered as contract agents for the Mississippi Bureau of Narcotics. This request was approved through the Oxford Board of Aldermen on a Tuesday afternoon meeting.

“There K-9 officers have a good working relationship with the agents of the Oxford District of MBN,” read McCutchen’s letter to Captain John Butts of MBN. “I feel that this will further enhance the working relationship and our mutual cooperation in proactively reducing the drug problem in and around our community.”

McCutchen reported that MBN does not have any K-9s on their team and the OPD’s K-9 unit would allow them to assist MBN if they had a need for Oxford’s resources.

Along with purchasing the canine, the donation also covered the cost of a new Dodge Durango, all the equipment inside the K-9 patrol vehicle, the training costs associated with getting the handler trained, a DJI drone, and a handheld thermography camera.

The community will be able to meet Jocko at upcoming community events and demonstrations.