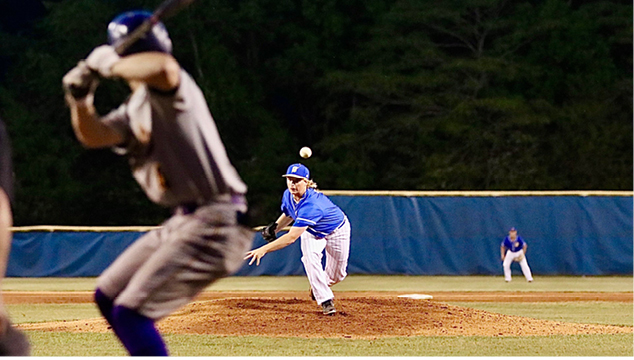 The sophomore lefty made brief appearances against Brandon, East Union and Tishomingo County early in the year before suffering a shoulder injury that sidelined him for most of the regular season.

He made his return to the mound in game one of the Chargers’ MHSAA Class 6A North Half championship series against powerhouse DeSoto Central on Saturday as he was thrown into the fire in Oxford’s biggest game of the season to date.

The young lefty was up to the task, tossing three scoreless innings to keep Oxford within striking distance after falling behind early.

Hill allowed just one baserunner across three innings, surrendering a two-out single in the top of the seventh before forcing a groundout to second to end the inning.

He worked quickly and efficiently, throwing just 32 pitches in 10 at-bats as he forced soft contact in the first few pitches to each batter.

“He had all three pitches and he competed,” head coach Cade Hoggard said. “He’s been hurt—he had a little shoulder injury in the middle of the season but rehabbed it, came back and has thrown maybe two or three bullpen [sessions]. He’s looked really good down there working with him and it was one of those tonight where we’re trying to get somebody out there to save some arms and he competed.”

Hill said he surprised when he got the call to go to the bullpen, adding that he did not anticipate pitching in such a big matchup after not throwing in a game since Mar. 17.

“One in a million… I had no idea,” he said when asked what he thought his chances to throw were coming into the game. “I couldn’t throw a strike in the bullpen but then my bullpen catcher, Rowan Gordon, calmed me down a little bit and then Campbell Smithwick got hurt so we were warming up together and he told me ‘just throw strikes, they can’t hit you,’ and that settled me down a bit.”

The sophomore put together his best outing of the season when the team needed it most, but the offense was unable to bridge the gap in game one as they fell 6-3 to the Jaguars.

The Chargers travel to Southaven for game two on Monday with their backs against the wall, desperate to force a decisive game three here in Oxford on Tuesday. First pitch is currently scheduled for 7 p.m. at DeSoto Central High School.

Oxford falls to DeSoto Central in game one of…