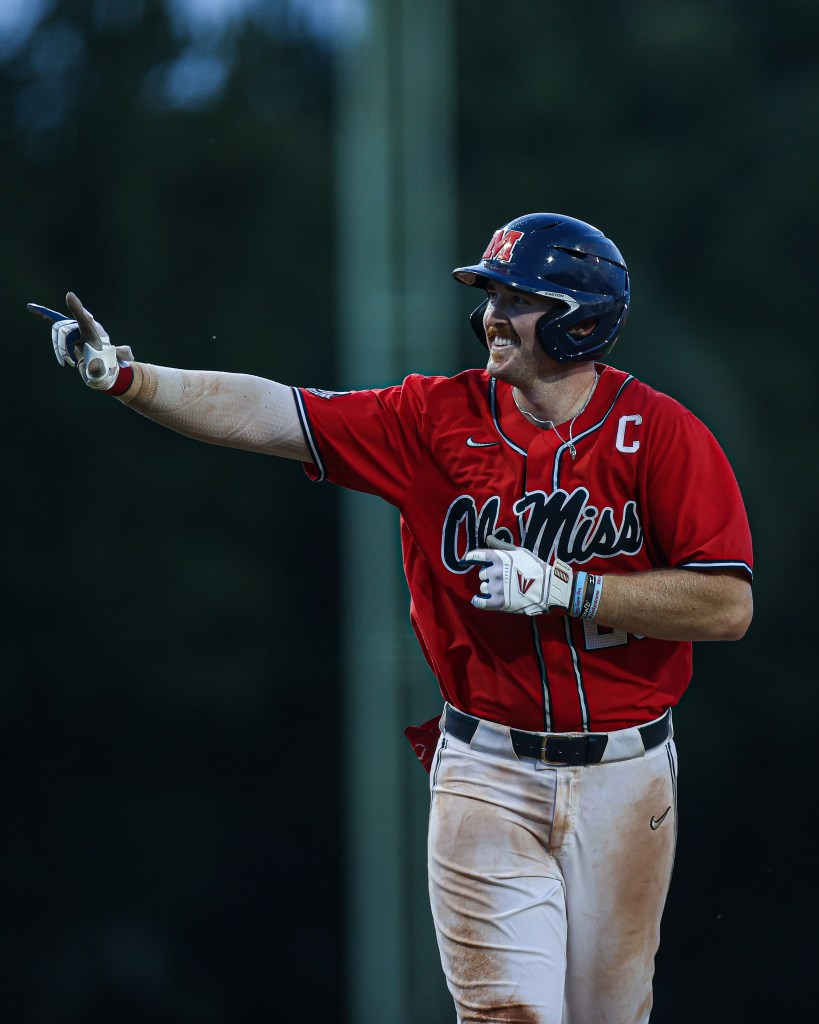 Ole Miss first baseman Tim Elko gestures to the dugout after hitting his third home run of the game in the seventh inning of the Rebels' 22-6 win over Arizona in the Coral Gables (Fla.) regional final on Monday, June 6, 2022. (Josh McCoy/Ole Miss Athletics)

The legend of Tim Elko continues to grow.

The Ole Miss first baseman endeared himself to Rebel fans last season when he bounced back from a torn ACL suffered in early April to lead Ole Miss to the seventh Super Regional appearance in program history.

He continued to affirm his status as a cult hero in Oxford this weekend, when he hit .778 in three games at the Coral Gables (Fla.) regional to send the Rebels to their third consecutive Super Regional.

The Ole Miss captain was dominant throughout the weekend, posting an .857 on-base percentage and an astonishing 2.111 slugging percentage en route to Regional MVP honors.

He capped off the weekend with perhaps his best performance in a Rebel uniform to date, becoming the third player in program history to hit three home runs in a postseason game in a 4-for-4 performance at the plate.

His third long ball of the afternoon marked another major milestone as he passed Jason Huisman and Brian Pettway for sole possession of the program’s single-season home runs record.

Elko’s five-RBI performance also moved him into a tie for third place in the Rebels’ single-season RBI leaderboard. He is now just one RBI away from cracking the top 10 in the program’s career list.

Ole Miss looked dead in the water just a few weeks ago, but reached the tournament as the last team selected in this year’s field of 64 and now sits just two wins away from a trip to Omaha.

The Rebels head to Hattiesburg this weekend to take on Southern Miss as they try to reach the College World Series for the first time since 2014.