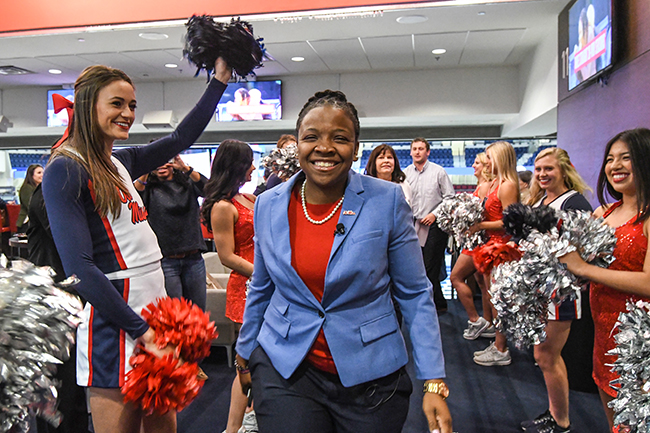 Yolett McPhee-McCuin is introduced to fans as the new Ole Miss women's basketball coach, at the Pavilion at Ole Miss, in Oxford, Miss. on Friday, April 6, 2018. (Bruce Newman, Oxford Eagle via AP)

NASSAU, Bahamas – Following a historic season of  leading Ole Miss to its first NCAA Tournament appearance in 15 years, head coach Yolett McPhee-McCuin continues to write history of her own with the Freeport, Bahamas, native returning home to serve as an assistant coach for the Bahamas Senior Men’s National Team during World Cup qualifiers.

McPhee-McCuin joins forces with Golden State Warriors assistant coach Chris DeMarco, as the Bahamas vies to qualify for the 2023 FIBA Basketball World Cup next summer in the Philippines, Japan and Indonesia. As the first woman to ever coach with the men’s senior national team in the Bahamas, McPhee-McCuin looks to assist the team reach its first World Cup appearance in the nation’s history.

“I have been following Coach Yo’s career extensively and I am excited to have her join us. Her knowledge and depth of experience as a veteran head coach will be an incredible asset for us as we compete for to qualify for the World Games,” said DeMarco. “We are excited that she accepted the role and look forward to having her with us during this pivotal time.”

A mini training camp is set to take place June 25 through 30 in Miami, before competition in the Americans qualifiers in Window 3 begins July 1 against the US Virgin Islands in St. Thomas at 6 p.m. CT. The squad then heads to Nassau to take on the Dominican Republic in its final game on July 4 at 6 p.m.

The top three teams from each group for a total of 12 in the Americas qualifiers move forward to the second round taking place in August, November and February. The top seven teams following the second round reach the World Cup next August.

McPhee-McCuin is familiar with competition on the world stage, serving as the head coach for the Bahamas Senior Women’s National team from 2014 through 2017. Under her tutelage, the Bahamas won the 2015 CBC Basketball Championship for women, as the best national team in the Caribbean.

“I am incredibly humbled and grateful to represent the Bahamas as a coach for the Men’s Senior National team in International play,” said McPhee-McCuin. “Any time that you have the opportunity to represent ‘home’ it’s a blessing and I’m looking forward to help our team compete in the World Cup Qualifiers.”