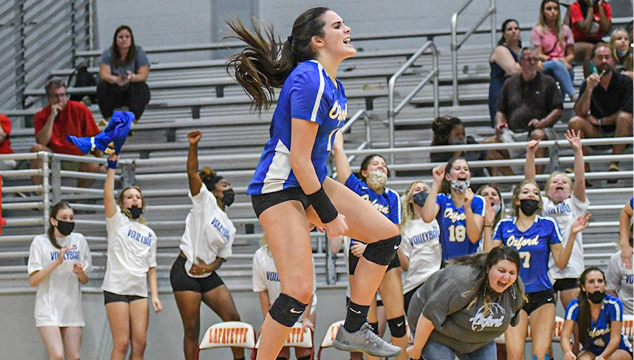 Oxford volleyball was a set away from the third state title in school history last season, and the Lady Chargers are eager to get back on the court in 2022 as they attempt to make it back to Jackson for the second straight season.

Oxford fell 3-2 to Brandon in the state championship match last year—the final game in a Charger uniform for a pair of program legends in Ainsley Tacke and Catherine Bianco.

Bianco set the school record for career assists during her tenure in the blue and gold, while Tacke racked up kills and finished second in the state in kill percentage as a senior in 2021.

The Lady Chargers will attempt to fill the void left by their two stars with a mixture of young talent and veteran experience.

Sophomore Claire Wicker will step into the starting setter role for Oxford after getting plenty of varsity experience as a defensive specialist last season.

“She played a lot of varsity for us last year in a DS role,” Martin said. “I thought it was important for her to go ahead and get a lot of varsity touches for us. She did really well in that role coming as a freshman and was immediately able to have an impact on our team.”

Senior Bree Lyons will also be asked to step into a larger role on the team as she becomes the primary outside hitter and will be asked to shoulder the majority of the attacking duties.

She finished second on the team in kills last season with 182, and is now primed for an even more productive season following the departure of Tacke.

“She’s worked a lot on her leadership, along with all of our seniors— we have five seniors—and they all are really pushing leadership and accountability,” Martin said of Lyons. “We have had a really good summer, just overall as a team and becoming a team, with the leadership, with just getting better in general. I’m excited to see all the pieces come together.”

Another key piece for Oxford in 2022 will be Torrey Tkach, who became the first volleyball player in Oxford history to commit to a Division I school out of high school when she announced her intentions to continue her academic and athletic career at Southern Miss back in June.

The 6-foot-3 middle blocker registered 132 kills and 55 blocks last season, and may be the catalyst for Oxford this year as they  attempt to secure their third North Half championship in the past seven seasons.

The Lady Chargers will have a target on their backs after a dominant run through the North Half playoffs last October, but Martin said her team is eager to take on the challenge and attempt to replicate that success.

“They’re very much embracing it.” she said. “There’s no reason we shouldn’t be able to compete again and get where we were last year. Obviously losing two really good players, you have to replace those players, but fighting hard, working hard, you know, you always want to go back to where you were. Your goal is always to play for a state championship.”

Oxford faces Pontotoc at home in a preseason jamboree game at 6 p.m. on Saturday before kicking off their regular season against Lafayette on August 5.