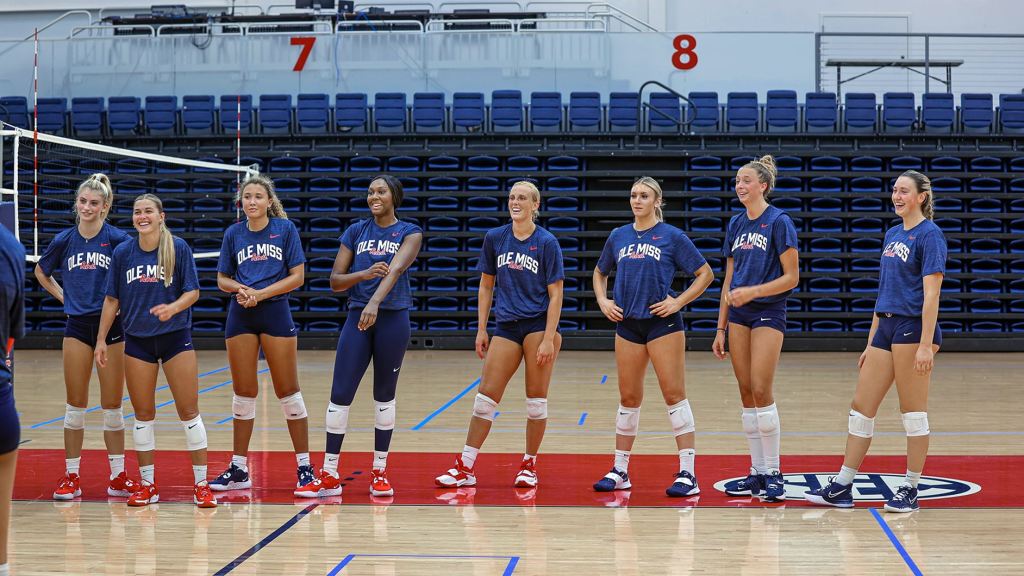 Less than two weeks from the start of the 2022 season, Ole Miss volleyball reconvened as a team and wrapped up its first official week of fall camp on Saturday.

Just one week into the swing of things, head coach Kayla Banwarth has been impressed with her squad that features 12 returners from last season’s NCAA Tournament team and eight newcomers.

“It’s great to be back,” said Banwarth. “The vibes in the gym are really, really good. This is a fun group to be around and to train with …  they enjoy working hard and they enjoy the grind. It’s been a really good first few days, and I’m excited about the direction we’re heading in.”

Of those returning is Preseason All-SEC middle blocker Sasha Ratliff, 2021 AVCA Honorable Mention All-Region outside hitter Anna Bair and a pair of juniors in Payton Brgoch and Samantha Schnitta, who are coming off breakout seasons. The mix of veteran leadership and youth have the Rebels in a position to continue last season’s winning ways.

Also looking to factor into the mix this year is an impressive signing class that features five AVCA High School All-Americans, tied for the most in the nation, and a pair of impact transfers in middle blocker Meauna Booth and setter Sommer Daniel.

“I think our freshmen are already making plays that fifth year seniors around the country are trying to make, so they’re doing an amazing job for having been thrown into their first collegiate fall camp,” Banwarth stated. “I’m really proud of them … Top to bottom we have a lot of girls stepping up to the plate and a lot of girls ready to compete this year.”

This season, Banwarth hopes to have the Rebels battle tested. Their schedule features 10 matches against NCAA Tournament teams from last year, including Georgia Tech, Nebraska and Kentucky.

“We have a really tough non-conference slate coming up, so we have to be able to compete right away and see what we can do against some of the top teams in the country.”

As for the team’s 2022 goals, Banwarth made it clear that they want to repeat and build on last season’s successes and take the program to new heights.

“Our goal is to keep making history,” said Banwarth. “We made history last year with one of the best seasons in school history and we want to make history this year by making some waves in the NCAA Tournament and getting more towards the top of the SEC.”

The Rebels will continue to train and mesh together over the next two weeks as they gear up for the start of the season. Fans will have two chances to catch Ole Miss in action this preseason, with the annual Red vs. Blue scrimmage on Wednesday, August 17, at 1 p.m. CT and an exhibition against Lipscomb on Saturday, August 20, at 1 p.m. Both events are free and open to the public at the Gillom Center.

First serve of the 2022 season officially takes place on August 26 at 4 p.m. as the Rebels open the Ole Miss Invitational, hosting Georgia Tech. The match will be available to stream on SECN+.