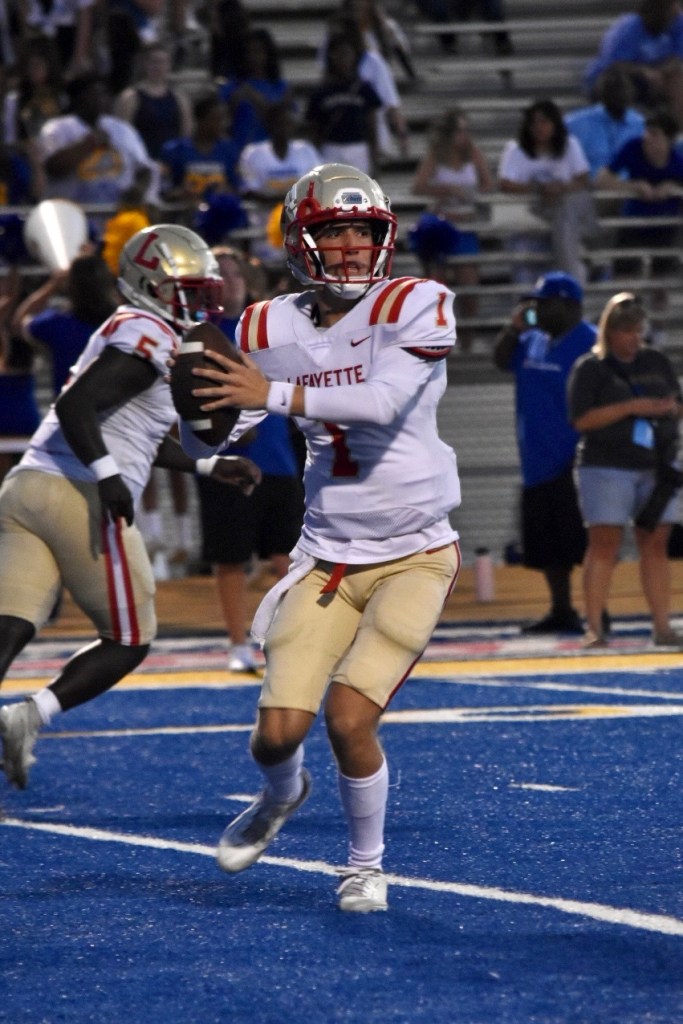 TUPELO, Miss. — Lafayette football struggled to get anything going on Friday as they fell 34-0 to an experienced Tupelo squad in their regular season opener.

The Commodores struggled to move the ball in the first half against an experienced Tupelo defense—going three-and-out on their first three possessions and crossing into enemy territory just once.

Junior quarterback Charlie Fair started the night off strong, but quickly got into trouble when he began forcing passes downfield into coverage.

“You know, we got to the point where we said ‘if we’re gonna get back in it we’re gonna have to take some shots’ and if you do that against a real aggressive defense like they’ve got it’s not always gonna look good,” said head coach Michael Fair. “He’s got to do a better job of protecting the ball… but our offense is going to be fine. I think it’s just a work in progress.”

The Commodores did manage to find some success in the running game late in the first half however as senior running back Jay Reed used his patented blend of patience and physicality to jump-start the offense.

Their late first-half success did not translate to the second half however as the Golden Wave settled back in and held the Commodores to just 64 yards between the third and fourth quarters.

“They’re just real active. We’re so young up front that getting a test early like this—we knew it was going to be tough,” Fair said. “We’ve got to fix some things but I think we have the right people, we just have to put some things together.”

Lafayette struggled on the defensive end as well as they failed to contain a Tupelo offense that was bigger, faster and stronger at every position.

The Golden Wave’s junior signal-caller took advantage of his plentiful time in the pocket—completing 11 of 11 passes for 168 yards and two touchdowns in the first half alone.

“I mean he’s just a great player,” said Fair. “We knew that going in—he showed last week in their Jamboree that he was much improved from last year and we were able to see that up close and live tonight. He’s the real deal.”

Harrell continued to dominate in the second half—finishing the game with 290 yards and 4 touchdowns on 24 of 26 passing.

The Golden Wave’s running backs also broke loose in the second half as juniors Qua Middlebrooks and Jaboree Dooley combined for 124 yards on 25 carries to help push the lead out to 24-0 late in the third quarter.

Lafayette had no answer for the Golden Wave as they continued to run up the score in the second half—losing 34-0 to fall to 0-1 on the season.

The Commodores will be back in action again next week as they host Horn Lake at 7:30 p.m. in their home opener.