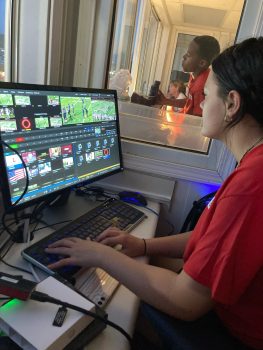 Already a staple at the school’s sporting events, the student-led program is rapidly expanding from a run-of-the-mill student newspaper to an all-encompassing media outlet that produces photos, videos, stories and podcasts on a variety of topics.

The program, which is run by student media advisor Loidha Bautista, was founded in 2017 with the goal of consolidating the school’s separate media entities into one.

“We had two publications and at that point is when I thought, ‘if we could just pull everything together and work as a team,'” Bautista said. “Then I would say about five years ago we started saying ‘we’re gonna do this as concise as possible as a group’ and that’s where Commodore Media Group really came about.”

Bautista started by combining the school’s yearbook and newspaper programs together, but quickly branched out to include more multimedia projects with the help of three key students.

“It really came about through the work of three girls, Julie Lee, Nasia Thompson and Aubrey Norris. Normally I share students with sports, and 500 different clubs and everything but these girls ate it up, this is what they wanted to do,” Bautista said. “I said ‘if you believe in this and this is what you want to do then we could take this to the next level’ and that’s how we became so visible.”

The trio fully committed themselves to creating an all-encompassing student media entity—sending student photographers to cover the school’s sporting events and even adding a broadcast team that produces news segments for social media.

Thompson, now a sophomore Integrated Marketing and Communications major at the University of Mississippi, said her work with CMG sparked her interest in journalism and led her to where she is today.

“Commodore Media Group is the reason I’m in the major I’m in today,” she said. “I don’t think I would have ever realized that graphic design and photography is something that I would enjoy without Bautista and that environment. Everything I’m doing now has taken off from getting into that program in high school in 2017.”

Thompson added that the program would not have the same impact on students without the presence of Bautista, who she credits with getting her out of her shell and giving her the tools to succeed.

“When I got into the program it was very overwhelming,” Thompson said. “Everybody knew each other and I was kind of a standout because I was the only black girl the first year… but Bautista made it very comfortable. I think [my experience] would have been very different without Bautista because she’s been doing it for so long and she’s so passionate about it.”

CMG has already made a significant impact on the Lafayette community, and Bautista says they are not done expanding operations either.

The program added a podcast last year, and will include commentary and play-by-play on live sports broadcasts for the first time this year.

They also introduced a fully student-run sports production team this year that is charged with running Friday night game-day operations for football games.

“It’s just blown up in the last two years,” Bautista said. “The visibility is up, the interest is high… it’s a beautiful thing to see because it’s student work but it’s good work that they’re doing and it’s worth it to the other students on campus.”