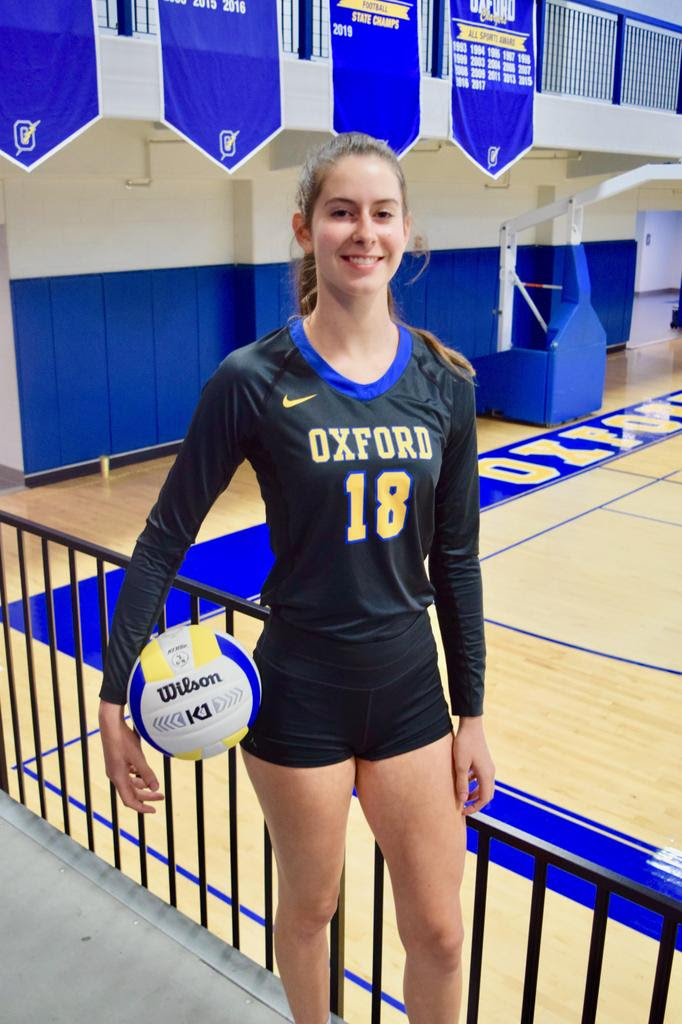 Torrey Tkach is the first in Oxford's history to receive a full Division 1 scholarship for volleyball. (Photo: OSD)

Torrey Tkach, Oxford Charger Volleyball Team Captain, was told two years ago that she had a rare form of cancer that could prevent her from playing volleyball. Tkach is now in her senior year at Oxford High School and has committed to play NCAA Division I volleyball at the University of Southern Mississippi (USM). Tkach is the first in Oxford’s history to receive a full Division 1 scholarship for volleyball.

During the summer prior to 10th grade, Tkach began experiencing back pain and numbness in her leg at volleyball practice.

“I just thought I needed to do more strength training and stretch more, so I went to physical therapy,” Tkach said.

After seeing Dr. Field, a local Orthopedic Surgeon, she was referred for an MRI where a tumor was found on her spinal cord. The tumor was an Ependymoma, a central nervous system tumor that is most often found in children.

In September of her 10th-grade year, she underwent surgery to remove the tumor at the peak of the Charger volleyball season. Tkach, the 6-foot 2-inch middle hitter, missed the entirety of her 10th-grade season.

“I knew I would have to work harder than anyone else to get back on the court. It gave me a purpose and motivation in the gym. I wanted to prove to everyone that I could do it. If I hadn’t had this experience, I don’t think I would be as strong as I am now,” said Tkach.

Now at the two-year anniversary of her cancer, Tkach is looking forward to achieving her goal of playing collegiate volleyball.

“Her resilience to overcome the setback of cancer is what makes her a champion. She has worked so hard for all she has accomplished,” said Charger Volleyball Coach, Ashley Martin.

Tkach helped the Oxford Chargers win the north-half state championship in 2021. Currently, the Chargers are undefeated in their district and hoping for their second-year chance at a state title.