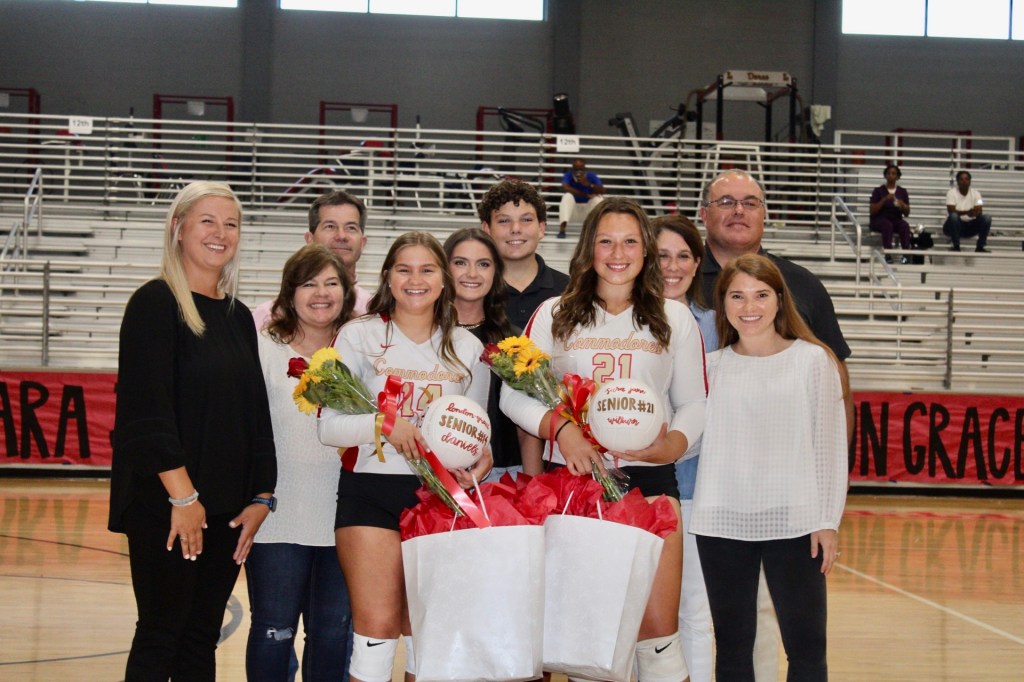 Lafayette's London Grace Daniels (14) and Sara Jane Wilburn (21) pose for a photo with their coaches and family during the Commodores' Senior Night Celebration prior to their win over Amory on Thursday. (Ava May/CMG)

The Lady Commodores dominated throughout the match—using their staunch defense to stymie the Panthers at every turn.

Lafayette cruised to a 25-16 victory in the opening set before running into trouble in the second set as they fell behind 10-7 before claiming nine of the next 10 points to take a 16-11 lead.

Amory attempted to mount a late rally, but back-to-back points for the Lady ‘Dores closed out the set and put the Panthers’ backs against the wall.

Lafayette closed out the match with another 25-16 victory in set three that secured the sweep as they improved to 12-7 with just two weeks remaining in the regular season.

The night also marked a special occasion for the ‘Dores as they honored Sara Jane Wilburn and London Grace Daniels with a pregame Senior Night ceremony.

“We have some really good leadership this year with our upperclassmen,” Elliott said. “They both do a really good job of talking the talk and also walking the walk so they’re never gonna say a negative word to another teammate, they’re always going to hustle after every ball… I hope that, moving forward, all of our underclassmen see that and know that is the expectation for years to come.”

The Lady Commodores move on to face off with Regents at home on Tuesday before hosting Lake Cormorant in their final district game of the season on Thursday.