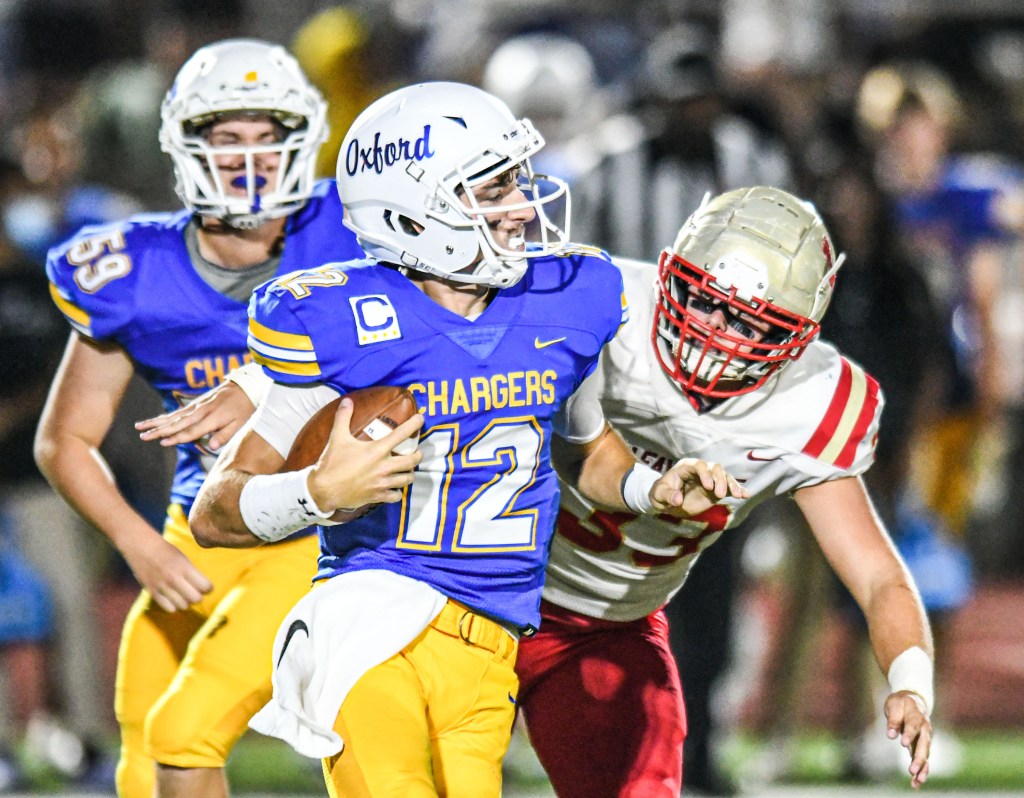 JACKSON, Miss. — Oxford football secured their first region win of the season on Friday as they dominated Murrah 43-8 on the road to improve to 3-1 on the season.

The Chargers controlled the action on both sides of the ball all night against a Mustangs squad that looked outmatched from the first snap of the game.

“I thought we played with a lot of effort and a lot of intensity,” said head coach Chris Cutcliffe. “We challenged our guys to come out and start fast in all three phases and I thought we did a good job of that for sure.”

Oxford nearly scored on their opening drive, but a fumble in the red zone left them scoreless after driving all the way to the five yard line.

The miscue proved moot however as the Chargers forced a three-and-out on the next possession before running back Roman Gregory punched in the first touchdown of the night on a three-yard touchdown rush.

Quarterback Mack Howard followed that up with a score of his own just a few minutes later as he connected with receiver Xavier Lewis on a 30-yard touchdown pass that extended the lead to 15-0.

The highlight of the night came midway through the second quarter however when senior running back Jaidyn Young found a gap and exploded for a 16-yard touchdown rush—his first career varsity touchdown.

“It’s overwhelming. Finally—after four years it feels good to get in there. It feels real good,” Young said.

The senior made the most of his touches in the game—slicing through the Mustangs defense time and time again as he heard his number called more and more as the Chargers steadily pulled away.

“I was really proud of him—you know, getting into the end zone for his first ever touchdown,” Cutcliffe said of Young’s performance. “He’s gotten some great carries for us throughout the course of the year but it was great to see him get as much work as he did tonight and play really well.”

Junior safety Ken Herron also had a career night for the Chargers—recording two interceptions in the first half as he got the better of Murrah’s Justyce Williams time and time again.

“I’ve been waiting for these two picks for the longest time,” Herron said. “Ryan Kirkwood over here helped me out a lot and really motivated me to put on a show tonight.”

Oxford continued to pile it on in the second quarter as they exploded for 21 points in the period to open up a 29-0 lead at the half.

They nearly triggered the second-half running clock before the break, but a 38-yard touchdown pass from Howard to Lewis was wiped off the board after officials ruled that Howard was beyond the line of scrimmage on the throw.

“We had a little stretch in the first half where we did have a lot of penalties and it’s definitely something we’ll have to look at on film and clean up moving forward,” Cutcliffe said.

The Chargers added two more scores in the second half to open up a 43-0 lead before Murrah scored a late touchdown to avoid the shutout.

The win marked the first region victory of the year for Oxford, who faces a tough test on the road next week against a Tupelo squad that entered the week at No. 6 in the state.

The Chargers will take on the Golden Wave at 7:30 p.m. on Friday at Renasant Field in Tupelo.