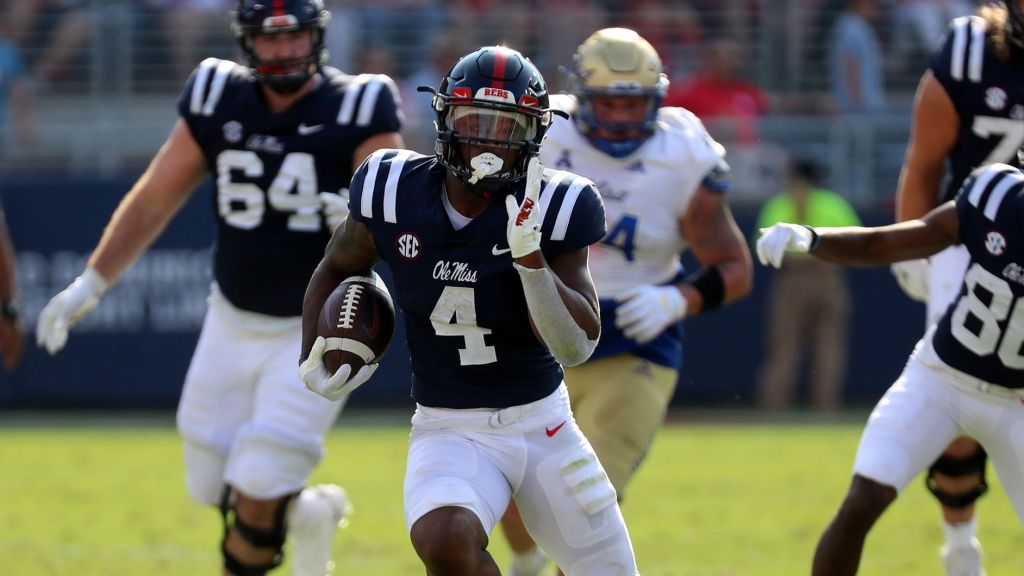 BIRMINGHAM, Ala. – Ole Miss football freshman running back Quinshon Judkins has wasted little time establishing himself as a premier ball carrier at the collegiate level, and the Southeastern Conference has taken notice, naming Judkins the Co-Freshman of the Week on Monday.

This comes as the first career SEC weekly honor for Judkins, who becomes the second Rebel to earn a weekly honor from the league office this year, joining Nick Broeker, who was named Offensive Lineman of the Week last week.

In Saturday’s win over Tulsa, Judkins broke out for a career-best 140 rushing yards on 27 carries—also a career-high—and found the end zone twice for the second consecutive game. The freshman out of Pike Road, Alabama, has 100-plus all-purpose yards in three of four games in his collegiate career.

In the effort, Judkins moved to the top of the SEC rushing touchdown chart with five now on the season. His effort helped Ole Miss amass 308 yards on the ground, its second straight output of more than 300 rushing yards.

Judkins now leads Ole Miss with 429 rushing yards on 70 carries through four games. He is the leading producer in a rushing offense that ranks No. 1 in the SEC and No. 4 nationally.

Judkins and the Rebels return to action Saturday, Oct. 1, to host No. 7 Kentucky for the Stripe the Vaught game at Vaught-Hemingway Stadium. Kickoff is set for 11 a.m. CT on ESPN. SEC Nation will also be in The Grove as part of a jam-packed homecoming weekend in Oxford.