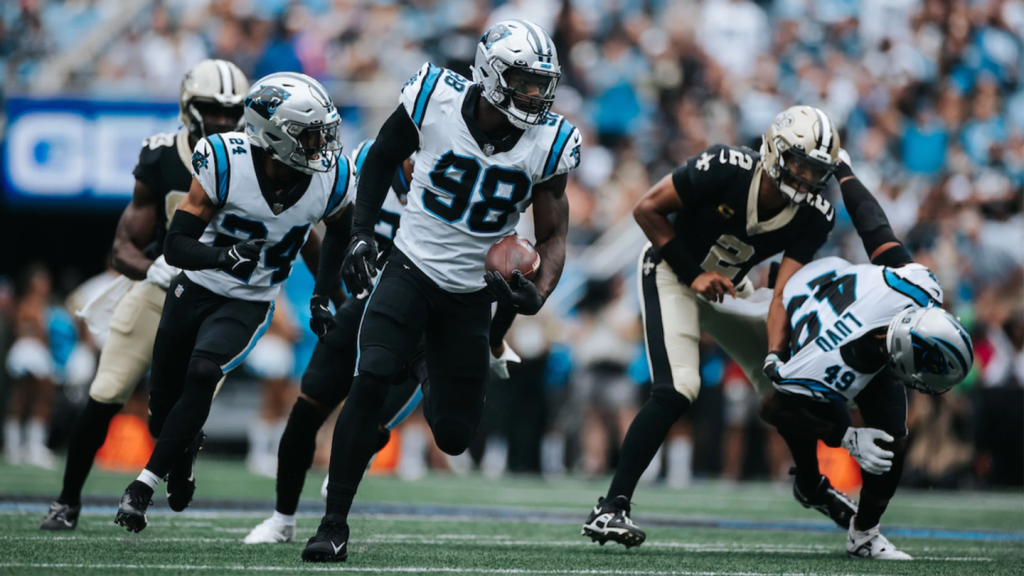 Carolina Panthers defensive end Marquis Haynes was one of 17 former Ole Miss players in action during the NFL's week three this past weekend. (Ole Miss Athletics)

Here at Ole Miss, we are proud to update Rebel fans on the status of our former players who lace up their cleats on Sundays in the NFL. The Ole Miss football program continues to shine in the professional league with 29 former Rebels on NFL rosters (practice squads included), including star wideouts A.J. Brown, D.K. Metcalf and Elijah Moore.

The NFL Rebels made their presence known this week as A.J. Brown, Marquis Haynes, and D.K. Metcalf all picked up touchdowns for their respective teams. Overall, 17 former Rebels played in the third week of the 2022 season. Here’s a rundown on how each performed:

#11 A.J. Brown | WR | Philadelphia Eagles
Completed five receptions to gain 85 yards and a touchdown to contribute to the Eagles’ 3-0 start to the season. Hauled in a deep left pass from Jalen Hurts for 38 yards, the second longest play of the game.

#24 Snoop Conner | RB | Jacksonville Jaguars
Was listed as inactive in the Week 3 matchup with the Los Angeles Chargers.

#17 Evan Engram | TE | Jacksonville Jaguars
Caught one pass for a gain of nine yards and succeeded in a two-point conversion attempt.

#38 Myles Hartsfield | DB | Carolina Panthers
Brought down three solo tackles on 37 defensive snaps to contribute to the Panthers win against the Saints.

#98 Marquis Haynes | DE | Carolina Panthers
Picked up and returned a Saints fumble 44 yards for his first NFL career touchdown. Additionally, recorded two tackles and a quarterback hit to help give the Panthers their first victory of the season defeating the Saints 22-17.

#21 Mike Hilton | CB | Cincinnati Bengals
Brought down eight total tackles with five of them being solo and caused a loss of three yards for the Jets’ offense to give the Bengals their first win of the season.

#31 Jaylon Jones | CB | Chicago Bears
Tallied two tackles at defensive back to attribute to the Bears 23-20 win over the Texans.

#75 Greg Little | OT | Miami Dolphins
Lined up on 38 offensive snaps and three special teams snaps to lead the Dolphins to a 21-19 victory over the Bills.

#14 D.K. Metcalf | WR | Seattle Seahawks
Brought down five passes for a gain of 64 yards. Completed an 18-yard pass to gain his first touchdown of the 2022 season.

#70 Royce Newman | OL | Green Bay Packers
Started at right guard, competing in all 62 offensive snaps to lead the Packers to a 14-12 win over the Buccaneers.

#93 Mark Robinson | LB | Pittsburgh Steelers
Was listed as inactive in the Week 3 matchup with the Browns.

#54 Sam Williams | DE | Dallas Cowboys
Earned two solo tackles while allowing zero sacks to give the Cowboys a win against the Giants.