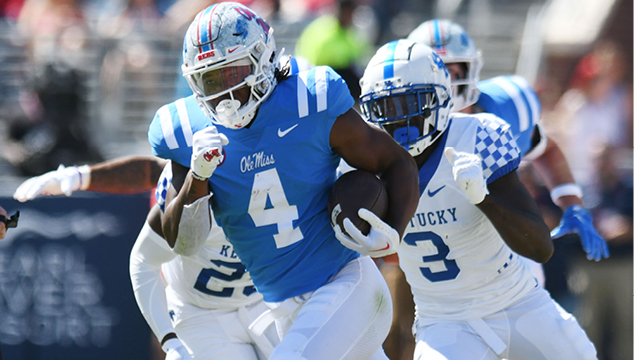 Ole Miss Rebels running back Quinshon Judkins (4) runs for a touchdown against Kentucky Wildcats at Vaught-Hemingway Stadium in Oxford on Saturday. (©Bruce Newman)

As Jared Ivey came around the edge he saw the football right in front of his face.

He knew his team needed him to make a play as No. 7 Kentucky drove into the red zone in the final minute of a three-point game with a chance to tie or score the go-ahead touchdown.

The junior Georgia Tech transfer did just that—stripping the ball from quarterback Will Levis before fellow defensive end Tavius Robinson pounced on it to give Ole Miss the ball back with just 55 seconds on the clock.

“I had an edge rush and a tight end on the line. I didn’t know if he would chip or just release right away but I came off, he chipped pretty hard—I kind of stumbled a little bit but got my footing together and worked the move outside. I just tried to bend the corner and reached out and the ball was right there. He basically put it right in my hand,” Ivey said.

The play capped off a terrific afternoon for the Rebels as they fended off a late comeback attempt to secure a 22-19 victory over the Wildcats in their first SEC game of the season.

Ole Miss (5-0, 1-0 SEC) played well on the defensive side of the ball all afternoon—holding the Wildcats high-powered offense to to just 328 total yards as their offense

They lived in the opposing backfield all afternoon—recording three sacks and nine tackles for loss while holding the Wildcats to 108 yards on the ground.

Central Michigan transfer Troy Brown was particularly disruptive for the Rebels—racking up nine tackles, a pass deflection, half a sack and one tackle for loss.

“They played really hard and we did not—because of their pace of play—rotate many guys today so a lot of them played the whole game for the most part… It was a big time defensive day,” said head coach Lane Kiffin.

The Rebels also played well on the offensive side of the ball as freshman running back Quinshon Judkins exploded for his third 100-yard performance in the last four games while quarterback Jaxson Dart eclipsed 200 yards through the air for just the second time this season.

The sophomore USC transfer looked more comfortable than he ever has—staying poised in the pocket and making quality throws downfield against one of the top defensive units in the conference.

“I thought Jaxson played really well,” Kiffin said. “[He made] a really poor decision on the interception… and we had a power read where he pulled it when we could’ve scored on the other side… but other than that I thought he played really well, really poised—it didn’t seem like he was rattled at all.”

Dart finished the game with a season-high 213 yards on 15-for-29 passing. Almost half of those yards went to Mississippi State transfer Malik Heath, who recorded six receptions for 100 yards as he became the second Rebel receiver to reach the 100-yard mark this season.

“It’s just the play calling,” Heath said. “Lane Kiffin’s a great play caller—he puts you in a position to make plays so it’s just on you to make the play.”

The win marked a signature victory for Ole Miss as they improved to 5-0 for the first time since 2014.

The Rebels will be back in action next week when they travel to Nashville to take on Vanderbilt at 3 p.m. on the SEC Network.