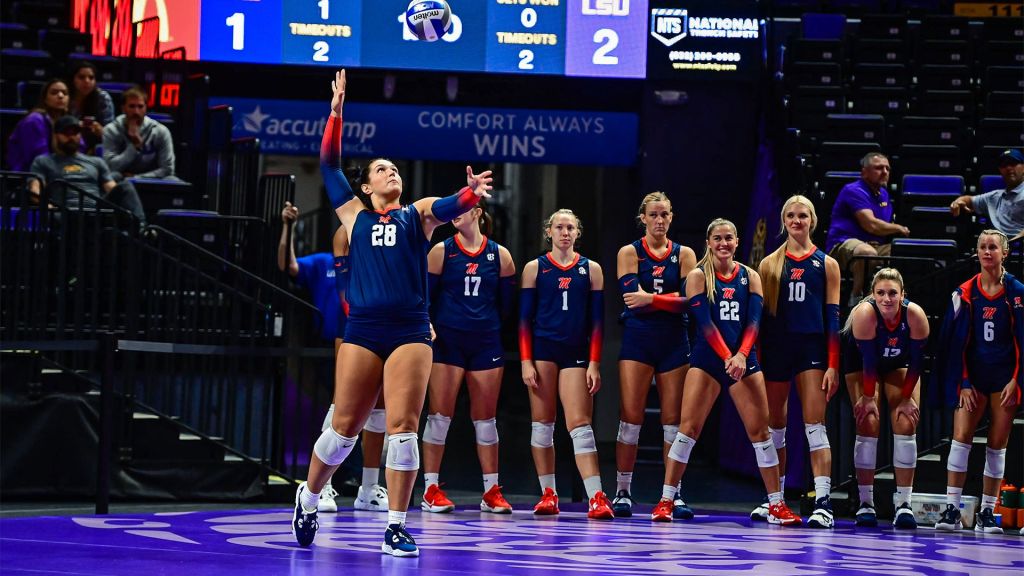 The Rebels (4-9, 0-3 SEC) were unable to overcome 30 attacking errors as LSU (9-5, 3-1 SEC) took advantage of the costly miscues. Freshmen Aly Borellis and Cammy Niesen both had career-best matches, finishing with 53 assists and 24 digs, respectively.

Senior Anna Bair etched her name into the Ole Miss record books in the fifth set, becoming just the 15th Rebel to record 1,000 kills in their career. The St. Louis, Missouri, native finished the match with 14.

Ole Miss grabbed the opening set, feeding the hot hand in Katie Corelli. The Rebels found separation with a two-point lead at the media timeout and continued to extend it as they scored six of the final seven points to take the set 25-18.

In set two, the Rebels fell behind early and burned a timeout after LSU took a 12-7 lead. Out of the break, the Tigers continued to stretch the lead to seven and ultimately evened the match with a 25-18 victory of their own.

With both teams even and a clean slate, Ole Miss and LSU went back and forth. The Rebels found an early 10-8 lead after back-to-back aces from Bair capped off a 6-1, but LSU quickly took it back, holding a 15-13 advantage at the media timeout. Ole Miss once again tied things up at 19 thanks to a massive swing by Corelli and an ace from Niesen; however, LSU responded again to take the set 25-22 despite a late push from the Rebels.

Backs against the wall, Ole Miss turned to Ratliff and Bair. The upperclassman duo combined for 14 of the team’s 19 kills in the set. Ratliff, in particular, came alive, at one point scoring five consecutive points for Ole Miss. Tied at 24 with the match on the line, career kill No. 999 and an ace from Bair kept the Rebels alive as they forced a fifth set.

Ole Miss fell behind 5-1 to start the winner-take-all fifth set but rallied back after Bair’s 1,000th career kill sparked new life into the team. The Rebels clawed all the way back, tying the set at 11. Ole Miss and LSU traded, but in the end, the momentum fell on the home side of the court as the Tigers took the final set and the match.

The Rebels look to even the weekend series with LSU Saturday at 6 p.m. CT.