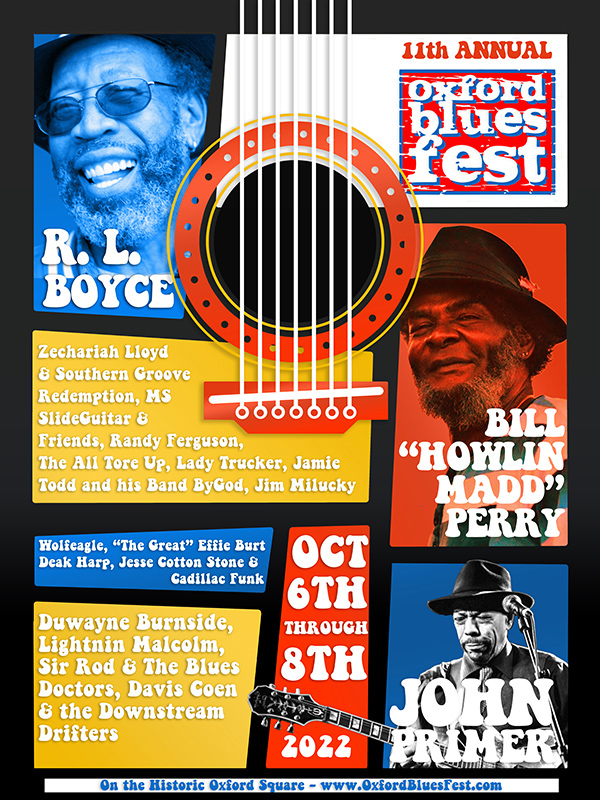 OXFORD – When office hours are over, some professors don’t hit the books – they hit the stage.

Four such University of Mississippi professors are among the 18 bands scheduled to play during the 11th Oxford Blues Festival, which runs Oct. 6-8 at Harrison’s near the Oxford Square.

Tickets for the festival, which also will feature Effie Burt, Lady Trucker, Lightnin’ Malcolm, are available at https://oxfordbluesfest.com/tickets. Students can purchase tickets at a discount.

Darryl Parker, an Oxford native and producer of the festival, said he created the event back in 2011 after several years of volunteering with different festivals around Chicago.

“It all started here. We have a rich culture that’s influenced the whole world here,” Parker said. “We want to introduce people to blues. You don’t have to like it, but if you’re exposed to it, you might. It’s everybody’s music.”

Gussow, author of a number of books on Southern culture and blues music, will play with the trio Sir Rod and The Blues Doctors and lead a workshop on playing the harmonica. Tickets for the Blues Harmonica Workshop are available online, and the first five people between the ages of 12 and 16 who sign up get a free harmonica, Gussow said.

Gussow said the festival will be the first time his trio has played in Oxford, though they toured up and down the East Coast over the summer. Gussow has been playing blues since 1986 and has toured on multiple occasions, notably as a part of the blues duo Satan and Adam, which was later featured in a Netflix documentary.

“There are an extraordinary number of truly important blues musicians from Mississippi,” he said. “We have that reputation that we can be proud of. Mississippi is best known around the world for its blues players.”

Though the field of blues and several surrounding genres are dominated by men, female musicians are out there, too. Slide guitarist Wendy Garrison, who has been playing folk and blues-inspired music for more than 30 years across Oxford and north Mississippi, said Parker has always sought out female musicians as he seeks to showcase Mississippi’s talent.

“I’ve found that the blues musicians of the South are totally accepting of me,” Garrison said. “Some folks in the music industry are gatekeepers – they certainly are not. I think it’s important to keep raising your hand and saying ‘Hey, we’re here.’”

Oxford has a place within the Mississippi blues tradition, though the city is more often associated with “Southern-fried Americana with a little bit of country and a little bit of jazz,” Gussow said. The festival highlights north Mississippi’s contributions to the genre, he said.

“It’s a chance for people in Oxford and surrounding area to come and see a lot of great music,” Gussow said. “As a blues scholar and performer, I think it’s the best lineup that Darryl’s ever put together.”