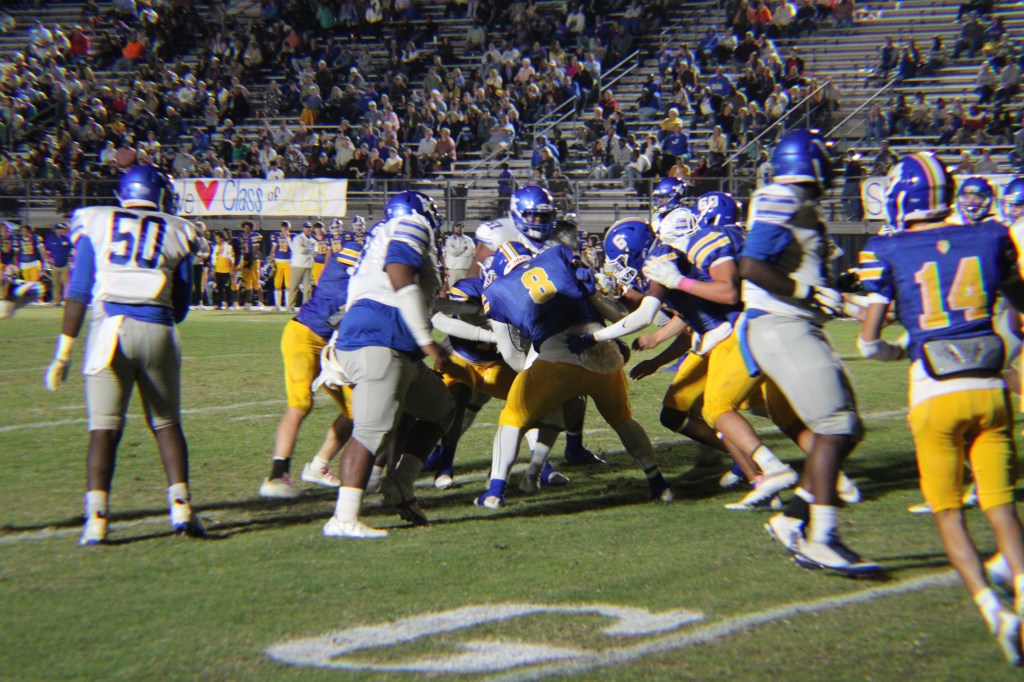 Water Valley running back Jaden Morgan is pushing his way past the line of scrimmage against Booneville. Water Valley defeated Booneville 47-21. (Jacob Palmer)

The  Water Valley Blue Devils used a potent offense, timely defense, and special team mistakes by Booneville to put the game out of reach at halftime in a 47-21 over the Blue Devils of Booneville.

The Battle of the Blue Devils started strong, with both teams battling back and forth before the Water Valley special teams used a timely fumble on the kickoff by Booneville (4-5, 1-2 Region 1-3A) to set up a 14-point swing in less than a minute. The Water Valley offense would score on every drive in the first half.

The Water Valley offense opened the game with a 40-yard Touchdown by Que Carothers. Booneville would answer back with a long drive of their own when Zion Nunn ran in for an 8-yard score to tie it after the PAT.

Water Valley would answer with a 17-yard pass from CJ Telford to Saveon Freeman to take the lead. Booneville would fumble the ensuing kickoff, and the Blue Devils would set up shop at the Booneville 6-yard line after Dayton Vaughan recovered the ball. Jaden Morgan would run it in 2 plays later.

The Water Valley would blow the game wide-open when CJ Telford hit Eli White from 45 yards out to take a 27-7 lead before the half. The Water Valley defense would get in on the action by forcing a turnover on downs in the red zone to close the half.

In the second half, the Water Valley offense got on the board first when Telford hit Carothers on a 48-yard pass on 4th down. The Blue Devils of Booneville would answer back when quarterback Noah Gillon ran in for a 62-yard touchdown.

The Booneville special teams unit would have their second fumble of the night, and Water Valley would take advantage of the mistake again on a Jaden Morgan touchdown run.

Water Valley’s defense would get in on the action in the second half when Will Embry intercepted a Gillon pass and ran it back 42 yards to put the game away.

“I am proud of him, he works hard, and we created a lot of turnovers tonight as a team. He has been close on offense, but to finally see him get one is a good, proud father moment, said Water Valley coach Brad Embry.

The Booneville offense would add another score with a 57-yard pass from Gillon to Avery Kelly. Water Valley would seal the deal when Reid Burress recovered a Zion Nunn fumble with less than two minutes remaining.

“The main thing is to be 1-0 each week and we won. Playoffs are coming soon, and everyone is trying to play their best football right now. Hopefully, this week, we get better for our game Thursday,” said Embry.

Water Valley(4-5, 2-2 Region 1-3A) will return to action Thursday, Oct. 27, as they host Alcorn Central for Senior Night at Bobby Clark field. Kickoff is at 7 p.m. With the win tonight, Water Valley has clinched a spot in the MHSAA Class 3A playoffs.