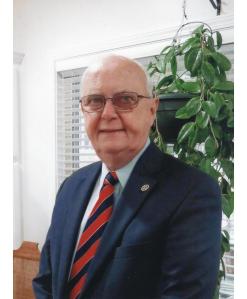 Alan “Skip” Beaty Jones passed away on November 13, 2022. He was 82 years old. He was named after his mother, Ala Beaty, but as a baby his father began calling him Skipper and the name Skip remained through the years. The family often says, “If someone called the house and asked for Alan, we can assume they do not know him and are trying to sell something.” Skip was born on September 25, 1940, in Mount Vernon, IL. He graduated from Sinton High School in Sinton, TX in 1958, received his BS (studying physics) and MS (studying cellular toxicology) from University of Texas, Austin in 1963 and 1968 and his PhD (studying radiation microbiology and radiation sensitizing agents) from the University of Manchester in 1971. He married his wife of 51 years, Joan Groce Jones, on June 26, 1971, and they raised two daughters, Kimberly and Camilla. Skip served in the US Army, entering the Reserves in 1963 and continued to work on his masters during this time. In February of 1969, he was stationed at the 97th General Field Hospital in Frankfurt, Germany where he worked in the pharmacy. It was here that he met Joan. He was discharged in July 1970 and returned to Manchester to complete his PhD. Skip’s education led to a variety of jobs. Coming first to the University of Mississippi (Ole Miss) in October of 1971. Skip planned to be there as a Post-Doc Fellow for just a few years; however, by January of 1972, Skip accepted a faculty position in the School of Pharmacy at Ole Miss. He remained in academia at Ole Miss serving as faculty, graduate program director, and department head during his time. His work at Ole Miss opened a variety of research opportunities including Navy Forensic Drug Testing, National Institute of Drugs and Abuse Drug Testing, Forensic Drug Testing Laboratory inspections, Department of Transportation Forensic Drug Testing Program, Medical Review Officer Program, Substance Abuse Management, and many others. The drug testing industry pulled Skip into work after retirement from Ole Miss in 1999. He transitioned from academics to working full-time with the Substance Abuse Management Inc and Managed Athletic Testing Services in Milwaukee, WI and Boca Raton, FL. He retired (again) in 2006 when he and Joan moved to The Villages, FL. From a young age, Skip enjoyed fishing, cars, and the outdoors. He was an Eagle Scout and remained active in Boy Scouts helping at Philmont Scout Ranch, even though he did not have any boys of his own. He also remained devoted to his collegiate fraternity, Sigma Chi, serving as the chapter advisor for the University of Mississippi chapter for many years. During retirement, his enjoyment of bird watching, container gardening, putting together puzzles, and reading only expanded. He kept detailed notes of the books he read, with many of his favorites being by John Grisham, John Hart, Tony Hillerman, Stuart Wood, James Patterson, and Ken Follett. He was a man of faith and appreciated his interaction with his church and being a part of the Knights of Columbus Council #8488 and the Fourth Degree Msgr Arthur J. Luckey Assembly. Skip will not only be remembered for his impeccable intellect and his ability to explain any form of scientific or mathematical equation, birds, or vehicles, but he will be remembered as a patient, devoted, and loving husband and father. Skip is preceded in death by his father (William Paul Jones), mother (Ala Beaty Jones), brother (William), and two children and two grandchildren who all died before birth. He is survived by wife Joan, daughters Kimberly Ivester (Kelly) and Camilla Roberts (Kevin) both of Manhattan, and four grandchildren (Jackson and Will Ivester and Morgan and Taylor Roberts). The Rosary will be said at 6:30 pm followed by a visitation from 7:00 to 8:00 pm on Sunday, November 20, at Yorgensen-Meloan-Londeen Funeral Home, Manhattan, KS. Mass of Christian Burial will be held at St. Thomas More Catholic Church on Monday, November 21, at 10:00 am followed by interment at Kansas Veterans Cemetery at Fort Riley. In lieu of flowers, Skip and the family have requested that in memory of his love of reading, a donation be made to a public or local school library. Contributions may be sent in care of the Yorgensen-Meloan-Londeen Funeral Home, 1616 Poyntz Avenue, Manhattan, Kansas 66502. Online condolences may be left for the family through the funeral home website at www.ymlfuneralhome.com