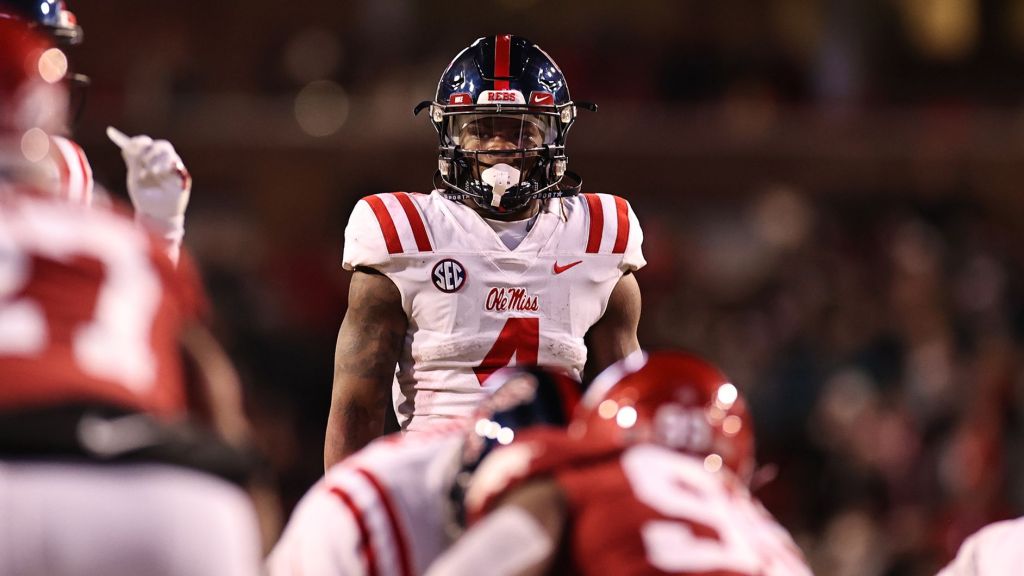 Ole Miss running back Quinshon Judkins (4) plays against Arkansas in the Rebels' 42-27 loss to the Razorbacks on Saturday. Judkins was named SEC Freshman of the Week on Monday. (Ole Miss Athletics)

BIRMINGHAM, Ala. –Quinshon Judkins continues to terrorize defenses across the Southeastern Conference, and the league office continues to take notice, selecting the Ole Miss football freshman phenom for his fifth weekly honor of the season on Monday.

Once again named SEC Freshman of the Week, Judkins earned the Rebels’ 10th weekly honor of the season. The rookie out of Pike Road, Alabama, has accounted for five of those, Nick Broeker has earned two, while Jonathan Mingo, Micah Pettus and Jared Ivey have each joined the weekly honor roll once in 2022.

It was yet another mammoth performance for Judkins against Arkansas. The Midseason Freshman All-American eclipsed 200 yards rushing for the second time in three games, going for a career-high 214 and one touchdown on 24 carries. He has scored a rushing touchdown in nine straight games and has six multi-TD games in that span.

Judkins is the lead back in the No. 1 rushing offense in Power 5. Judkins and Zach Evans have combined for 2,284 rushing yards on the season, more than any other pair of teammates in the nation.

It’ll be a quick turnaround for Judkins and the Rebels, who will work through a short week to prepare for Thursday’s Egg Bowl matchup with Mississippi State. The Thanksgiving Day kickoff is set for 6 p.m. CT on ESPN.