30th anniversary of ‘The Stand:’ a look back at five memorable games in Egg Bowl history 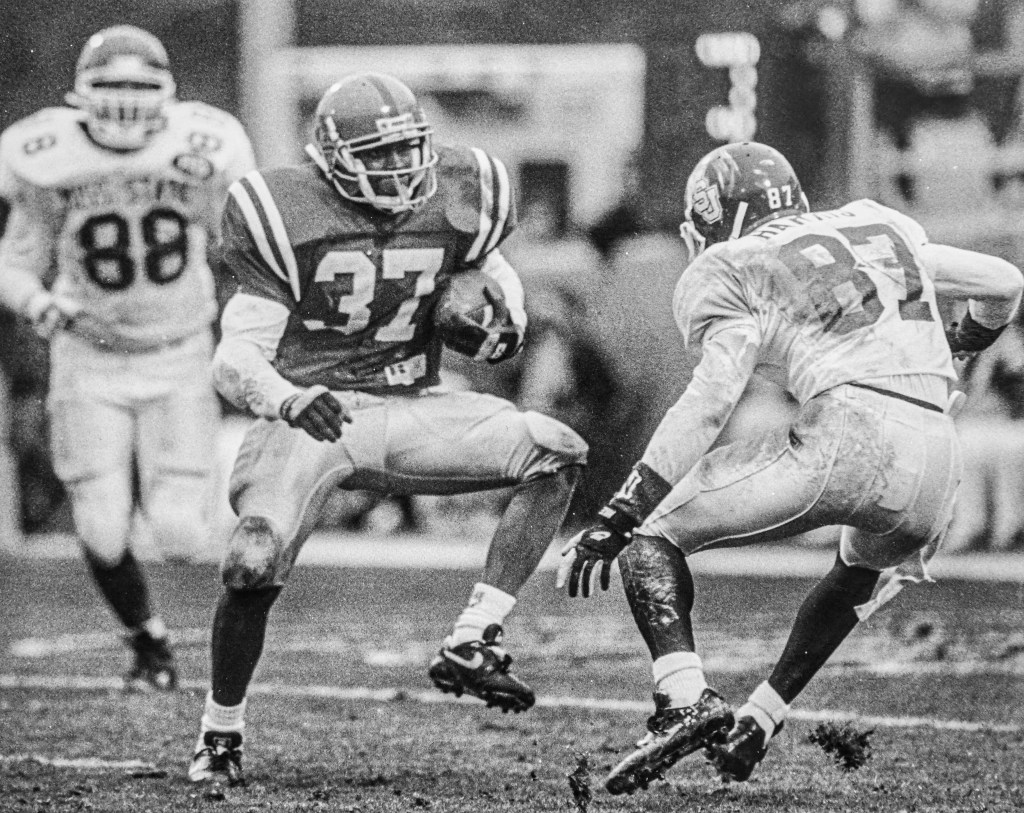 Ole Miss defensive back Michael Lowery (37) intercepts a pass as part of what became known as “The Stand” in the 1992 Egg Bowl. (©Bruce Newman)

This year marks the 30th anniversary of the historic 1992 Egg Bowl, affectionately referred to by Rebel faithful as “The Stand.”

As No. 20 Ole Miss prepares to take on in-state rival Mississippi State in the 119th edition of the Egg Bowl, here is a look back on the iconic game and a few other historic installments of the rivalry.

The 1992 Egg Bowl marked a significant moment in the rivalry as both teams entered the contest with bowl eligibility for the first time in 29 years.

The Rebels, who were picked to finish last in the conference prior to the season, put together an impressive 7-3 record heading into the final week of the regular season and looked to secure a second-place finish in the West with a win over Jackie Sherrill’s Bulldogs.

Mississippi State entered the contest averaging 204 rushing yards per game, but were held to just 40 yards on 41 carries by an Ole Miss defense that put together their best performance of the year when it mattered most.

The stellar defensive outing was highlighted by a pair of remarkable goal-line stands in the final four minutes of action.

The Rebels led 17-10 in the closing minutes, but the Bulldogs took possession at the Ole Miss 42 yard line and quickly drove inside the 10 to set up first and goal from the seven.

The Ole Miss defense came up with a huge stop however as defensive back Michael Lowery picked off Jordan in the end zone to give the Rebels the ball back at their own two yard line with just over two minutes remaining in the contest.

The chaos did not end there however, as Rebel running back Cory Philpot fumbled on the second play of the drive to give the Bulldogs possession at the eight yard line.

The defense held strong with the game on the line once more, but a pass interference call on 4th and goal gave Mississippi State yet another opportunity at the goal line.

After running back Randy Brown nearly broke the plane on first and goal, the Rebel defense came up with back-to-back stops behind the line of scrimmage to set up 4th and goal from the six.

With the game on the line, quarterback Greg Plump fired a pass to receiver Willie Harris that tipped off his hands and fell innocently into the end zone with just 19 seconds on the clock.

The win marked the first Egg Bowl victory for the Rebels in Oxford in 20 years (the game was played in Jackson from 1973 to 1990) and became an instant classic in the long-standing rivalry.

The 2019 Egg Bowl had plenty of on-field intrigue as the Bulldogs held on to a narrow victory in the closing minutes, but the off-field ramifications altered the destinies of both schools for years to come.

The Rebels scored on a two-yard touchdown pass from Matt Corral to Elijah Moore with less than five seconds on the clock and had a chance to tie the game with the extra point, but were backed up on the try following an unsportsmanlike conduct penalty as Moore was flagged for getting down on all fours and mimicking a dog urinating in the end zone.

Kicker Luke Logan proceeded to push the 35-yard try wide right and the Bulldogs escaped with a one-point victory.

The former Tennessee, USC and Florida Atlantic head coach made an immediate impact for an Ole Miss program that was still dealing with the fallout from an NCAA investigation that found 15 Level I violations under head coach Hugh Freeze.

The repercussions did not end there however, as an investigation by The Athletic’s Max Olsen and Bruce Feldman determined that the fallout from contest led to nearly 300 coaching changes across the college football landscape.

The 1999 Egg Bowl, known as “The Pick and the Kick,” saw the Bulldogs erase a 20-6 deficit as they tied the game with less than 30 seconds remaining before Ole Miss quarterback Romaro Miller was picked off by Mississippi State’s Eugene Clinton who ran the ball deep into Rebel territory in the closing seconds.

The play set up a game-winning 43-yard field goal by Bulldog kicker Scott Westerfield as Mississippi State snapped a two-game losing streak to finish 9-2 on the season.

The Rebels, who entered the game at No. 23 in the AP poll, dropped from the rankings before knocking off Oklahoma in the Independence Bowl.

The 1983 Egg Bowl, nicknamed “The Immaculate Deflection,” came down to a last-second field goal attempt as Ole Miss overcame a 17-0 first half deficit to take a 24-23 lead before the Bulldogs drove down the field to set up a 27-yard attempt in the closing seconds.

Kicker Artie Crosby connected on what appeared to be the game-winning kick, but a 40 mile per hour gust of wind knocked the ball down just shy of the crossbar in a feat of divine intervention.

The victory capped a five-game winning streak to close the regular season as the Rebels secured their first winning season in six years and their first bowl appearance in 12 years with the largest comeback in Egg Bowl history.

The 1962 Egg Bowl was the only installment of the rivalry with national championship implications, as the Rebels entered the game with a perfect 8-0 record with a chance to secure the fifth SEC title in program history.

The 13-6 victory marked their 16th consecutive win in the series and earned them a spot in the 1962 Sugar Bowl, where they knocked off Arkansas 17-13.

Undefeated USC was named national champion by the Associated Press, but the Rebels laid claim to the title as well as they finished the only undefeated and untied season in program history.