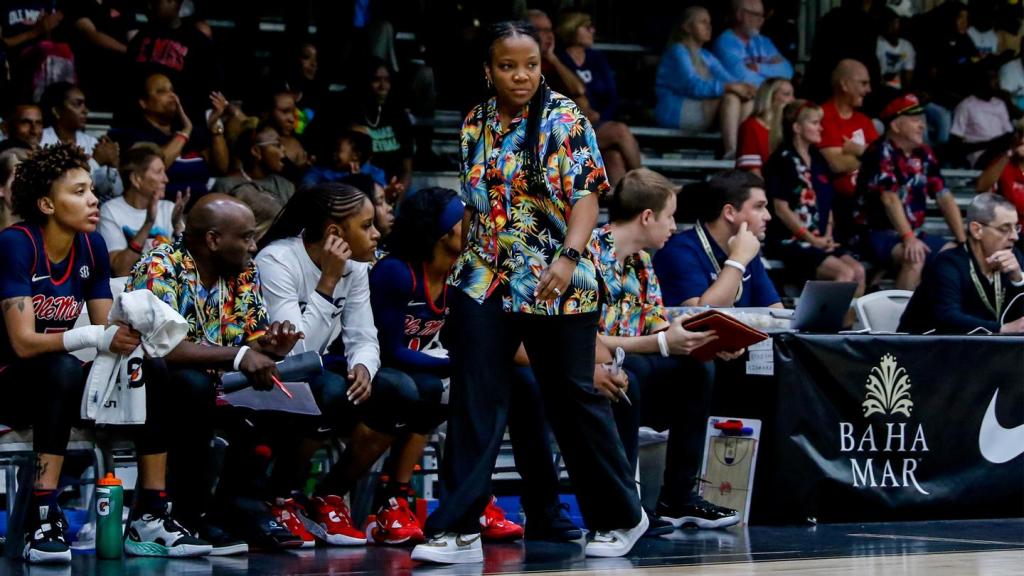 NASSAU, Bahamas – Ole Miss women’s basketball used a dominant fourth quarter to run past the Dayton Flyers and win their fifth game in a row Monday night in Nassau. The Rebels outscored the Flyers 21-10 in the final 10 minutes of play, forcing seven turnovers and out-rebounding Dayton 10-5.

Tyia Singleton was the leading scorer for the Rebels, putting together her first double-double of the season. Singleton scored a season-high 14 points and tied her career-high with 13 rebounds. Nine of her rebounds came on the offensive side of the ball, the most offensive rebounds by a Rebel since February 3, 2022 when Caitlin McGee pulled down nine against Missouri.

Marquesha Davis scored 10 points, giving her three games in a row scoring in double-digits, and Rita Igbokwe pulled down a season-high seven rebounds.

Ole Miss as a team pulled down a season-high 46 rebounds and turned the ball over just 12 times, their second-lowest total of the season.

The first half was a defensive clinic by the Rebels as they forced 11 turnovers and had seven steals in the opening 20 minutes. They scored 13 points off those 11 turnovers, taking advantage of the miscues by the Flyers.

The offense ran through Singleton in the first half as senior shot 50 percent from the floor and had 12 points. She was just two rebounds shy of a first half double-double with eight boards.

Ole Miss took a 30-25 lead into the halftime break.

Dayton came out hot in the third quarter, outscoring the Rebels 15-12 and holding them to just 27.8 percent shooting. They used an 11-4 scoring run to cut the Ole Miss lead to just two points with 10 minutes left to play.

With the game tied at 44-44 and 6:49 left on the clock, Madison Scott knocked down a jumper to launch a 14-0 scoring run for the Rebels. They held the Flyers to zero field goals for over seven minutes of play and forced six turnovers during that time. Scott and Snudda Collins scored six points apiece during the run, igniting the Rebel offense and giving Ole Miss a 14-point lead with under three minutes to go.

The Rebels built their biggest lead of the night at 63-46 with just 1:21 left to play. Dayton scored twice under a minute, but it was all over as Ole Miss stayed undefeated on the season.

Ole Miss will now turn their attention to Wednesday night when they are set to take on No. 17 Utah at 7:00 p.m. Central time.