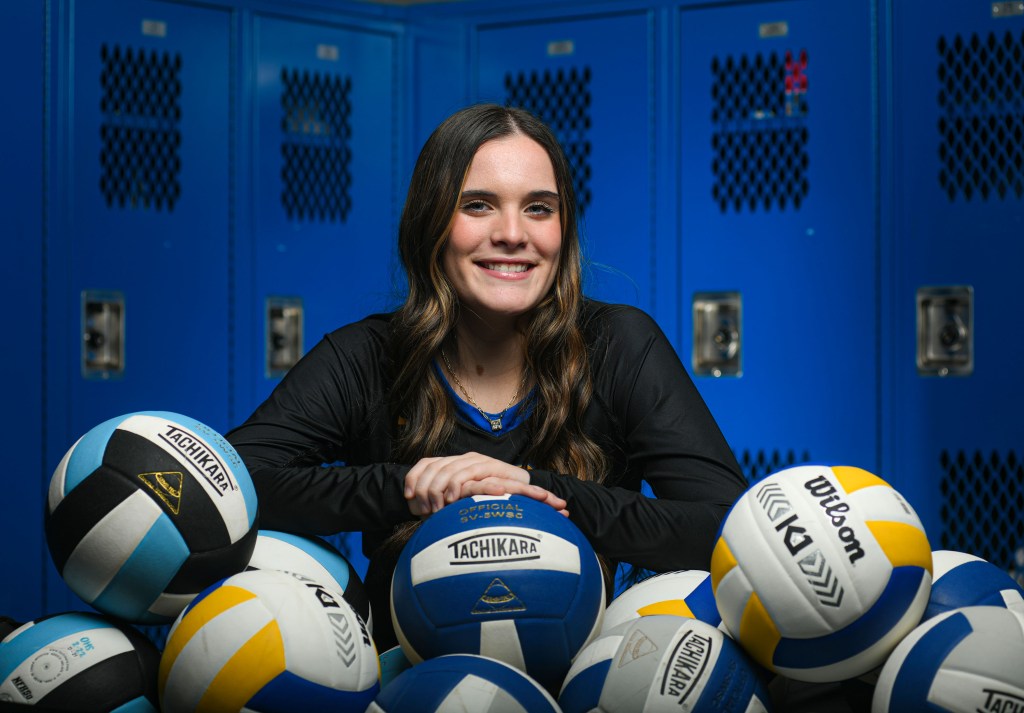 Oxford volleyball player Bree Lyons, in Oxford, Miss. on Monday, November 14, 2022. Lyons is the Oxford Eagle’s Player of the Year in 2022. ©Bruce Newman)

This was destiny for Bree Lyons.

The Oxford senior, who made her varsity debut as an eighth grader in 2018, made it her mission to etch her name into the storied program’s record books after her older brother convinced her she had a chance to truly make a name for herself if she worked hard enough.

She did just that this season, setting career-highs in kills and digs as she became the first player in school history to reach 1,000 career kills.

Lyons said her older brother’s encouragement meant the world to her, especially after he was stationed in Hawaii prior to her senior year.

“It’s really important for me to make him proud. He’s one of my biggest heroes because he’s such an inspiration to me,” Lyons said.

Her hard work and determination paid off in spectacular fashion this season as she racked up 329 kills and 312 digs while leading the Chargers to the North Half semifinals.

“I knew I had big shoes to fill because Catherine Bianco and Ainsley Tacke were great captains last year and they led us to [the state championship match],” Lyons said. “I knew this year we would have to step up even more and dig deeper than we ever did.”

Her 1,003 career kills stand alone at the top of the school’s all-time leaderboard as she broke Maggie Hobson’s record with a 10-kill performance in a 2-1 win over eventual 6A state champion Brandon on Oct. 3.

Head coach Ashley Martin said that Lyons’s leadership set the tone throughout the season and helped establish a unique synergy that set the team apart from other groups she coached in the past.

“Bree will always be remembered as a great leader who always pushed and led her teammates to be the best on and off the court. Bree is someone you want on the court not only for her athletic skillset but for her leadership as well,” Martin said. “I was able to watch Bree grow as a player and an individual for three years, and thinking back about how she grew as a leader makes me happier than any record you can achieve.”

Martin added that the way Lyons conducts herself off the court exemplifies exactly what she looks for in an athlete.

“As a coach, I hope players look back on their high school journey and enjoy it… as they walk out that door for the final time, I want them to look back and realize how much they have grown as a person since the moment they first walked in that door,” Martin said. “There is more to it than just the game and being an athlete. I teach each player to have life lessons to help them on their next journey in life because there is life after the game. Bree exemplifies what I want my players to be on and off the court, and I can not wait to see her grow as a person in her next journey.”

Lyons’s next journey will be at Itawamba Community College, where she is committed to play volleyball.

Her goal there? To set even more records.

“I broke a record here but that’s still the goal wherever I go,” Lyons said. “So at ICC I’m just going to play my best, see how far I can get and try to break a record there too.”

Note: The full Oxford Eagle All-Area team will be released on Saturday.