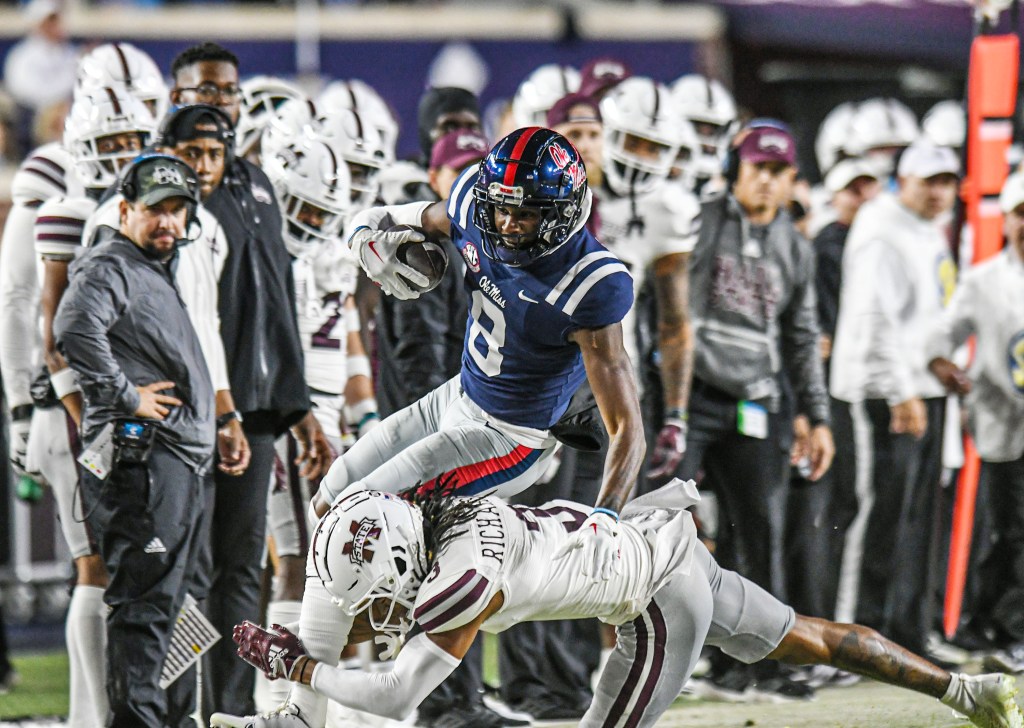 “[It’s] just really discouraging… I had a hard time picturing this happening when the game was going so [it’s] difficult — always difficult to end your season with a loss like this.”

The Rebels jumped out to a nine-point lead in the first half, but were unable to fend off the comeback as they were held to seven points or fewer after halftime for the sixth time this season.

The offense looked lifeless in the second half, mustering just three yards on the ground and fewer than 100 through the air against a defense that gave up over 333 yards per game this season.

“Credit to Mississippi State, they played really hard,” Kiffin said. “Zach Arnett — I’ve said for a long time that he does a great job, gives people problems. [He’s] very risk-taking and came out today and was extremely aggressive.”

Ole Miss recorded a season-low 335 yards of total offense in the defeat, their fourth in their last five outings.

They failed to reach 100 yards on the ground for the first time this season as the Bulldogs keyed in on their prolific rushing attack with great success.

Mississippi State loaded the box throughout the night and brought extra rushers on nearly every play, registering a season-high 15 tackles for loss.

Ole Miss quarterback Jaxson Dart said the team was unprepared for the for level of pressure, adding that the Bulldogs’ cover-zero looks kept them behind the chains and forced them into plenty of third-and-long situations.

“I think they brought a lot more pressure than we kind of expected,” said Dart. “I thought in the second half they did a good job pinning us deep… they had a good game plan.”

Despite their offensive woes, the Rebels still had a chance to even the score in the closing minutes after Mississippi State quarterback Will Rogers fumbled on the goal line with just under five minutes remaining.

Ole Miss proceeded to put together their best offensive drive of the game when it mattered most, driving 99 yards on 10 plays and capping it off with a 23-yard touchdown pass from Dart to receiver Dayton Wade.

The Rebels were unable to convert the two-point conversion however as Mississippi State defensive lineman Randy Charlton made a great read on a fake pitch play to get his hand on the ball and knock down a shovel pass intended for Jonathan Mingo.

The defeat marked the fourth loss for Ole Miss in their last five outings, including three straight to end the regular season.

Dart said the only way to move forward is to focus on building momentum for next season with a bowl victory.

“We want to finish this year off the right way,” he said. “Our focus is on tomorrow, we’re just gonna try to get better, get back on track and have a lot of momentum going into next year… It’s no shock that this year — we have so many guys that are new to the squad and playing really key roles so I think just getting a win is big for us and will give us momentum for next year.”