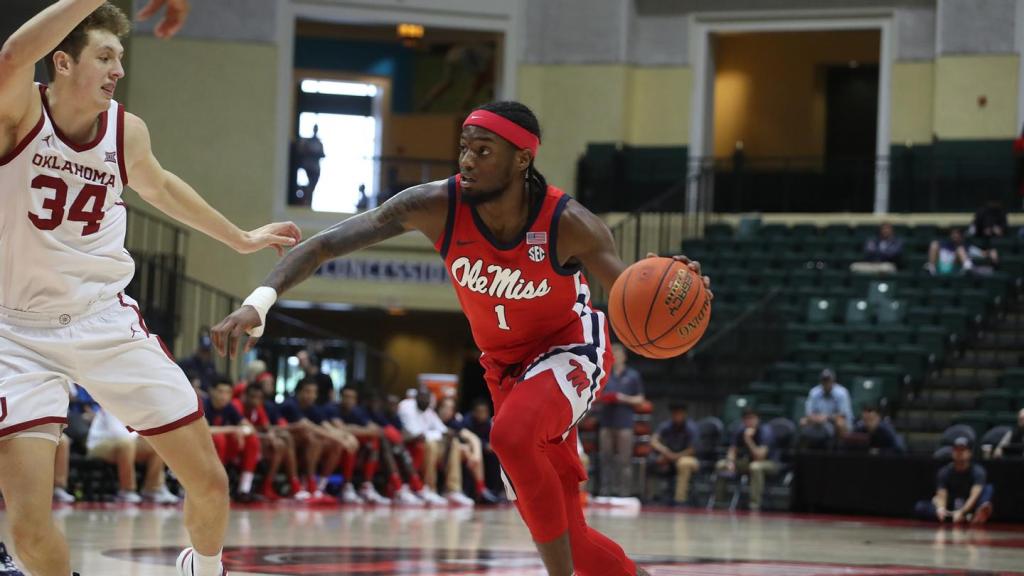 ORLANDO, Fla. – Ole Miss men’s basketball received another excellent game from its freshmen, but a late second-half Oklahoma run helped the Sooners slip by the Rebels, 59-55, in the championship game of the 2022 ESPN Events Invitational on Sunday afternoon.

Freshmen Amaree Abram (17 points) and TJ Caldwell (10 points) combined for 27 points and were 11-of-19 from the field for Ole Miss (6-1), but a physical Oklahoma (6-1) squad that owned one of the NCAA’s best defenses entering play used that to great advantage in the second half. The Sooners shut down an Ole Miss offense that shot 50 percent in the first half to just 39 percent overall and 1-of-7 from three in the second half, during which they used a 10-0 run to catch both the Rebels and the momentum. In total, the back-and-forth affair featured both nine lead changes and nine ties each.

The first half was an evenly matched title bout, as both squads shot above 50 percent and made at least four three-pointers apiece, with Ole Miss going 5-of-11 from deep to Oklahoma’s 4-of-6 line. Junior Matthew Murrell (eight points) hit the first of those five trifectas right out of the gate at the 18:15 mark to put the Rebels on top, but that would be just one of four lead changes in the opening half.

Both teams exchanged buckets consistently throughout the half, with the largest lead being an Ole Miss five-point advantage with 4:22 to go after a three-pointer off the bench by Tye Fagan (three points) at 5:02 and a jumper by Jaeveous McKinnis (six points, six rebounds, three steals, two blocks) at 4:22 gave the Rebels a 30-25 lead. From there, both teams went shot-for-shot, with a layup by Oklahoma’s Sam Godwin (11 points) with 33 seconds left cutting Ole Miss’ lead to the eventual halftime score of 34-32.

Ole Miss did not go quietly, however, mounting a 13-4 run of its own over the next five minutes of action to make it a ball game down the stretch. Included in that run were seven consecutive buckets by the freshman Abram from 7:02 to 4:59, with a Myles Burns (four points, four rebounds, two steals) fastbreak dunk at 4:26 giving Ole Miss a three-point lead at 55-52.

The Sooner defense caught its wind again when it counted, however, forcing Ole Miss to go 0-for-7 over that final 4:26 while closing the game on a 7-0 run to edge out the Rebels, 59-55, for the victory.

Although the Rebels came up short in the title game, the play of freshman point guard Amaree Abram is a key bright spot for a team that has been without star point guard Daeshun Ruffin all season. Across his three games at the ESPN Events Invitational, Abram averaged 20.7 points per game and shot a blistering 64.1 percent from the field (25-of-39), 75 percent from three (6-of-8) and was a perfect 6-of-6 from the free throw line while accounting for 30.1 percent of all Rebel scoring in the tournament.