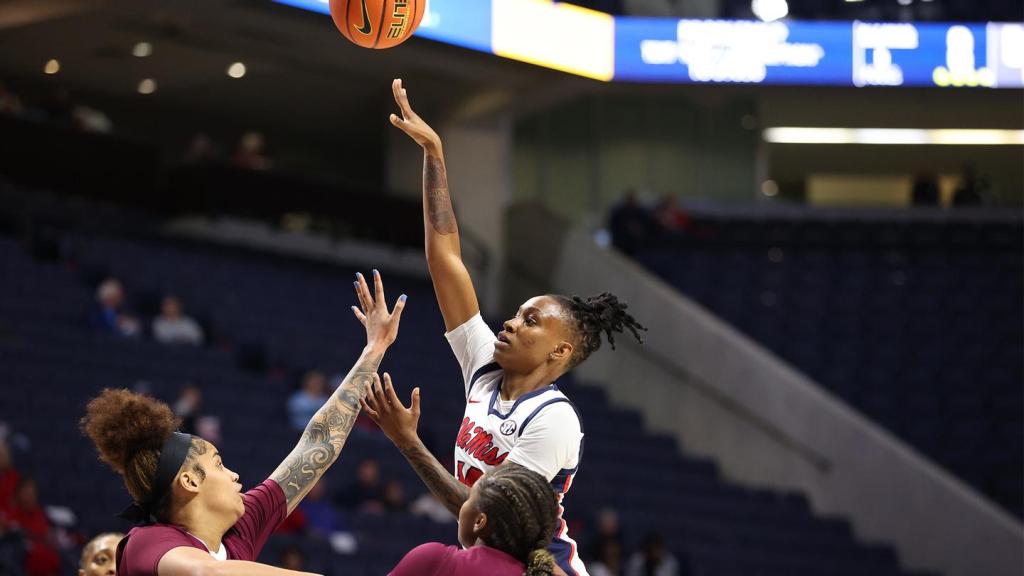 After spending Thanksgiving break in The Bahamas at the Baha Mar Pink Flamingo Championship, the Ole Miss women’s basketball team was welcomed back home with open arms in a dominant 93-47 win over Texas Southern at the SJB Pavilion Monday night.

Scott grabbed her second double-double of the season, tacking on a season-high 15 rebounds. Thompson’s 10 points is a career-high for the freshman, while Taylor’s 10 ties her season-best points. Taylor also dished out eight assists, another season-high for the Mississippi State transfer.

Defensively, the Rebels (6-1) dominated the Tigers (0-7), holding Texas Southern to only 25.5 percent (13-51) from the field. Tonight’s effort by the Ole Miss defense marked its fourth game this year holding opponents to 50 points or fewer. The Rebels are holding their opponents on average to 52.7 points per game thus far in the season.

The first quarter started out with a solid performance from Ole Miss, with Marquesha Davis catching a jumper assisted by Angel Baker to put the Rebels on the board. Ole Miss didn’t let up from there, going on a 17-0 run while holding the Tigers scoreless until 2:41 left in the quarter and only allowing four points from Texas Southern.

The Tigers bounced back in the second quarter, adding 17 points to their score. Scott defended on both sides of the court for Ole Miss by grabbing six of her overall 15 rebounds in the second to lead Ole Miss into the half at 44-21.

The second half got underway with a jumper by Baker, who ended the night one-point shy from reaching double-digits. The Rebel defense came out of the half just as fiery, forcing three turnovers in the first two minutes of the third. Scott went 2-for-2 from the field in the quarter, securing her double-double.

In the final 10 minutes of the matchup, Ole Miss shut down Texas Southern, going on a 7-0 run to secure its 11th straight non-conference home win.

The Rebels have a quick turnaround, as they face off with another SWAC opponent in Alabama A&M on Tuesday night at the SJB Pavilion. Tip-off is set for 6 p.m. CT and will be broadcasted on SECN+.