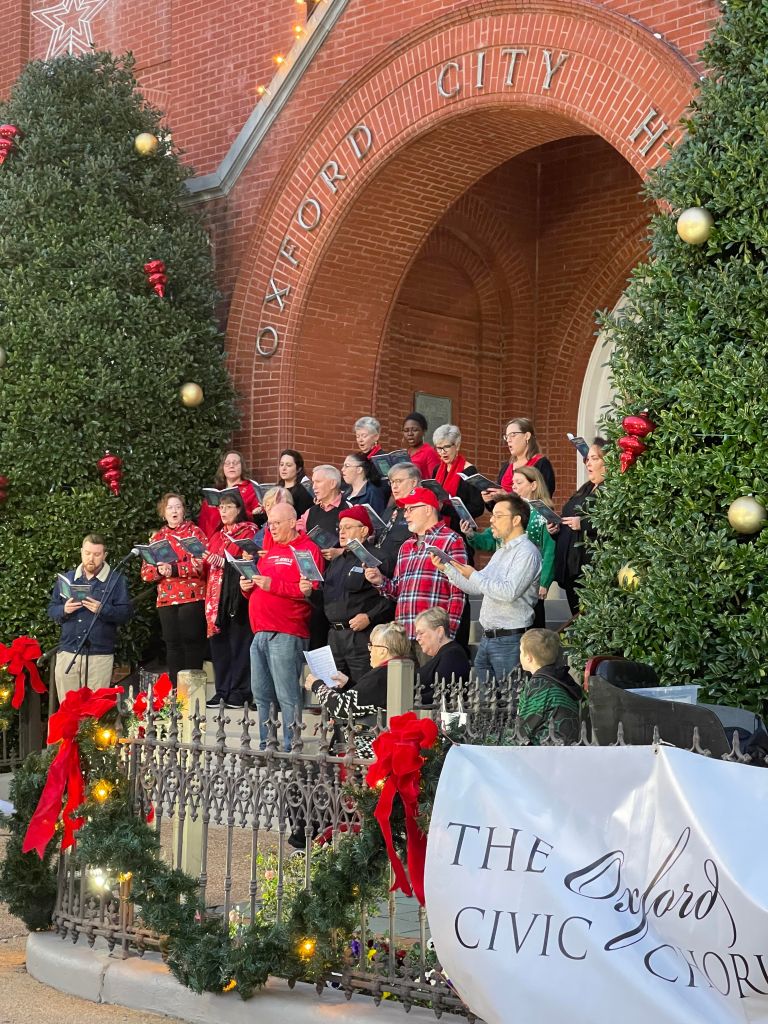 On Sunday, Dec. 4th at 3 p.m. in the David H. Nutt Auditorium on the Ole Miss campus, the group will continue to welcome in the holiday season with a show titled, “Wintertide Awakes.”  According to Holder, the goal of the musical performance is to carry the listener through some of the typical stages associated with the weeks and days leading up to Christmas.

The full-length concert with choir, string ensemble, and piano feature pieces by a variety of composers.  “We are traveling through the winter season with our music in anticipation of Christmas,” said Holder, “going through some pieces that reflect snow, darkness, the different elements associated with wintertime.  Then growing into pieces surrounding Christmas and light, and then finally a really joyful declaration of Christmas at the end.”

The lighting of the Christmas tree event on Oxford Square on Friday, Nov. 25th was highlighted by the singing of holiday favorites by the popular local group, Oxford Civic Chorus.

Families came out from 5 p.m. to 6 p.m. to meet special guests, Santa and Mrs. Claus, and also to kick off the season with caroling sing-alongs of Christmastime classics.

“It went really well,” said chorus co-director Creighton Holder.  Although there was only a stripped down version of the full group that met for the tree-lighting event, there were still enough singers to fill the entire steps of Oxford City Hall.

About a third of the usual group came together to read traditional carols, and tunes that are familiar to so many who rise to the spirit.  “We wanted to incorporate a lot of pieces that people could sing along with, that they’re used to hearing in a traditional caroling setting,” said Holder.

“It was an enhanced experience, because it was part for the audience–in that it was the voices from the Civic Chorus, which has several vocal musicians with a lot of experience in singing–but still accessible for the audience, in a way that everybody could participate and join in.  So it went really well,’ said Holder.

He also looks forward to premiering a new piece that Holder himself arranged for the chorus.  He and his co-director, Deborah Atkinson, will both be serving as pianists, including the string quartet on hand.

Holder described the set for the Sunday event as “a large variety of traditional carols from a broad demographic of countries.”  Traditional carols will hail from countries including Italy, England, Ireland, Austria, and France.

He particularly looks forward to the chorus singing such well-known favorites as,  “Sure on This Shining Night” by Morten Lauridsen, “Glow” by Eric Whitacre, “Wexford Carol” by Elaine Hagenberg, and a new arrangement of his own, of “Bring a Torch.”

The concert is free and open to the public.  “Everyone is welcome,” said Holder.  “There’s something for all ages, by way of the music selections.”

He said the chorus is also getting excited for the upcoming spring season, and have already started planning for a concert.  “We’re collaborating with local nonprofit organizations, as well as another community choir from Greenwood, Mississippi.”

Oxford Civic Chorus is a 501(c)(3) nonprofit organization dedicated to inspiring singers since 1998.  The choir gathers for weekly rehearsals, ​performs two concerts a year, and is available to sing at local events.

Information for people to join, volunteer or to donate can be found on the website OxfordCivicChorus.org.