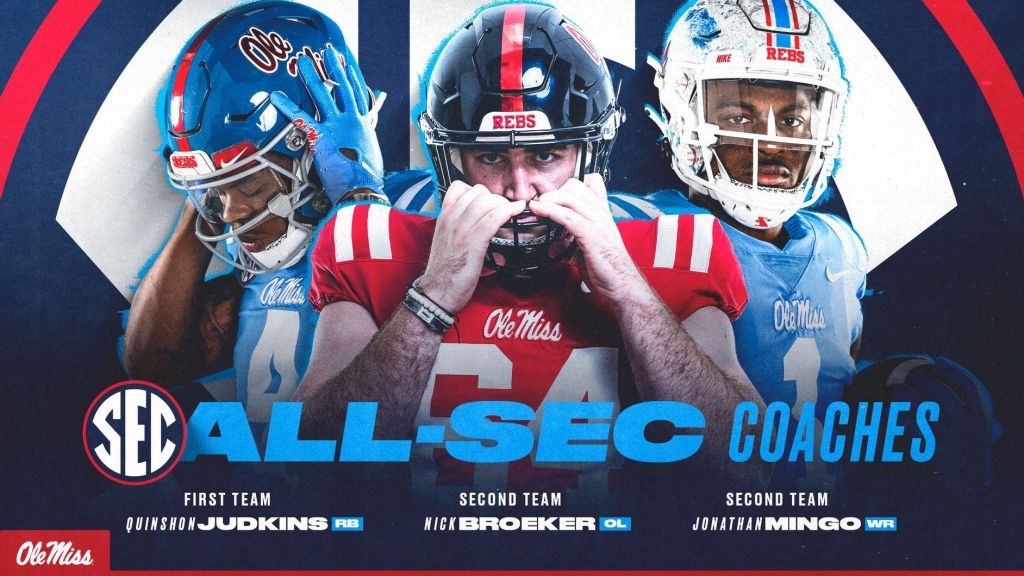 Broeker has started all 12 games for the Rebels at left guard, playing in nearly all offensive snaps (907). Broeker hasn’t allowed a sack in 505 pass blocking snaps and is anchor for an Ole Miss offense that ranks No. 3 in the FBS in rushing yards per game (261.6) and No. 7 in total offense (491.2).

The Springfield, Illinois, native is a member of offensive line unit that has helped blocked for a rushing attack that features the only team in the country with two players over 850 yards rushing. Ole Miss is the only FBS team with more than 5,500 yards of total offense, while having more than 3,000 yards rushing.

Mingo has hauled in 48 receptions for 808 yards and a team-high five touchdowns. The senior from Brandon, Mississippi, leads the Rebels with 38 career starts and has tallied over 1,700 receiving yards over his four years in an Ole Miss uniform.

Mingo had a career day vs. Vanderbilt earlier this year. He became Ole Miss’ top single-game receiver in program history following a 247-yard performance on nine catches and two scores against the Commodores. Mingo broke Elijah Moore’s 2020 single-game record of 238 yards. Mingo’s high-octane outing is the best single-game receiving performance this season by any wideout in the FBS and also ranks 13th in SEC history.