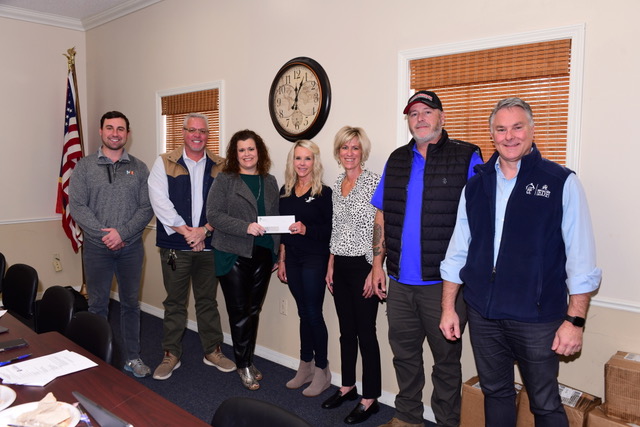 The 25th annual Double Decker Spring Run, hosted by the Oxford-Lafayette County Chamber of Commerce, may have been held in late April, but the impact of the successful event is still being felt by Oxford’s YMCA.

The 2022 spring run was presented by Oxford Orthopaedics and Sports Medicine and attended by over 1500 runners.

The Oxford-Lafayette County Chamber of Commerce continues to partner with the Oxford YMCA as its race host location. As part of that partnership, the Chamber shares a portion of the registration fees with the Oxford YMCA, with $1 of every race registration going to the YMCA’s Annual Campaign. Registration was also set up for people to donate additional dollars to the YMCA at checkout, which resulted in even more support.  The total amount the Chamber donated this year to the YMCA was $2,263.  Last week at the Chamber Board of Directors meeting the Chamber presented YMCA Chairwoman Hope Sneed and YMCA Director Leslie Kennedy with a check for $1,546.  The remaining donations were donated as additional add ons by the race registrants, and were sent directly to the YMCA.

The Oxford YMCA is a non-profit organization whose mission to help strengthen the community. Strengthening the community runs right in line with the Oxford Chamber’s mission.

In the community the Oxford YMCA works side-by-side with its’ neighbors to make sure that everyone, regardless of age, income or background, has the opportunity to learn, grow and thrive.

“The Oxford YMCA is proud to partner with the Oxford-Lafayette Chamber of Commerce and the Double Decker run,” says Oxford YMCA director Leslie Kennedy. “It is exciting to be part of such a great event that brings our community together.  We are grateful to the Chamber for helping to make a positive impact in our community with this donation.”

The 2023 Double Decker Spring Run will be held on April 29th, 2023. The registration window for the race will open to the public in early 2023 at www.doubledeckerspringrun.com.