Rebels use late surge to down Broncos in opener 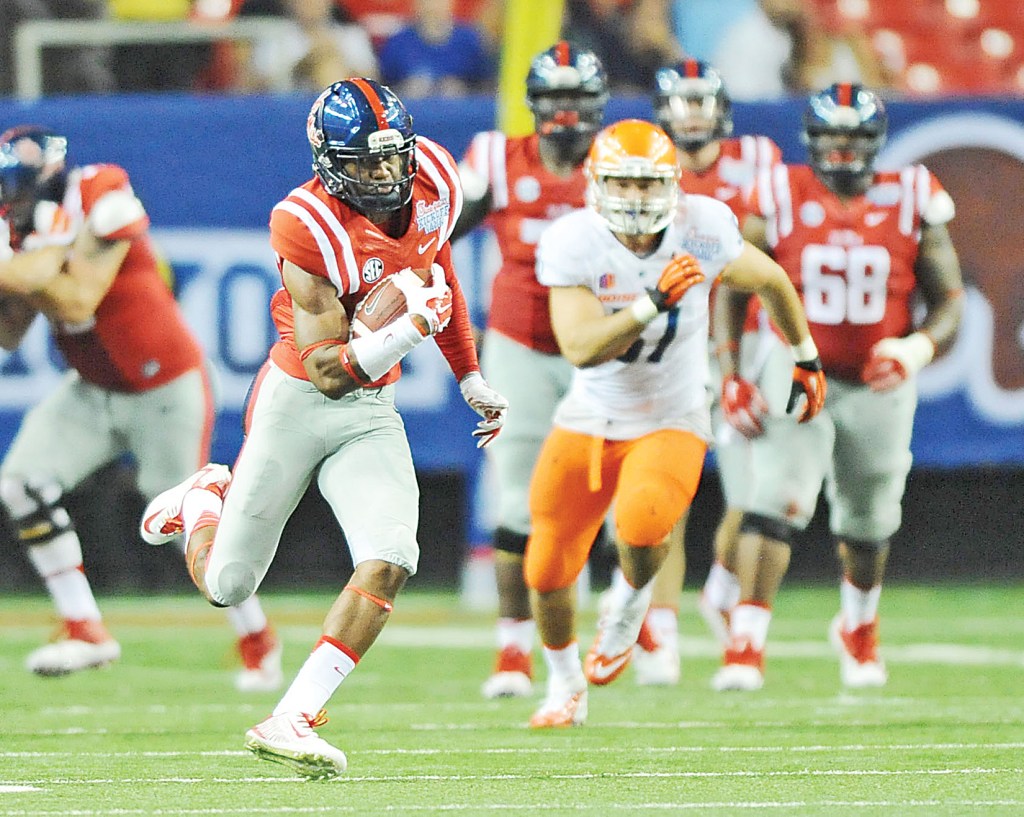 ATLANTA — As ugly as the start was for Ole Miss, the finish was equally as appealing.

The 18th-ranked Rebels sputtered on offense for much of the night, leaning heavily on the help of an opportunistic defense before finding a rhythm late to start the season with a 35-13 win over Boise State on Thursday in the Chick-fil-A Kickoff Game in the Georgia Dome.

A barrage of penalties along with three interceptions from quarterback Bo Wallace, who only needed a half to match the most picks he threw in a game all of last season, kept Ole Miss’ offense in neutral for three quarters. The Rebels pulled away once they cleaned it up.

Wallace connected with Laquon Treadwell, Quincy Adeboyejo and Cody Core for touchdowns on back-to-back-to-back fourth-quarter drives to help Ole Miss (1-0) turn a 7-6 lead into a comfortable victory. He finished 25 of 36 for 387 yards and four touchdowns.

“It was the first game, and I was trying to come out and do things that I shouldn’t have done,” Wallace said. “We just got it together in the second half and had a good one.”

Treadwell had seven catches for 105 yards while two of Core’s four grabs went for touchdowns. Core led all receivers with 110 yards. The late surge masked a running game that produced just 71 yards, 19 of which came on Mark Dodson’s touchdown scamper with 1 minute, 35 seconds left.

“We’ve got a lot to get cleaned up, but at the end of the day, we beat a good football team tonight,” Ole Miss coach Hugh Freeze said. “We’re excited to be going back 1-0.”

The defense was there from the start for the Rebels, who pressured Boise State’s Grant Hedrick into four interceptions and kept the Broncos (0-1) out of the end zone until Hedrick found running back Jay Ajayi from 9 yards out late in the fourth quarter.

The Broncos had chances to get there earlier, but Ole Miss stuffed Ajayi on three consecutive runs from inside the Rebels’ 1-yard line in the second quarter to force a 25-yard field goal. Boise State reached Ole Miss’ 23 on its second drive of the third quarter before the Rebels again forced a field goal to stay in front.

“We kept them out of the end zone, and they didn’t score until late in the third or fourth quarter,” defensive tackle Robert Nkemdiche said. “That just gave the defense more momentum to know that we were playing really good football.”

The Rebels’ offense didn’t have the same kind of opportunities early with 10 of the team’s 14 penalties coming in the first two quarters. Seven of those were false starts, halting numerous drives before they even started.

“We never could get any sync because we were behind the chains the whole time,” Freeze said. “I don’t know how many penalties on offense, but too many for sure.”

Wallace contributed to the offensive ineptitude, looking more like the quarterback who threw 17 interceptions in his first year as the starter in 2012 than the one who trimmed that total to 10 last year.

Wallace was picked on the first play of the Rebels’ second possession. He rebounded on the next drive to cap a nine-play, 80-yard scoring march with a 30-yard touchdown pass to Core to give Ole Miss a 7-0 lead with 57 seconds left in the first quarter.

But Tyler Gray intercepted Wallace in Boise State territory in the second quarter, which the Broncos turned into their first three points. Wallace’s third interception came on a diving grab by Darian Thompson in the back of the end zone.

Three interceptions of Hedrick, including a one-handed snag in the end zone by cornerback Senquez Golson, helped the Rebels take a 7-3 lead to the locker room.