COLUMN: Rebels can win lots of games with this version of Wallace 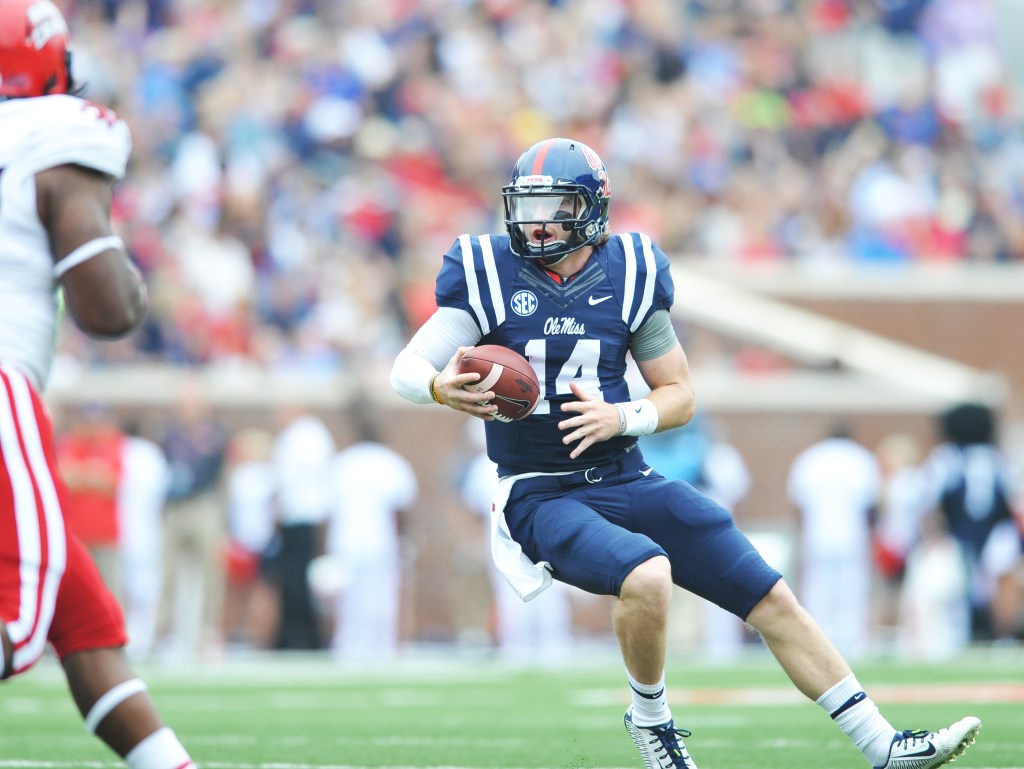 Ole Miss quarterback Bo Wallace (14) looks downfield during the Rebels' 56-15 win over Louisiana-Lafayette on Saturday at Vaught-Hemingway Stadium. Wallace has been responsible for just one turnover since the first half of the season opener against Boise State. (Bruce Newman)

You can blame Bo Wallace if you want. You’d be wrong.

Wallace got pressured late in the first half of the Rebels’ 56-15 beatdown of Louisiana-Lafayette on Saturday and anticipated where wideout Cody Core was going to be. But since Core wasn’t where he was supposed to be, Wallace’s pass was behind Core a bit and deflected into the hands of Lafayette’s Shaun Thomas.

It ended Wallace’s streak of seven consecutive quarters and 72 straight attempts without an interception.

Wallace has gained a reputation — and justifiably so — for being a charitable guy on the field. Wallace has been picked off 31 times in 29 career games, but his latest one could’ve easily been a completion.

“We blew a route, and it was a timing route,” Freeze continued to explain. “(Wallace) went to the right place. It should’ve been a completion.”

Wallace has frustrated Freeze and fans alike at times with his ability to look so good one minute and fall to the other end of the spectrum just as fast, a trend that continued in the first half against Boise State when the senior sandwiched his first three picks of the season around a perfectly placed 30-yard touchdown toss.

Wallace admitted he got greedy on some of those throws, trying to fit passes into tight quarters as he gauged just how strong his new and improved throwing shoulder was. Some of it, he said, was a matter of trying too hard to get his final go-around with the Rebels off to a good start.

But none of those excuses flew for a third-year starter. He acknowledged he had to start playing within the structure of an offense with plenty of pieces in place to help him do so.

Which is what exactly what he’s done since the second half started that Thursday night in the Georgia Dome against the Broncos.

Wallace is taking what defenses give him. He threw three fourth-quarter touchdowns against Boise State, one of which came on a quick slant to Core that Core turned into a 76-yard catch-and-run. Vanderbilt decided to use a lot of man against Ole Miss’ receivers with a high — really high — safety or two, and Wallace worked the middle of the field when his receivers beat the coverage and checked the ball down when they didn’t.

There were times when Wallace could’ve taken a chance against the ‘Dores, like when Laquon Treadwell drew one-on-one coverage in the end zone in the second quarter. But Wallace was late in spotting it, and instead of risking it — a throw he likely would’ve tried last season — he threw the ball away and lived to play another down on a drive that eventually ended in points in the 41-3 blowout.

The pick on Saturday was the Wallace’s lone blemish, if you want to call it that. He completed his first 14 passes and ended the half 20 of 24 for 290 yards and three touchdowns — both Ole Miss single-game passing records for a half — as part of a 316-yard, four-TD day. He’s completing a gaudy 80.5 percent (58 of 72) of his passes since that ugly first half in Atlanta.

It’s the way Ole Miss needs Wallace to play if it really wants to be a threat in the SEC West. The Rebels’ ground game is going to have to be more productive against tougher competition to relieve some of the pressure, but the defense is good enough to keep Ole Miss in every game.

But the bottom line is you’re not going to win games without a quarterback, and if this version of Ole Miss’ signal caller keeps showing up, the Rebels will have a chance to win a lot of them.