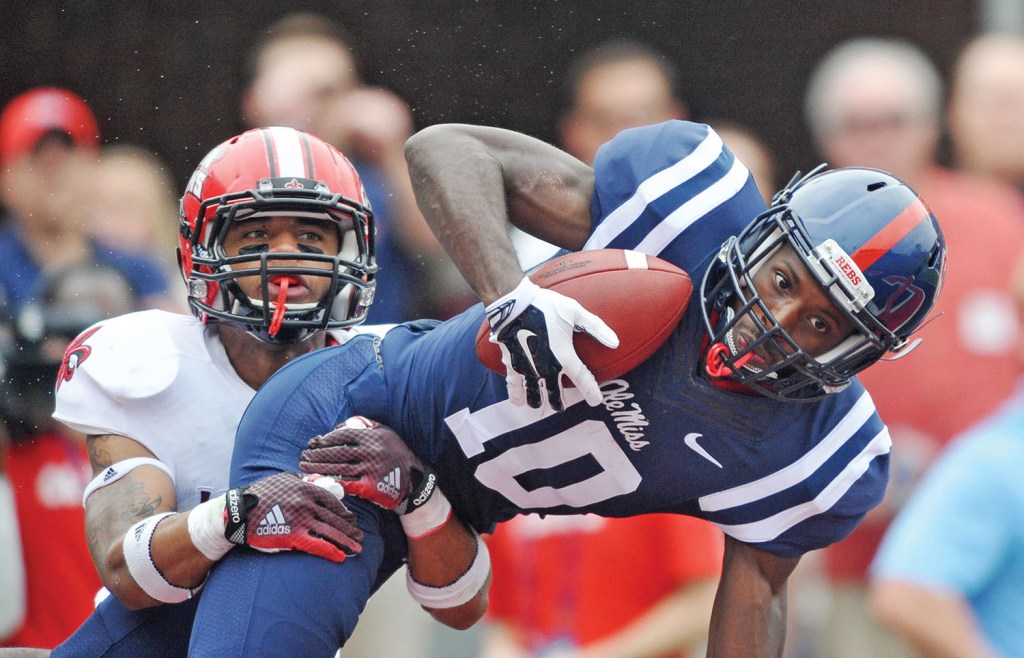 It’s getting difficult not to think about what might be when Alabama visits Oxford in three weeks.

The second-ranked Tide has to get past Florida next weekend at home, but Alabama and No. 14 Ole Miss seem destined for a matchup of SEC unbeatens on Oct. 4, especially after the Rebels’ 56-15 dismantling of Louisiana-Lafayette on Saturday afternoon in front of 60,937 fans at Vaught-Hemingway Stadium.

“We’ve got a lot of work to do in order to get ready for those games,” cornerback Senquez Golson said. “We’re just focused on our bye week, getting better and letting Memphis roll in here and see what happens.”

Bo Wallace couldn’t have been much better against the Ragin’ Cajuns (1-2). Ole Miss’ senior quarterback threw for 316 yards and four touchdowns, moving into second place in school history with 49 scoring tosses and tying Eli Manning for the school record with his 10th career 300-yard game.

Wallace completed his first 14 passes, two of which went for touchdowns to Jaylen Walton and Vince Sanders sandwiched around I’Tavius Mathers’ 56-yard touchdown run as the Rebels ran out to a 21-0 lead and never looked back. He was 23 of 28 in a little more than two quarters of work.

“I’m playing how I expect myself to play,” Wallace said. “I just have to continue it each week.”

Sanders hauled in a pair of touchdowns and finished with eight catches for 125 yards, both career highs for the senior. Laquon Treadwell caught four passes for 48 yards while one of Core’s four grabs was a one-handed snag from 13 yards out in the back of the end zone to put Ole Miss up 35-6 with 10 minutes, 30 seconds left in the third quarter.

The defense put up points for the second straight week when Golson broke in front of Terrance Broadway’s pass on Louisiana-Lafayette’s second possession of the third quarter and returned it 59 yards for a score to push the lead to 49-6. Golson had two of the Rebels’ three picks, which ran Ole Miss’ season total to eight.

Ole Miss forced four turnovers in all and held the Ragin’ Cajuns to 322 total yards. Lafayette scored its only touchdown on Alonzo Harris’ 8-yard run with 1:04 left in the third quarter.

“Just basically just being in the right spot,” Golson said. “We’re listening to the coaches on the sideline as far as the adjustments, and we just did what we had to do.”

Said Lafayette coach Mark Hudspeth, “On the road against an SEC team, there is no hope with four turnovers.”

Walton ripped off the Rebels’ longest run of the season with a 71-yard touchdown scamper in the third quarter, and tight end turned Wildcat quarterback Jeremy Liggins scored the first touchdown of his Ole Miss career on a 2-yard run in the fourth.

“I’m real, real happy we went out and took control of the game and pretty much kept control of it,” Ole Miss coach Hugh Freeze said.