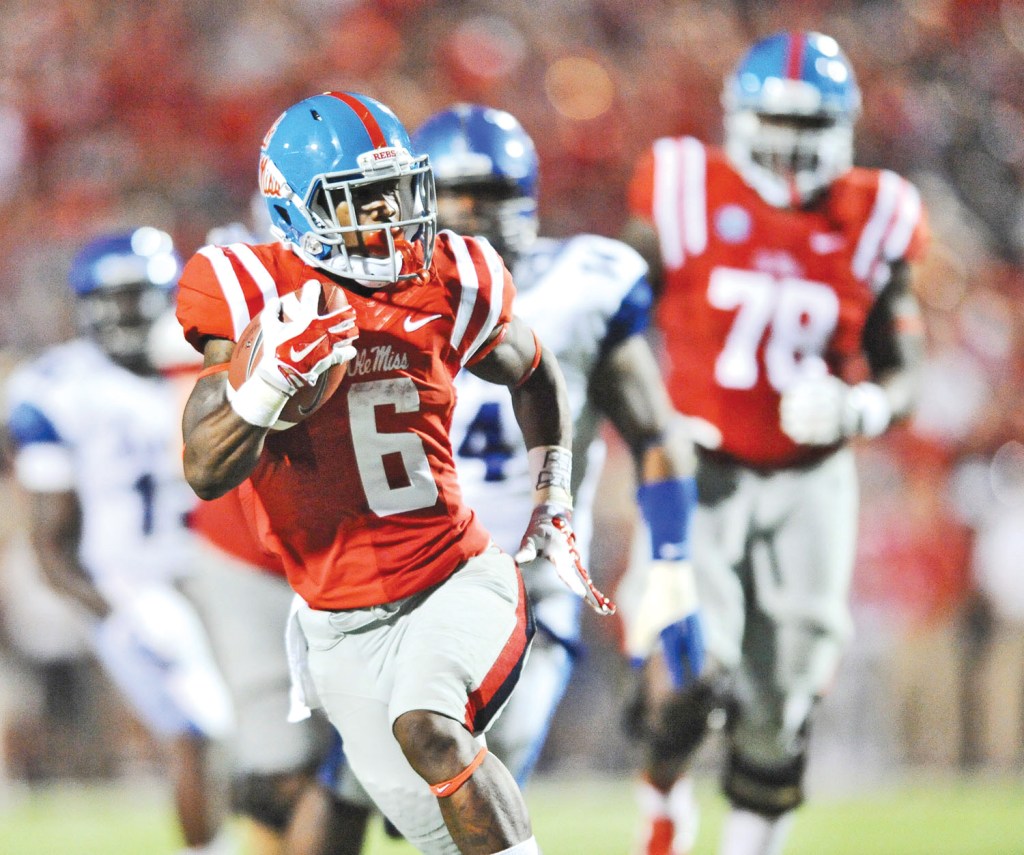 Ole Miss running back Jaylen Walton (6) runs 23 yards for a touchdown against Memphis at Vaught-Hemingway Stadium on Saturday. Walton led the Rebels on the ground with 84 yards on 10 carries. Ole Miss won 24-3. (Bruce Newman)

Memphis put a landmine in front of Ole Miss’ path to a potential top-10 showdown with Alabama next weekend. Ole Miss tiptoed around it.

The 10th-ranked Rebels committed four turnovers and found themselves clinging to a 7-point lead early in the fourth quarter before finding the end zone twice in the final minutes to pull away for a 24-3 victory Saturday night in front of a crowd of 61,291 at Vaught-Hemingway Stadium.

The Rebels created some separation when running back Jaylen Walton ripped off a 23-yard touchdown run one play after Issac Gross recovered a Memphis fumble, and Wallace’s final scoring toss went to Laquon Treadwell from 17 yards out with 1:09 remaining to ensure Ole Miss’ first 4-0 start since 1970.

Now the attention turns to the clash with the third-ranked Crimson Tide in a game that will be the first top-10 matchup in the history of Vaught-Hemingway Stadium should Ole Miss hold its spot in this week’s Associated Press poll.

“It’s good to play a four-quarter game against a good football team and get a win,” Ole Miss coach Hugh Freeze said. “Now we can talk all you want about next week.”

Wallace was 22 of 37 for 248 yards with five of those completions going to Treadwell for a career-high 123 yards and two scores. Walton led the ground game with 78 yards on 10 carries.

The defense didn’t need much help.

Ole Miss didn’t allow a Tiger offense averaging 44.7 points per game much room to do anything, holding Memphis (2-2) to 13 first downs and 104 yards of offense. Quarterback Paxton Lynch went 13 of 31 for 81 yards and was picked off once, and no Tiger back had more than 29 yards.

Opponents have only found the end zone twice against Ole Miss this season.

“Flying around, doing our job, being in the right place and making the right plays that we’re supposed to make,” linebacker Denzel Nkemdiche said. “Playing as one.”

Wallace found a wide-open Treadwell for a 63-yard catch-and-run score on the Rebels’ fifth play from scrimmage for a 7-0 lead less than four minutes in, but the rest of the first-half highlights belonged to the defense.

The Rebels swarmed any Memphis player with the ball, limiting the Tigers to minus-4 yards rushing and 1.8 yards per play in the first two quarters. Memphis had 57 yards before halftime, 42 of them coming on Paxton Lynch’s completion to Keiwone Malone to set up the Tigers’ only points of the game.

Ole Miss finished with 231 yards in the first 30 minutes, but miscues kept the Rebels from adding points. Wallace threw both of his picks in the red zone, and Andrew Fletcher missed on a 40-yard field goal attempt early in the second quarter.

“I tell myself to stay even-keel,” Wallace said. “Even when I get frustrated, I tell myself, ‘All right, back down, go out and play ball.’ I wasn’t trying to do too much this game. I was just trying to run the offense. Just a couple of bad decisions.”