Ole Miss rallies to down No. 3 Alabama 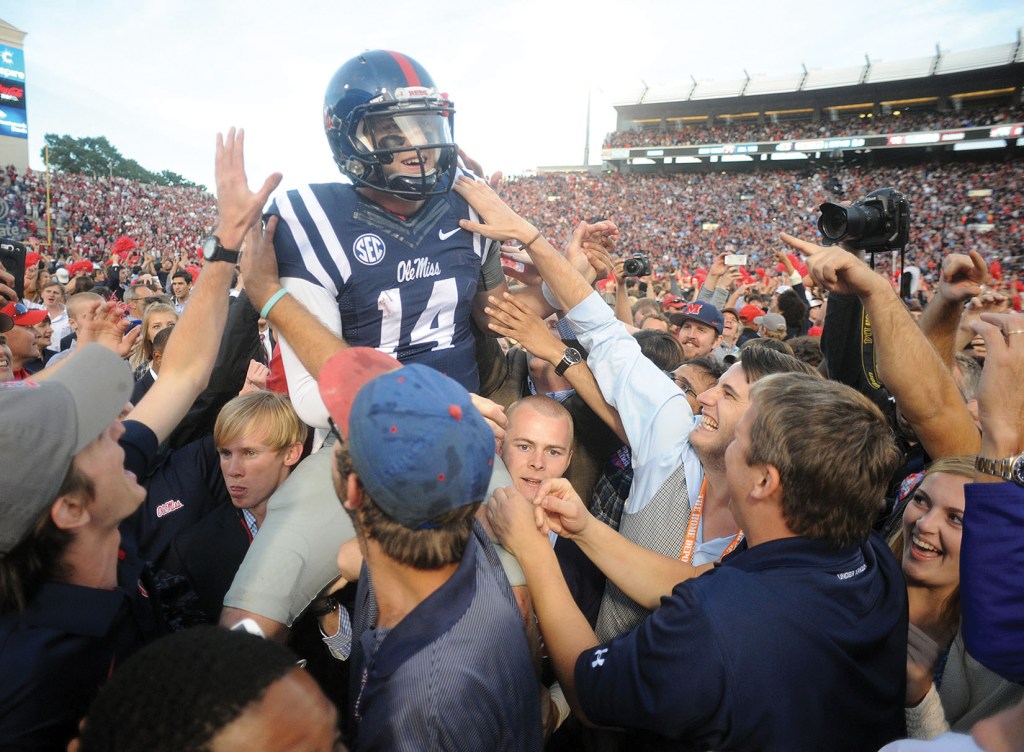 College football’s first four-team playoff is still three months away, but Ole Miss is officially in the conversation.

The Rebels put themselves there by exorcising some demons.

The 11th-ranked Rebels stayed patient against Alabama’s always stout defense and broke through late, scoring three second-half touchdowns to erase a double-digit deficit and upset the third-ranked Crimson Tide with a 23-17 victory in front of a sellout crowd of 61,826 at Vaught Hemingway Stadium on Saturday.

The win snapped a 10-game losing streak to Alabama and moved the Rebels to 5-0 for the first time since 1962, the last time Ole Miss won a national championship.

“(Alabama) has been the gold standard for this conference for a long time,” Ole Miss coach Hugh Freeze said. “It’s a huge win for our program and our fans. It’s been a tremendous day. … Our kids fought their guts out.”

Quarterback Bo Wallace finished 18 of 31 for 251 yards and tossed all three of his touchdowns after halftime as Ole Miss (5-0, 2-0 Southeastern Conference) took its first lead since 3-0 with 2:54 left. It was up to the defense, though, to make sure the Rebels hung on in front of the fourth-largest crowd in stadium history.

Alabama (4-1, 1-1 SEC) drove to Ole Miss’ 22-yard line in five plays. After a holding call, Tide quarterback Blake Sims targeted O.J. Howard in the end zone, but cornerback Senquez Golson hauled in the pass over the 6-foot-6 Howard and got a foot inbounds for the interception with 37 seconds left.

A kneel out of the victory formation later, fans poured out of the stands and rushed the field to celebrate a win capping a week that saw No. 2 Oregon, No. 4 Oklahoma and No. 6 Texas A&M go down.

“I just did my job, was in the right spot and made a good play,” Golson said. “The feeling is indescribable right now.” 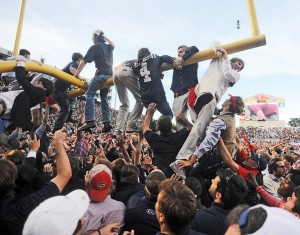 Fans hang on the goalpost while celebrating Ole Miss’ win over Alabama on Saturday at Vaught-Hemingway Stadium. (Bruce Newman)

Alabama finished with 396 yards but couldn’t produce the same big plays they had against their first four opponents. Running back T.J. Yeldon had 123 yards, though his longest run went for 22 yards, and the Rebel secondary kept receiver Amari Cooper in check. Cooper, who came in averaging 167 yards per game, finished with just 91 yards on nine catches.

But Alabama started the second half with a 14-3 lead thanks to Sims’ 1-yard touchdown run with 3:44 left before halftime and Cyrus Jones’ strip-and-score of I’Tavius Mathers three minutes later.

Ole Miss’ offense then caught up.

But Wallace came back two possessions later to find Vince Sanders all alone for a 34-yard score to tie it at 17 with 5:29 to play.

Channing Ward knocked the ball away from Christion Jones on the ensuing kickoff, and Kailo Moore pounced on the loose ball to put the Rebels 31 yards away from a go-ahead score. Ole Miss grabbed it five plays later on Wallace’s 10-yard touchdown toss to Jaylen Walton before the defense preserved it.

“It was a screen, and Jaylen just leaked out,” Wallace said. “When I threw it, I was like, ‘Please get over this guy.’ Jaylen made a great play on it.”