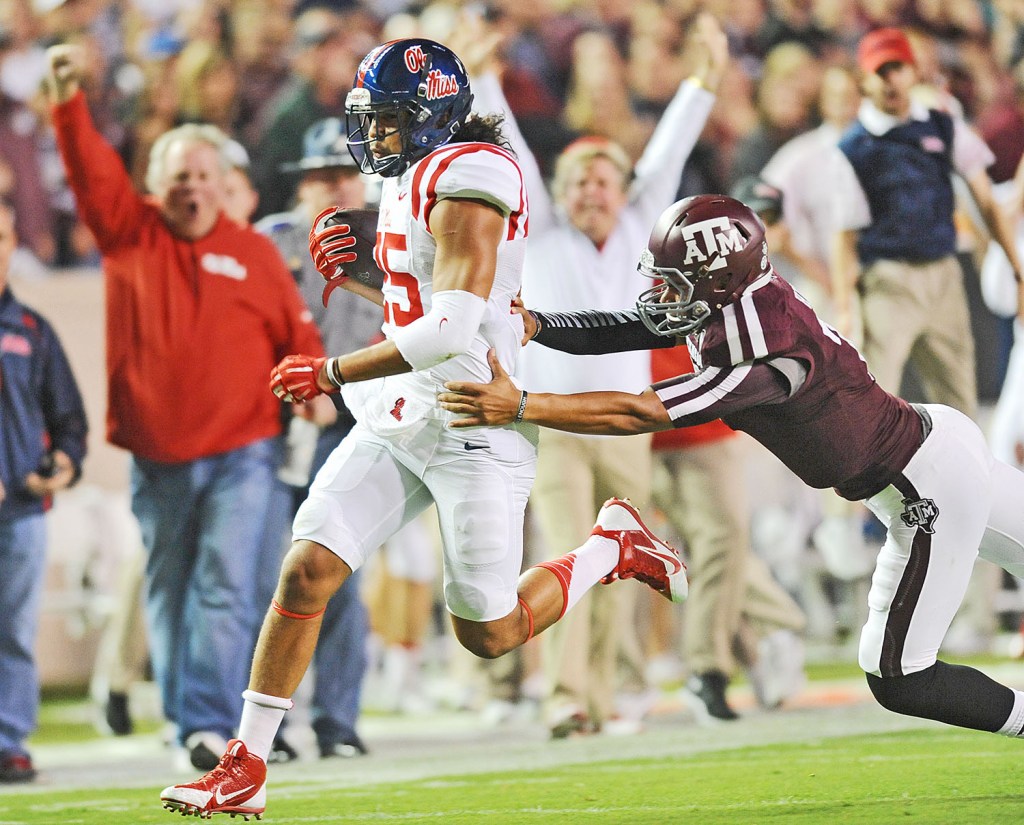 COLLEGE STATION, Texas — So much for a hangover.

Lots of folks wondered how Ole Miss would respond to such an emotional high after knocking off Alabama for the first time in 10 years (and what seemed to many like forever). Could Ole Miss handle it? Would the Rebels be able to quickly refocus for the next landmine set in front of them in the brutal SEC West?

Ole Miss not only turned the page, they slammed the book on Texas A&M.

The Aggies entered the contest leading the SEC by a wide margin in scoring (47.8 points per game), total offense (583.2 yards) and passing offense (395.2 yards), but they all finished runner-up to Ole Miss’ defense.

The Rebels swarmed anybody trying to run (54 rushing yards), and they made Kenny Trill, the popular nickname for A&M quarterback Kenny Hill, look more like Kenny Ill. Ole Miss flustered and frustrated the Aggies all night, forcing three turnovers and allowing an offense that averages nearly seven touchdowns each time out to find the end zone just three times.

And Ole Miss’ offense continued to do what everybody does against A&M’s defense — rattle off yards and points in chunks. The Rebels ripped off 6.3 yards per play and had a 35-7 lead before A&M’s offense found any life, essentially putting the game away with an entire quarter to play.

How did Ole Miss do it? Against that offense? In that stadium?

“All that matters is to know that we’re going to ignore everything outside of our locker room,” defensive tackle Robert Nkemdiche said minutes after the win. “It didn’t matter because we knew (the Alabama win) wasn’t a fluke. We knew that we were ready for Texas A&M.”

That’s obvious now, but a number of players admitted earlier in the week that it was difficult to move on from the euphoria in the days following the victory over the Crimson Tide with classmates patting them on the back and television and sports talk radio shows telling them how good they were.

Ole Miss went out and displayed for another national television audience that this year’s version of the Rebels is different. Ole Miss showed maturity with its ability to leave the past there and focus on the next challenge.

Taking that approach becomes even more important now considering where Ole Miss is positioned entering the second half of the season.

Ole Miss and Mississippi State are the only two undefeated teams left standing in the nation’s premier conference, and with their highest ranking in 50 years, the Rebels are a legitimate national title contender. But plenty of those potential landmines are still firmly planted.

The Rebels have a trip to LSU looming later this month before getting their shot against a top-10 Auburn team on Nov. 1. The league slate wraps up with a trip to take on a new and improved Arkansas squad on Nov. 22 and what’s setting up to be an epic Egg Bowl clash with the third-ranked Bulldogs on Nov. 29.

But up next is Tennessee this Saturday, which will come to Oxford after playing No. 11 Oklahoma in Norman and giving No. 13 Georgia — with Todd Gurley — all it wanted in a 35-32 loss in Athens.

For a team that has championship aspirations for the first time in a long time, it’s the only approach to take.