COLUMN: Best D in the land? Rebels making their case 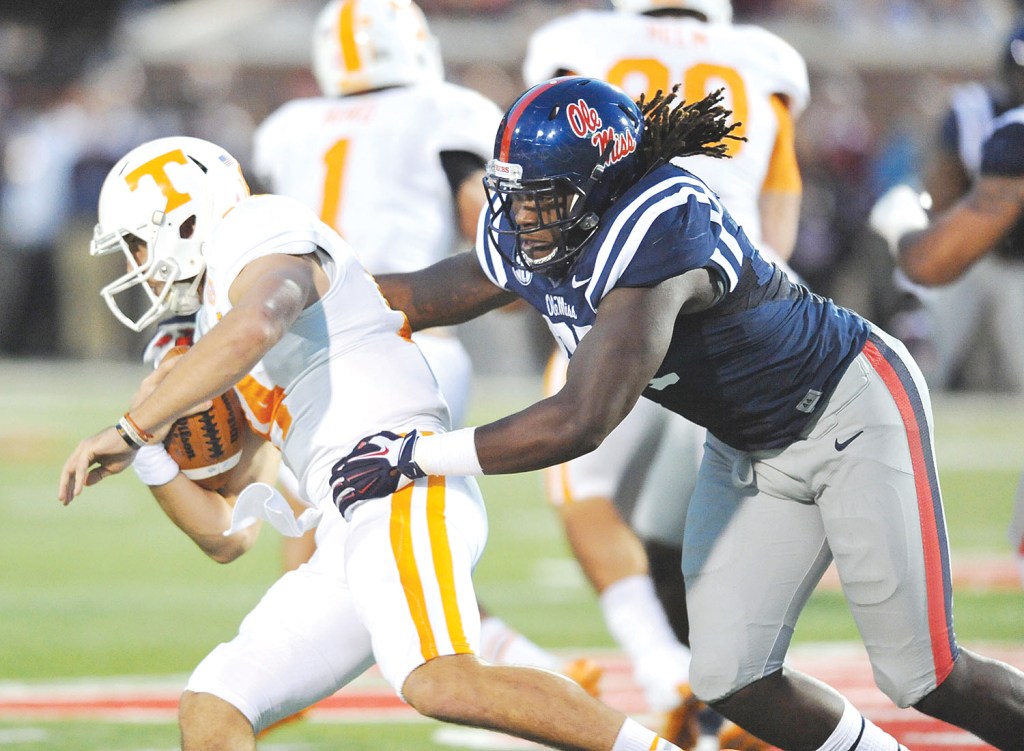 At a certain point, you had to feel sorry for Tennessee.

The Volunteers’ offense hasn’t exactly been a well-oiled machine this season, but it hit a whole new level of ineptitude against Ole Miss on Saturday night at Vaught-Hemingway Stadium.

The running game was non-existent. Literally. The Vols didn’t finish with a single rushing yard.

As a result, Ole Miss sat back and waited for Justin Worley to try to hit one of his big receivers down the field, but he rarely had time to find them under constant pressure from Marquis Haynes and company up front.

The Southeastern Conference’s fourth-best passing offense was muzzled to 191 yards, and the Rebels ran their nation-leading interception tally to 15 by picking Worley three times. Tennessee averaged 3.1 yards a play, was the victim of seven sacks and never found the end zone.

At a certain point, it didn’t matter what Tennessee tried to do. It wasn’t going to work. At least not when it mattered.

It’s becoming a suffocating theme for any offense lining up against this Ole Miss defense.

Remember the previous week? That Texas A&M offense that was ranked top 5 nationally in putting up points (47.8 per game) and yards (583) going into that game?

The Aggies had nothing at the half, the first time they had ever been shut out through the first two quarters under Kevin Sumlin, and saw their scoring average drop 13 points once Ole Miss got through with them.

How about the week before that? That new and improved Alabama offense under first-year coordinator Lane Kiffin didn’t look so new and improved against Ole Miss. The Crimson Tide needed a scoop and score from their defense just to crack double digits.

Ole Miss took the field seven days earlier and held Memphis to 104 yards, the lowest total for any opponent in the last six years.

So on and so forth.

As of late Saturday night, Ole Miss was the nation’s hardest team to score against (10.6 points per game) and is ranked in the top 25 in pass, rush and total defense. Ole Miss falls in the top four in the SEC in all of those categories, making the Rebels the only team in the league that can say that.

The Rebels have allowed three points in the first quarter all season, squashing any ideas opponents have of creating early momentum. Playing a mean game of keepaway has helped.

Ole Miss leads the SEC with 20 takeaways and has been one of the country’s best at turning them into points. The defense has scored four touchdowns. It’s allowed six.

Ole Miss doesn’t have the biggest defense you’ll see, but good luck finding one that’s faster. The Rebels don’t stay blocked for long (12 tackles for loss against the Vols), they get to the ball in a hurry, and there’s plenty of NFL talent to go around.

Robert Nkemdiche and Tony Conner are future first-round draft picks. Cody Prewitt and Senquez Golson will play on Sundays, too. Plenty of other guys — C.J. Johnson, Mike Hilton and Fadol Brown, just to name a few — will also get a shot.

I filled this space after the opener against Boise State with a bunch of words about how the defense looked the part thanks to that kind of talent and a little more depth, though it was going to be difficult to tell exactly how much better this year’s unit would be until it faced faster, more explosive offenses.

Now we know. It’s a lot better. It’s the best in the SEC.

And it might just be the best the country has to offer.