Ole Miss defense clamps down on Vols in rout 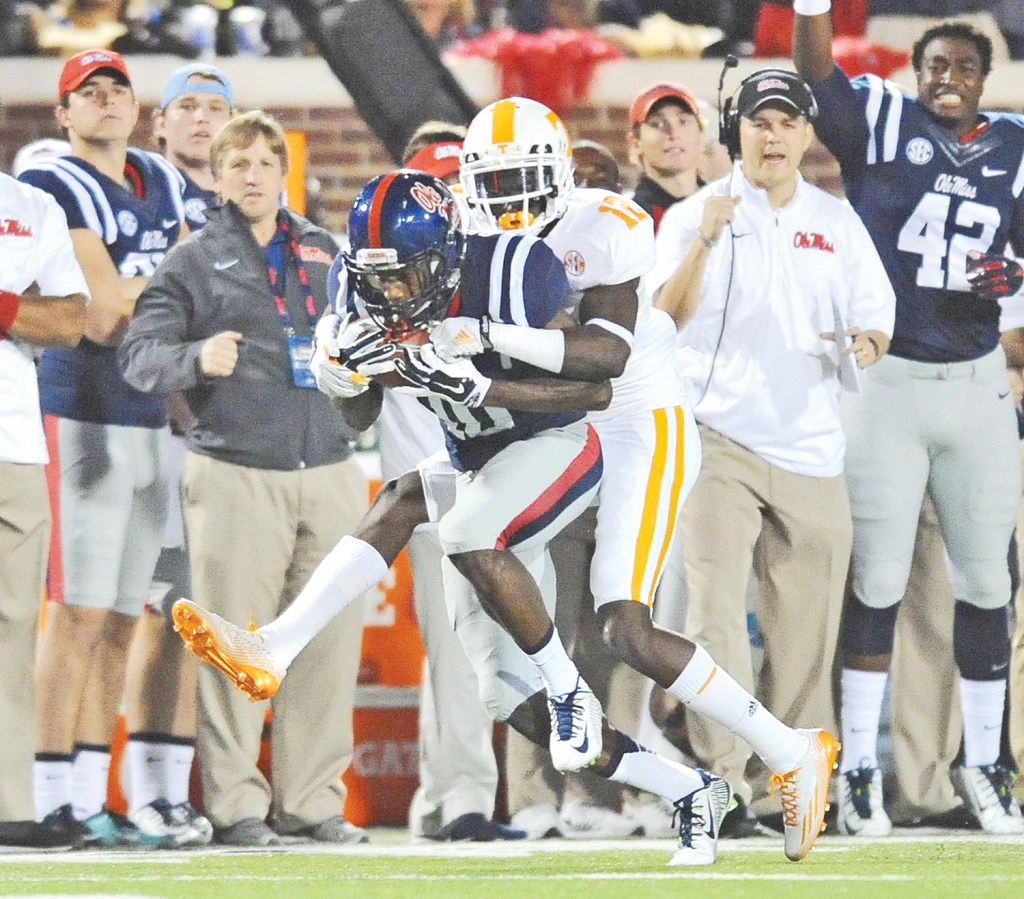 Ole Miss’ offense took a while to get going Saturday night. Not that it mattered a whole lot.

The third-ranked Rebels’ defense turned in another dominant performance, keeping Ole Miss close until the offense found its footing and suffocating Tennessee from start to finish in a 34-3 victory in front of 62,081 fans at Vaught-Hemingway Stadium.

Ole Miss (7-0, 4-0 Southeastern Conference) didn’t get on the scoreboard until late in the second quarter, but the Rebels didn’t need much. Tennessee (3-4, 0-3) finished with 191 yards, all of them coming through the air. The Rebels lived in the Vols’ backfield, sacking Tennessee quarterback Justin Worley seven times and recording 12 tackles for loss.

The pressure got to Worley, who completed 19 of his 34 attempts but was intercepted three times. Tennessee was harassed into four turnovers in all, and the Vols became the third team that’s failed to reach the end zone against Ole Miss this season.

“We felt pretty confident that we would get a chance to rush the quarterback if we could make them one-dimensional,” said defensive end C.J. Johnson, who had one of those sacks. “Tonight (the defensive linemen), they teed off.”

But Tennessee led 3-0 after a quarter thanks to a defense that made things equally as tough for the Rebels early on. Ole Miss collected 46 yards on its first 20 plays and didn’t pick up a first down until its fourth possession.

The SEC’s fourth-ranked pass defense made life difficult for Bo Wallace, who completed just 13 of his 28 attempts for 199 yards and two touchdowns. But the Rebels used quality instead of quantity through the air.

Five of Wallace’s completions went for at least 14 yards, and his 39-yard pass to Vince Sanders with 5 minutes, 8 seconds left in the second quarter erased Tennessee’s lead. Cornerback Senquez Golson got the ball back for the offense with his first of two interceptions, and the Rebels turned it into points when Jaylen Walton capped a five-play, 35-yard drive with a 7-yard touchdown run to go up 14-3 at the break.

“We just started getting yards on first down,” Wallace said. “On first down, they were killing us, and it was putting us behind the chains. We just weren’t able to overcome that at first.

“When we turned it on, I thought we did a really good job.”

Gary Wunderlich added to the lead with a 34-yard field goal with 2:04 left in the third quarter, and the Rebels used Tennessee’s final turnover to salt the game away. Marquis Haynes recovered Evan Berry’s fumble on the ensuing kickoff, and tight end Evan Engram made an acrobatic over-the-shoulder snag on the next play for a 28-yard touchdown to put the Rebels in control.

Ole Miss accumulated 209 of its 383 total yards in the final two quarters. Sanders had four catches for 108 yards while Walton led the Rebels on the ground with 60 yards on 10 carries. Mark Dodson had an 8-yard touchdown run in the fourth quarter.

It was plenty for a defense that’s giving up just 10.6 points each time out.

Said Ole Miss coach Hugh Freeze, “If you look at stats, you’ve got to figure if we can score 17 to the mid-20s, then we’ve got a chance to win a lot of games with the way they’re playing.”