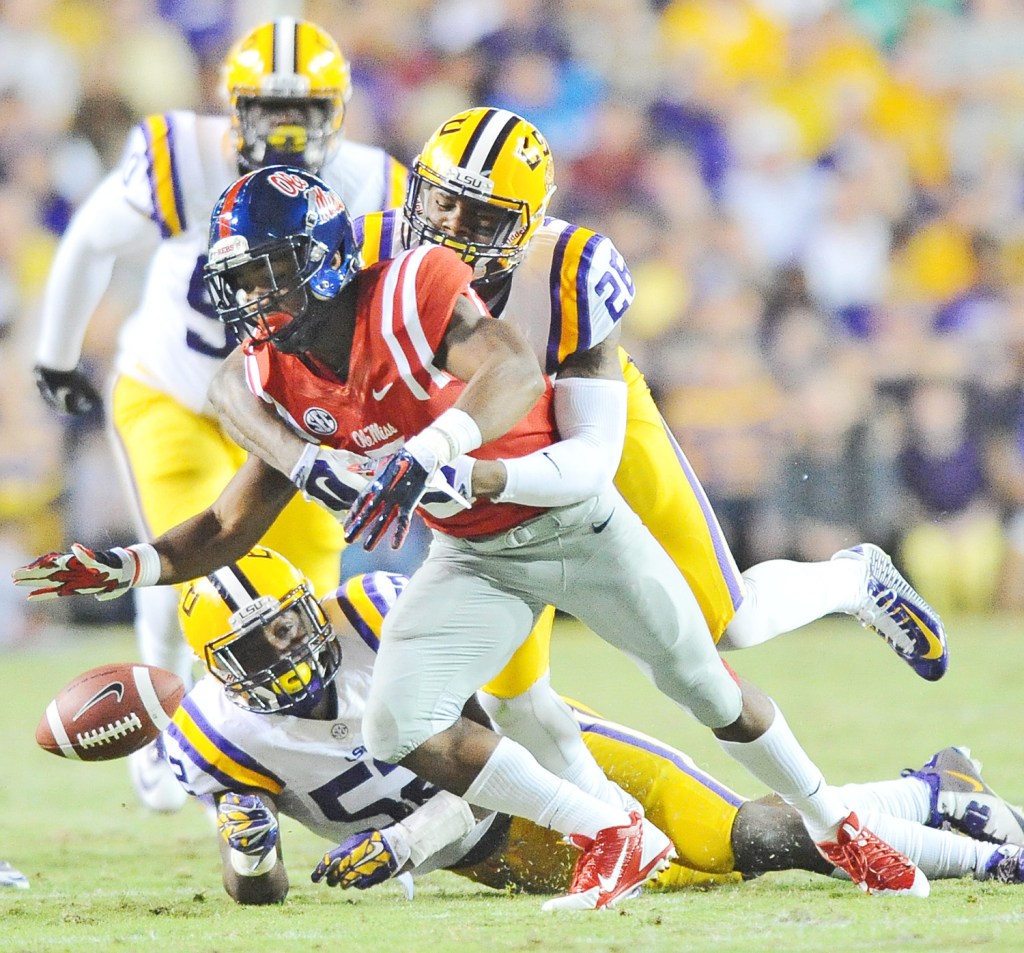 Ole Miss running back I'Tavius Mathers (5) fumbles as he is hit by LSU's Ronald Martin (26) and Kendell Beckwith (52) at Tiger Stadium in Baton Rouge, Louisiana, on Saturday.

BATON ROUGE, La. — Were you surprised by Ole Miss’ loss to LSU? Considering how the Tigers have looked at times this season, that’s fair.

LSU looked like a team destined for the bottom of the SEC standings in the first two months of the season, getting pummeled by Auburn and needing a last-second field goal to get past a horrendous Florida team. The defense, which has lost a ridiculous number of players to the NFL in recent seasons, struggled to stop everybody, and the task of replacing quarterback Zach Mettenberger with sophomore Anthony Jennings and true freshman Brandon Harris has been ugly.

But this is LSU we’re talking about, and the Tigers reminded everyone Saturday night that there’s still plenty of talent in Baton Rouge.

Jennings has taken hold of the quarterback job, but it didn’t really matter who was under center against the Rebels. The Tigers’ massive offensive line, headlined by future NFL draft picks La’El Collins and Vadal Alexander, mauled Ole Miss’ quicker, yet smaller, defensive front.

Most of the holes were opened for Leonard Fournette, who’s going to be a high draft pick in his own right.

Even when there wasn’t room to run, the 6-foot-1, 230-pound Fournette, who was playing high school ball this time a year ago, made his own, plowing, juking and spinning his way to a game-high 113 yards.

When all the grass settled, LSU had rolled up 264 yards on the ground, the first time the SEC’s second-ranked run defense had allowed an opponent to reach the 200-yard mark this season. The only yards that came through the air on LSU’s 13-play, game-winning drive in the fourth quarter was Jennings’ 3-yard touchdown toss.

The Tigers weren’t good enough to hang with Auburn or Mississippi State earlier this season, but LSU was more than capable Saturday of handling a team that already knocked off No. 4 Alabama and Texas A&M.

LSU’s win leaves Mississippi State as the SEC’s last unbeaten team. All the SEC West teams’ 12 combined losses have come against league foes. In the East, only three losses have come outside the conference.

Welcome to the new-look SEC, where the cannibalism is in full force.

A loss to a top 25 LSU team in its backyard at night isn’t the end of Ole Miss’ championships dreams, but the margin for error just shrank. With a schedule with a bunch of meat still on it yet so many possible carnivores waiting, the focus has to be channeled week by week.

Up next is No. 5 Auburn at home, a breather against Presbyterian and then an Arkansas team that’s eerily similar to LSU in its ability to bloody opponents’ noses on the ground. Get through those, and there’s another chance to improve the postseason resume against the top-ranked Bulldogs.

That’s all easier said than done, but it’s the reality staring Ole Miss in the face if the Rebels want to get to Atlanta in early December. It’s life in the SEC.

Time to eat or get eaten.