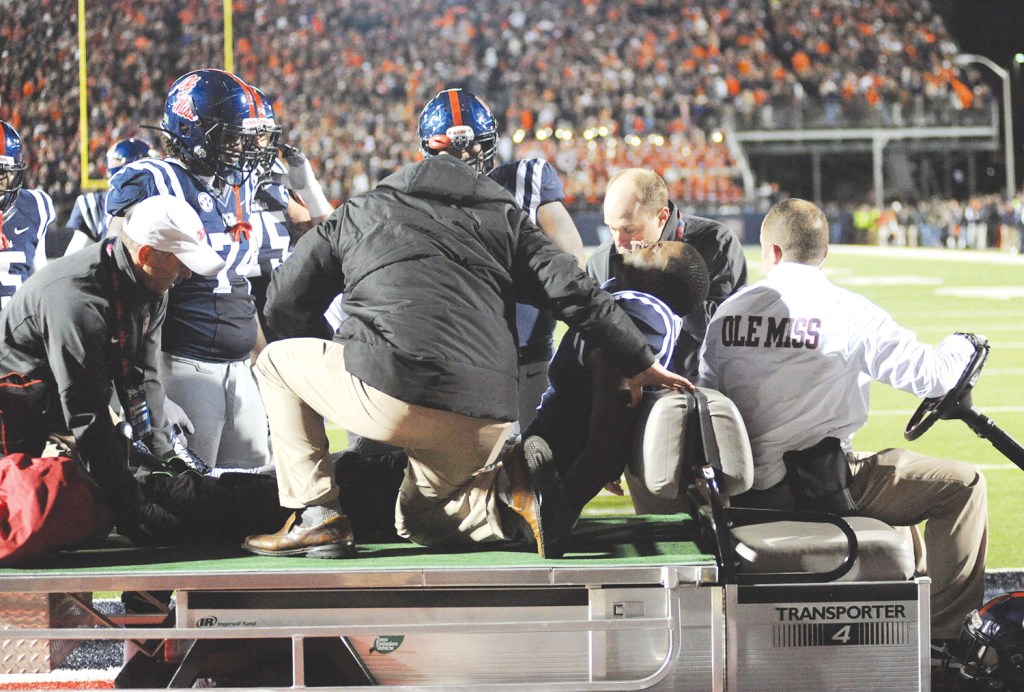 Ole Miss wide receiver Laquon Treadwell (1) is taken off the field after being injured against Auburn at Vaught-Hemingway Stadium on Saturday. Auburn won 35-31. (Bruce Newman)

Ole Miss was so close. Now the Rebels are far away.

If you can think of worse way Saturday night’s game against Auburn could’ve ended for Ole Miss, I’m all ears.

The Rebels were already without All-American left tackle Laremy Tunsil, who practiced all week and went through warmups with a bum shoulder but never played. Center Ben Still really shouldn’t have played after not practicing most of the week with a sprained knee, but Tunsil’s injury made it a necessity for Still to “gut it out,” as head coach Hugh Freeze called it.

But there Ole Miss was, going up and down the field and blow for blow with the fourth-ranked team in the country. The Rebels’ defense was carved up by Gus Malzahn’s bevy of athletes, but the offense did some carving of its own as quarterback Bo Wallace rebounded from back-to-back games completing less than 50 percent of his passes to go 28 of 40 for 362 yards.

His final completion to Laquon Treadwell looked like it would put the Rebels up for good and keep them alive in the chase for one of the four spots in the inaugural College Football Playoff. Wallace dumped a screen off to his uber-talented wideout, who broke tackle after tackle as he made his way to the end zone.

But the play had a forgettable ending.

Treadwell’s leg gave way to an awkward tackle by Auburn linebacker Kris Frost, he lost the ball on the way to the ground, and Ole Miss lost the game and a future first-round NFL draft pick at the same time. Freeze confirmed afterward that Treadwell, who was having a career night with 10 catches for more than 100 yards, fractured his ankle, which means he’s done for the season.

“He was really upset,” Wallace said as he fought back tears. “It was tough to see.”

A night filled with so much promise was capped with sheer agony. From jubilation to frustration. From contender to outsider.

“It was quiet,” cornerback Senquez Golson said of the mood in the locker room afterward. “A lot of questions.”

This isn’t the first bout of adversity Freeze has dealt with at Ole Miss. He took over a Dumpster fire of a program in 2012. He saw his first two teams take on the giants of the nation’s toughest conference with rosters that featured little talent and less depth.

But this week will be the toughest on the job for Freeze during his three short years in Oxford.

As much work as he’s put in to improve the talent and restock the depth chart to make the Rebels nationally relevant, the hopes of getting to Atlanta and playing for a national title have almost surely been dashed. The Rebels have two losses and are looking up at Auburn, Alabama and unbeaten Mississippi State in the SEC West standings and would need absolute chaos to ensue to even get back in the race.

And that idea of an Egg Bowl matchup to decide which team goes to the SEC Championship Game? That’s just a dream now.

Ole Miss has a breather against Presbyterian this week before a trip to Arkansas precedes Mississippi State’s visit to Oxford, but after so much energy spent on consecutive heart-stopping losses, how do the Rebels get back up? What’s left to play for?

“If you would of told us we would be here being relevant in who decides the SEC West and a chance to go play in bowl game maybe around New Year’s Day or New Year’s Eve, we all would’ve signed up for it,” Freeze said. “But that certainly doesn’t help them tonight.”

Now Freeze has got to help his players move on and get through the rest of the season.