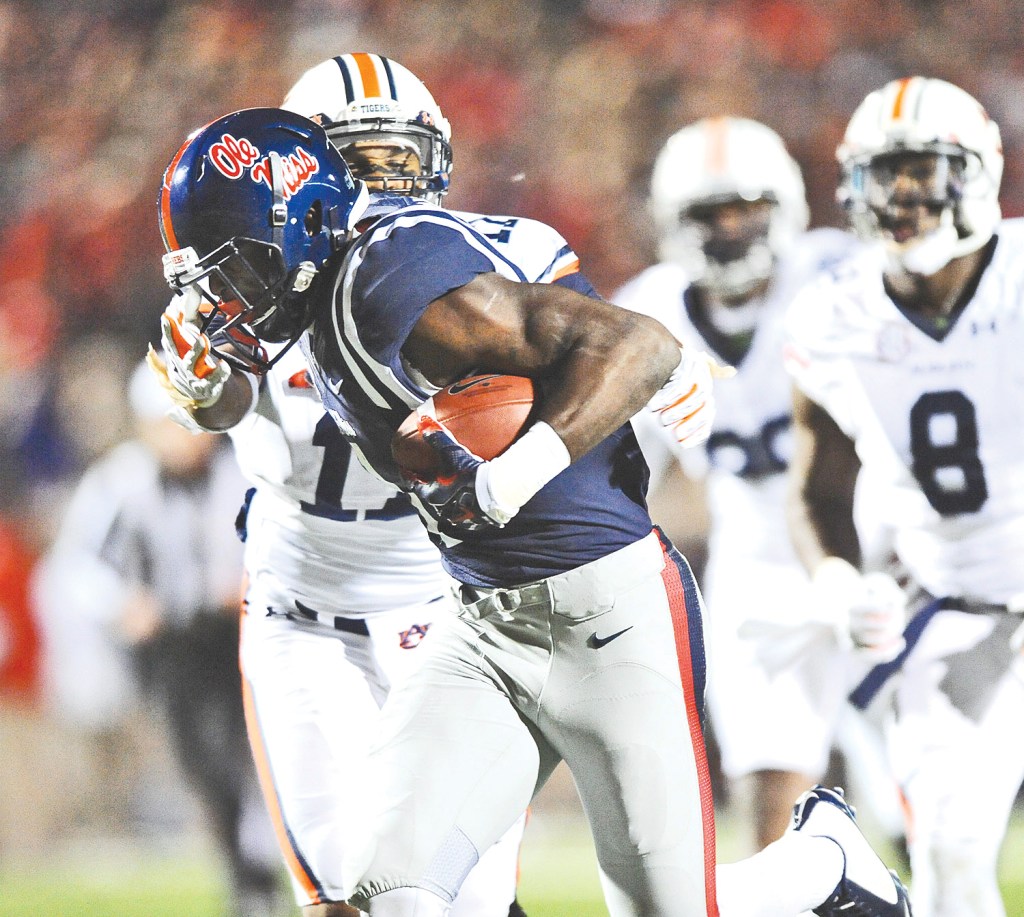 Laquon Treadwell got 19 yards. He needed 20.

Ole Miss’ sophomore wideout caught his final pass of the night, weaved his way through Auburn’s defense and fought off defenders on his way toward the end zone. But Kris Frost caught up to jar the ball loose from behind, and Auburn’s Cassanova McKinzy recovered in the end zone with 1 minute, 30 seconds left.

The recovery preserved a 35-31 victory for the fourth-ranked Tigers in a wild Southeastern Conference Western Division shootout in front of 62,090 at Vaught-Hemingway Stadium on Saturday night.

The play cost No. 7 Ole Miss (7-2, 4-2 SEC) more than a win as Treadwell’s left leg got caught under Frost and left him writhing in pain afterward. His leg was put in a cast, and Treadwell, who was in tears, was carted off the field with what head coach Hugh Freeze said was “definitely a fracture.”

Ole Miss used all three timeouts after three straight runs from Auburn (7-1, 4-1) and got the ball back one last time, but then some trickery from the Rebels was snuffed out by Auburn’s defense on the final play of the game, sending the Tigers’ players onto the field in celebration and delivering what might be the knockout punch to Ole Miss’ chances of being a part of the first-ever College Football Playoff.

“I’m so proud of our kids and the way they fought through injuries, difficulty and adversity,” Freeze said. “They stared it in the face and had a chance to win a huge football game tonight. Didn’t get the break that we needed to win it.”

The turnover was a rare break for either team, particularly the defenses, which combined to allow 999 yards in the back-and-forth affair.

Auburn, behind 148 yards on 27 carries from tailback Cameron Artis-Payne and 248 yards passing and four total touchdowns from quarterback Nick Marshall, put up the most points Ole Miss has allowed all season, the final touchdown coming on Artis-Payne’s 6-yard run to go up 35-31 with 10:23 left.

Ole Miss took advantage of the SEC’s second-worst pass defense with quarterback Bo Wallace finishing 28 of 40 through the air for 341 yards and a pair of scores. Treadwell, Vince Sanders and tight end Evan Engram combined to be on the receiving end of 331 of those with Treadwell and Engram each hauling in a touchdown.

The Rebels tried to answer Auburn’s go-ahead score immediately, driving to Auburn’s 6-yard line in eight plays on their ensuing possession. But Wallace fumbled at the end of a 5-yard run, and Frost pounced on the loose ball to end the threat.

“All night, I’m getting drove back, and they’re not even blowing the whistle. All night it was like that,” Wallace said. “But I’ve got to hang on to the football.”

Ole Miss led 17-14 at the break and pushed the lead to 10 when Wallace found Engram over the middle for a 50-yard catch-and-run score early in the third quarter. But Marshall’s 2-yard scoring run on the Tigers’ next possession cut into the lead, and Auburn followed it up with a 96-yard drive capped by Marshall’s 17-yard pass to Marcus Davis to go up 28-24.

“We didn’t play our best,” cornerback Senquez Golson said. “The secondary, we gave up a lot of big plays. The offense played well. We’ve just got to finish.”

Wallace got the lead back for the Rebels with a 3-yard touchdown run on the second play of the fourth quarter before Artis-Payne’s score put the Tigers up for good.